I was going through my photos today and realized, oops, I forgot to tell you all about our day out last weekend at the Long Beach Greek Festival 2011.

The kind Greek goddess that wristbanded us for beers at last year's Long Beach Greek Festival.

Let’s see, what is there to tell? Well, the festival is held Labor Day weekend annually; they serve beer (Opa!); admission on Mondays is free; we can park in the neighborhood and walk to it, or you can take advantage of the free parking off-site and shuttle in for free as well; T loves the games and the rides, especially the ring-the-bell/ win-a-prize and the ride-on helicopter; and we generally just eat ourselves silly. When in Greece!

Sadly, I didn’t get a lot of photos this year, just this lone photo of my pita sandwich. It’s called a Lamb-O-Rama pita, and it’s delicious. It’s got all the makings of a gyro with the usual tomatoes and onion, but then it’s kicked up a notch with a zesty feta (made from feta cheese, tomatoes, and red bell peppers), and on top of that there are French fries stuffed inside. Think California burrito, but Greek-style. Thankfully Athens West is a local restaurant (Seal Beach and Huntington Beach locations), and they serve this up not just at the Greek Fest but at their two restaurants year-round. So next time I begin to think about it’s spicy deliciousness, I can get myself to the source.

This year the dads were kind enough to run the kids through the midway game and ride area, where they gamed and rode themselves silly.  The moms sat in the shade, drank, ate, listened to live Greek music nearby, and chatted. It was lovely, but it was hot. Very hot. When the kids and dads returned they look beat up. And even in the shade, after two hours we were all done. That’s Labor Day in Long Beach for you though (high 80s and this year, add humid to the mix, ugh). 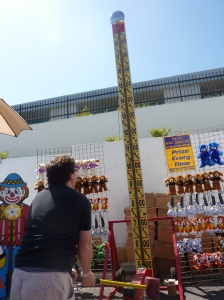 Thank you, Long Beach Greek Festival! While we might have ended the day hot and sweaty, we definitely didn’t go away hungry nor did we ever get thirsty. T also left with his obligatory inflatable hammer prize in hand from the ring-the-bell game (great job again this year, C and T!). In other words: Efcharisto!