I thought I’d wrap up my first week back to the blog in this new year with my first of what looks like will be a few (OK, several) posts about our recent family vacation in Hawaii! 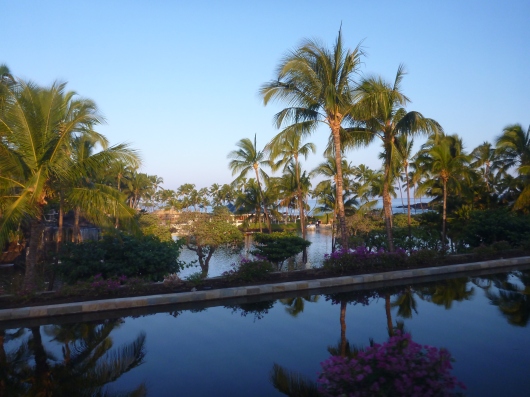 Ah-lo-ahhhhh! This familiar view welcomes us back to Waikoloa on the Big Island of Hawaii along the Kohala Coast about 20 miles of Kailua-Kona.

C, T, and I spent the final week of Winter Break 2012-13 on the Big Island of Hawaii. Yes, we were there earlier this year also, and I realize that some of you might be reading this and saying, wait, WHAT?! Well, let me just say this. It was a VERY last-minute decision to go back so soon. And by last-minute, I mean C asked me sometime in November what I would think of going back to Hawaii over New Year’s since we had more than enough miles and hotel points for a week’s vacation. I thought about it for about a minute or two and said sure, why not (and DUH)! 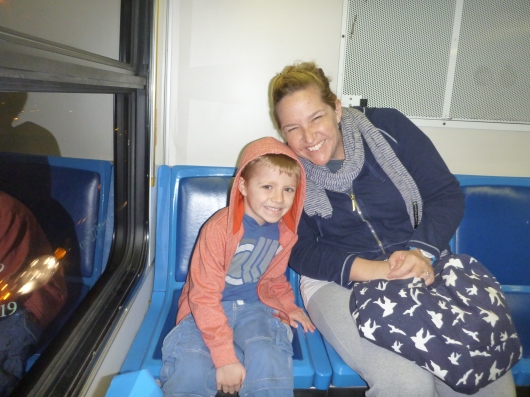 Good (early) morning! T and I ride the LAX shuttle from parking lot C in the wee hours of Saturday morning (Dec. 29, 2012).  I know, a scarf for my Hawaiian vacation is pretty ridiculous, but  it was COLD (40s) the morning we left. I even wore shoes and socks (the only pair of socks the entire trip, I promise you that much).

Turns out C’d been keeping an eye on the airline ticket and hotel availability for reservations that would accept airline miles and hotel points. Normally, these sorts of bookings don’t even become available until the last-minute (in travel speak) over such busy travel periods, so when you see that they are open, you need to act (and book) quickly. Done and done!

Hey boys! Hope you enjoyed being seat buddies for five or so hours. Meanwhile, I enjoyed my solo start to the vacation just across the aisle!

On the ride over, we were on United Airlines. We were able to get a first-class booking for the three of us on our first choice of day and time for fewer miles than our return flight later booked on American in coach on a red-eye that was the last three seats together open for the second choice of flight we wanted. I know that it seems really weird (and wrong) that first-class anything would “cost” less than coach, but see, most folks were already over there by the 29th of December; it was the return flights that were VERY crowded. And it goes without saying, but when you’re using miles and points, sometimes you must get creative and check various carriers, not be married to a certain brand, or committed to certain dates and/or preferences. Again, not a problem at all for us; we’re flexible as long as we can get where we want to be (and of course, get back home at the end!).

Inside the United Club at LAX. Sorry it’s not a better shot, but I was busy making sure T stayed away from viewing CNN (thanks again to the staffer who changed it to Super Why) and refilling my juked-up coffee.

Additionally, C happened to have four passes for the United Club (we flew out of LAX). We signed up for the Chase United MileagePlus Explorer VISA credit cards a few months ago (yes, the cards advertised on TV by that annoying guy), and along with a nice miles bonus were a couple of free first class lounge passes (click here for a link for the best bonus available on this card; you need to scroll down to item 9 “United Airlines” to click through to the actual page to sign up). Even better, the United Club didn’t require a pass for T, so we were able to save the other two passes for another day. Nice! Of course, the benefit of lounges like United Club is free food and booze. Yes, we had an 8:15a.m. flight, but it’s a bar stocked with plenty of options to juke up your morning coffee. I’d be lying if I said I didn’t take advantage of that. I’d also be lying if I said T didn’t partake of a few of the free donut holes as well.

Captain T, clearing us for take-off!

As you can see, United hangs pretty loose with the little dudes up in first class. In fact, they seem to put them right to work (but only if you ask really politely). No, really, before we took off, along with T getting to sit in the captain’s chair (complete with captain’s hat), the captain announced his thanks to T for assisting with the pre-flight checks. Of course, C and everyone else around us heard the entire announcement, all while I was messing around with my iPhone music or book, or something or other (free drink perhaps?), which caused me to miss it entirely. Oh well!

It’s a Mele Kalikimaka even a few days after the fact at the Hilton Waikoloa Village on the Big Island of Hawaii. Again, not a great shot, but one of the only ones that semi-turned out from my quick iPhone captures on-the-go.

We landed mid-day in Kailua-Kona (KOA) right on time. We didn’t start our trip with a rental car, so we shuttled to our Hawaiian home-away-from-home, the Hilton Waikoloa Village. Booking this part of the trip was wide open; however, we were unable to receive the Hilton Gold room upgrades we’d become accustomed to because of the hotel being at pretty much 100 percent occupancy the day we arrived (totally understandable and once we hit the pool, very obvious!). They also still had most if not all of their holiday decor up, including their Christmas tree in the main lobby and a lot of lights on in the evening near the main entrances at the driveway and parking lots. It really was lovely to see Christmastime in Hawaii, even if a few days late.

Happy Hour at Merriman’s Market Cafe in Waikoloa on the Big Island (HI). I believe this is a Limeade Cooler cocktail, but don’t quote me on that. It was my second (or third?) of this particular happy hour outing. Cheers! 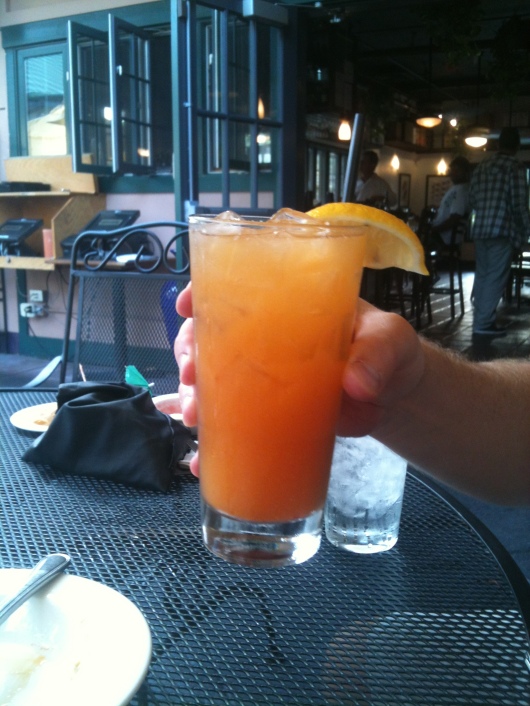 C got the Chi Chi at Merriman’s Market Cafe. At $4.95, it’s an insanely good value for anywhere in the Hawaiian Islands (no, really!). 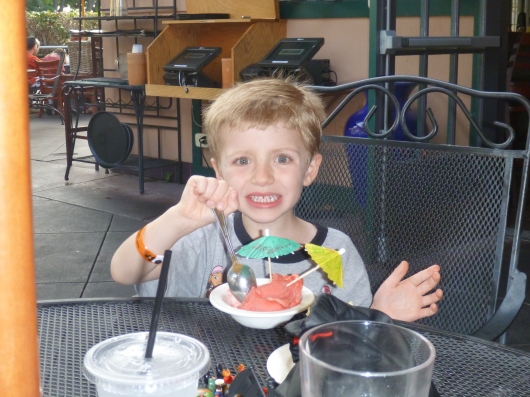 T got the raspberry sorbet… the kind you find in a happy hour bowl only at Merriman’s Market Cafe in Waikoloa (HI).

After checking and settling in, we grabbed some happy hour at Merriman’s Market Cafe just down the road from our hotel in the King’s Shops (mall). It’s one of our faves for cheap happy hour drinks and small plates and a fave of T’s for the ice cream. After that, we stocked up on room eats and drinks across the street at Island Gourmet in the Queens’ MarketPlace and hit the pool for a short time once back at the hotel. We wrapped up with dinner in-room thanks to some great sushi finds (fresh ahi poke namely) at Island Gourmet and a dish of hot mac-and-cheese for T with a side of fresh fruit for all of us. It was a perfect, easy go-to (and take-out) for our busy travel day, along with it being a wonderful surprise to get sushi SO GOOD from essentially an “ABC”-style grocery/convenience store! Sorry I don’t have any pics of the sushi; it was so tasty that I couldn’t stop for anything, including pictures!

C and T head out in search of new Hawaiian adventures. Stay tuned for more next week!

We slept pretty well that night and woke up Sunday early; the time change – although minor, only two hours back in winter – is just enough to mess you up for 1-2 days, especially with a wee one in tow. Despite the early wake-up, we were more than ready to get going on our first full day of our winter Hawaiian vacation. I’ll tell you more about it starting next week. Until then, Aloha!