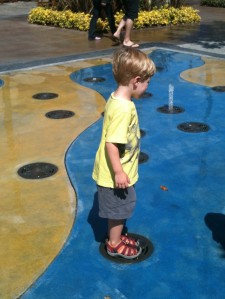 T and I had planned to go to San Diego last weekend but the big power outage of 2011 put the lights out on that plan in a split-second. So my mom came here last-minute instead for a 24-hour turnaround visit. We had absolutely no plans because of the last-minute nature of things, yet sometimes those days wind up being the best days ever. This was one of those days for sure.

A year or two ago a friend of mine passed along the concept of the “gift of the ordinary day” and I’ve never forgotten her words. All that means is to just enjoy whatever life throws your way, even if life throws you nothing at all; it’s just being in or observing upon life as it happens around you. Her words have become a gift to me in that it helps me cherish the little things in life that much more, especially now that I am a mom and have a lot going on around me to be involved in or observe.

Our ordinary day began when Mom met T and I at swim class. I told her that after swim I needed to head to Party City to take a look over their birthday garb (T’s birthday is coming up fast, so you are going to see a reference here and there to birthday shopping, planning, and other related mayhem – enjoy!). Our closest store is at Long Beach Towne Center, which was right where we wanted to be for lunch (for, what else, Chick-Fil-A!).

With the Party City outing being a bust other than a fire truck water bottle and wooden airplane for T (in other words, nothing whatsoever for the birthday, oops), we moved on over to our next stop, “the motorcycle place.” This is T’s nickname for the arcade on premises, AKA Power House. We spent a while in here (almost an hour), and the funniest part is we hardly ever put money into the games; T mostly likes sitting on the motorcycles, cars, and other riding video games. What is nice about this particular arcade is that the owners organize the place well by tucking the violent-leaning games (guns and whatnot)  into the way-back of the place, making it super-easy to navigate the place with the little ones and completely avoid those age-inappropriate games altogether (versus an hour full of “NO!”).

T throws down at a game of Bowlingo.

But this time we did pony up about $5 worth of plays, which included one of our favorites, Bowlingo. This is a miniature bowling game where the balls are about 1/3 the size and no finger holes to worry about with a three-year-old. We always just split one game since we are dealing with the attention span of, well, a three-year-old, but this time T was so much more into it. Maybe it was the strike he threw on his first roll out, or maybe it was just luck, or both.

After the arcade, we headed into our tried-and-true lunch spot, where we must have hung for just over two hours. That would definitely be a new record for us, but it was easy since I had my mom to chat with as T played with a rotating group of kids for 90 minutes of the time he wasn’t eating his meal. During this time, I also came to a huge decision in that I booked T’s birthday party during our visit. T was pretty excited by this news as I don’t think he knew you can have parties there. Well, that’s one birthday mission accomplished at any rate!

From here, we headed back to the mall’s outdoor play area, where T ran through the pop-jet fountain, rode some coin-op kiddie rides, and played on the playground. He was just having so much fun with Grandma, who in turn was having as much fun watching and playing with him. I then thought, what better way to cap off this outing than with some ice cream; it was easy to come up with that idea though with a Ben & Jerry’s right around the corner from the play area, a no-brainer really.

As we were heading home from our five-hour, fun-filled day, we ran into some friends who were just getting their play date started with a playground outing and after that a book-reading at the local Barnes and Noble. As for dinner, I’ll give you one guess where my friends were taking their kiddos to dinner afterwards….

Long Beach Towne Center offers everyone a day filled with fun and entertainment.

Overall, not a bad day for a day we’d not planned on having: Truly ordinary yet truly fun. Yep, truly a gift indeed.