Ever had a day where you realize things might be going OK, but then once you stop to check yourself you realize pretty much everything you’re doing is the opposite of what you’d intended? And then as the day unfolds, things just get crazier and crazier? Well, we had one of those days around here last Friday.

First off, C was home on his 9-80 day off as he is every other week. However, the difference with this day off was that we really hadn’t planned an activity for us to go do as a family (we usually do). The forecast was rain (I know, but we’re So Cal wusses when it comes to weather) and why we’d left the day pretty open except for a couple of morning appointments (a small salon appointment for me; haircuts for the boys). It did rain as predicted, but not terribly much in the end, but it was enough to keep us Long Beach-bound for the day (boo).

Next, there was the initial getting-out-of-the-house process. This has become such a Broadway production of sorts for T and I, so much so that it always seems that even if I say “we’re leaving now” that really means 15-20 minutes after that statement. I really feel as if we do need a stage crew to get this show on the road – RMT’ers, you know exactly what I mean, right? Anyway, my usual pre-departure checklist for T is consistent and short all things considered. It includes but is not limited to: fruit with breakfast; brushed teeth; and brushed hair. But as I mentioned, this was not a usual morning, at all. C fed T breakfast and it turns out that the menu was a triple carb-fest of sorts, yet it unfortunately did not include simple carbs like, well, fruit. Strike one. Then because I was leaving in my direction solo and without T, and C was taking T for their haircuts… yep, that’s right, no bathroom stop for T before exiting the house, which meant no teeth or hair brushing. Ah, yes, strikes two and three (and, eww). Well, OK, at least T was heading off to get a haircut, so he got his hair brushed there (right?)… alright, that last strike was just a foul ball. Nice save, boys.

After our respective appointments (which all went very smooth by all reports, maybe because we weren’t together?!), we met back at the house. As I walked inside, I saw the boys putting together a new LEGO fire truck. It was just a small one (130 pieces I think?), but where did this come from? After finding out T hoodwinked C into a special Target run for a toy, I expressed my, um, disappointment regarding that excursion. However, I now know I can get out of taking the boy to Target for about a month or so without argument (yes!). And of course, there is a bright side: Lovely rainy-day time for father-and-son. OK, I can’t be TOO upset about that now, can I?

Then the three of us headed out to lunch. We went to one of our favorite spots in town, where C and I promptly ordered adult beverages. When we went to order our food, the server asked T if he wanted fries or fruit with his meal. Really?! Whatever happened to asking the parents of said four-year-old that kind of question, but oh well. And so with another fruitless attempt toward healthy eating, we went about our meal (and T didn’t even eat the fries – really?!).

Once we returned home, C and T finished up with their impromptu LEGO project, which was then supposed to be followed by rest time. Yeah, well, that rest attempt was a big giant fail. It took absolutely forever to calm T down, and getting him to stay inside of his room was pure comic relief. And then once he finally did go rest, one of C’s colleagues came by the house. While C’s buddy didn’t stay long, it was long enough to rev T back up. Needless to say, Operation Rest Time was a mission scrubbed. Sigh. 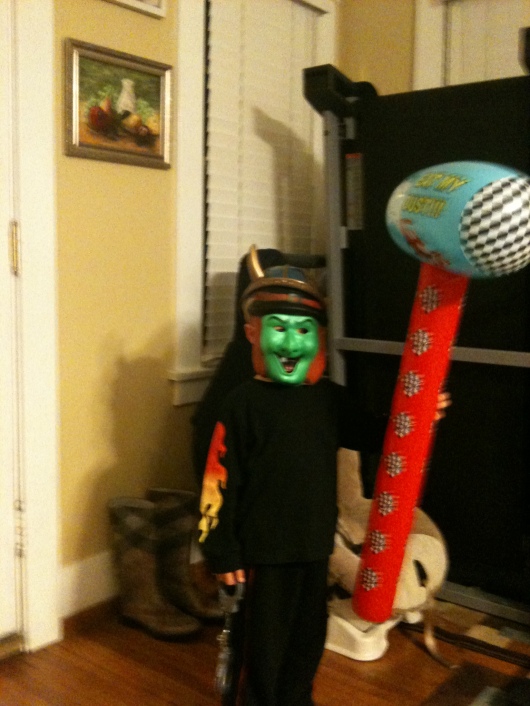 Our little witch viking... sorry it's blurry. We were having fun, and the wine was open.

Finally, C and I decided that the day had gotten so off-course why don’t we just invite some people over to hang out and have dinner; C was making spaghetti with homemade sauce and planned to open a nice bottle (or two) of wine, and what better meal to share with friends. Of course, the people invited included one little person for T to play with, which thrilled him to bits.

But then I had to stop and ask myself… did we just reward T for all the havoc wreaked on the day thus far? The answer both C and I came up with was no, and no because most if not all the decisions made were not T’s doing but all our doing (or lack of doing). And in the end, how bad was it? Not bad really, just a silly, “off” day, all things considered. 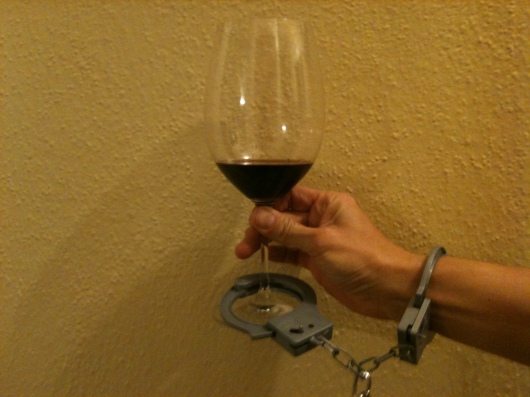 For those times when a wine charm just isn't going to do the job....

It goes without saying the day ended more right-side up than we could have ever envisioned. We ended our day with a tasty meal surrounded by great friends; the adults got to talk and drink uninterrupted for a good three hours (when on earth does that ever happen?!), all as the kids played together and giggled themselves silly (we got quite a pre-meal performance from the kids, good times). And can I honestly tell you whether the kids ate fruits or vegetables with dinner – no, not really, and that’s OK. Cheers!

I can’t wait for the next upside-down day around here, and I bet T can’t either.