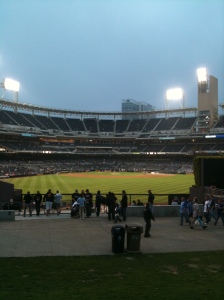 The view from beyond the outfield at San Diego's Petco Park.

Last week T and I went down to San Diego for a visit with Grandma/ my mom. I was born and raised in San Diego and my mom still lives there, which makes it fun to take T back to visit and see places that I went to as a kid. But sometimes there are even a few places he now gets to go to that either I never knew about growing up or just plain didn’t exist when I lived there. This particular trip was centered on taking T to one place that I can only wish existed when I was a little girl: Petco Park.

The peek-a-boo scoreboard view from the bleacher seats at Petco Park in San Diego.

While it was the second-to-last home game of the season for the San Diego Padres, I have to say I am glad we waited until this time and this age for T to make this first visit for many reasons. First off, the Padres had a terrible season, which meant that tickets were freely available last-minute. That worked out great for us since we didn’t buy anything ahead of time as this was a very last-minute decision just days earlier. Second, with T being almost four years old, he could enjoy some of the interactive playing that the stadium has to offer, such as the kids’ ballpark area. Finally, staying up for a night game every once in a while isn’t as destructive to T’s (our) routine as it might have otherwise been had T been an infant or young toddler. In other words, it wasn’t a Broadway production to get there (i.e., no stroller necessary), nor was it too long of a visit or over-stimulating to where we’d later regret rather than enjoy the outing. 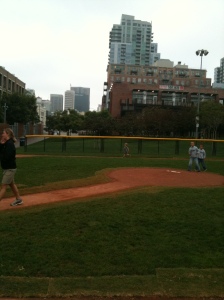 So at 5:30pm on the last Tuesday night of the season, we walked up to the box office and had our pick of whatever ticket we wanted, or at least the tickets we were considering. We were stuck between getting simple “park-in-the-park” tickets for $5 a piece, which just got us into the game’s open park space, no assigned seats, and no guarantee of seeing the game live; or $10 bleacher seats, which were actual assigned seats with unobstructed game views. After talking to one of the ticket agents, we learned that the bleacher seats reside in an area of the outfield next to a sand play area, which T later referred to as “the beach.” It’s a family-friendly area where kids can play safely contained and adults can supervise, but at the same time still enjoy full-view of the ball field with adult beverages in hand. Game over, and decision made.

T moving over a bit to check out Aunt Kay's brick at San Diego's Petco Park.

After entering with our bleacher seat tickets, we took T over to the brick that my mom purchased for her sister back when the old ballpark closed to Padres play and Petco Park opened. I’m pretty sure T had no idea what we were doing other than walking on some cool bricks, and that’s OK. We’ll show it to him next time, too.

T goes down swinging - and gets a few hits! - at Petco Park's park-in-the-park ballpark for kids.

We then made our way into park-in-the-park for a pre-game visit and took advantage of all the park had to offer. T got to play ball over at the mini-baseball diamond, where staff pitched wiffle balls to the kids and a make-shift game came together as kids made their way on and off the field taking turns hitting and fielding. T got a hit each time he battered-up, and he absolutely loved running the bases.

After that we headed on over to the Tony Gwynn statue. Because the statue sits atop a grassy knoll area of this vast park space, it was hard to get T to stand still with Tony for a photo opp, but I managed to capture the moment as it happened.

Is it a swing? Or is it a seat? T spins wildly at the tot lot in Petco Park.

We then rolled over (literally, kids including T loved rolling down the grassy hillsides) the backside of the park and let T play in the tot lot area. A lot of the equipment was newer-design and stuff he was used to from some local parks of our own, so I think he felt right at home. But there was this one swivel-seat swing thing he really took to, and we were a little concerned we weren’t ever going to get him off of it to go into the game. Needless to say, T spent a lot of time enjoying that and taking turns pushing others in it, too.

Once game time approached and the sun began to set, we made our way to our seats. We had been lucky enough to buy front-row to be as close to the sand area as possible, but the way the seats were built our legs were dangling freely without any real support (very uncomfortable). Thankfully it wasn’t crowded so we just stayed back one row, where there was a nice-sized grassy strip of leg room, almost wide enough of an aisle to picnic there if we wanted really. Even in the second row we were still plenty close to be able to keep an eye on T, watch the game, and enjoy ourselves. Oh and just a side note to parents: Adults are not allowed to play in the sand, only kids. Even more reason to sit back and relax – it’s a rule to do so. Cheers to that! 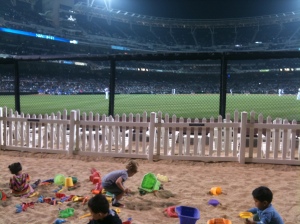 T digs in during the Padres-Cubs game out in the bleacher "beach" area of San Diego's Petco Park.

I know this post isn’t the best timed in that MLB regular season just came to a close, but for locals, the game is not over completely. We learned that park-in-the-park remains an open public park space downtown (tot lot and grassy areas) during the off-season. So no matter when you find yourself in downtown San Diego, try to swing by Petco Park; it’s a guaranteed hit.