I hope you all had a wonderful Thanksgiving, RMT’ers! And for those celebrating Hanukkah, a very Happy Thanksgivukkah indeed!

Just one of the gorgeous bouquets we received this Thanksgiving from our gracious guests. 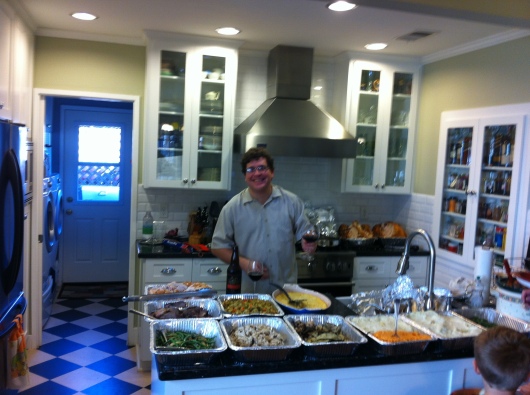 C shows off his Thanksgiving/Thanksgivukkah spread. It was ab fab as usual, and then some! Mmm! Thanks, hon! xo

“Thanksgivukkah” was the blended term bestowed to the first few nights of this year’s Hanukkah holiday here in the States given that it commenced over Thanksgiving Day and the following weekend for the first time since 1888 (and the next time a similar overlap is set to occur will be 2070). I loved it. I’ve been wishing folks a very “Merry Chrismukkah” and “Happy Hanumas” for years now (decades actually, my BFF from Jr. High can back me up here, too) as the overlap of Christmas and Hanukkah is much more likely to occur. So of course it was natural that when these two holidays overlapped that someone merged the greetings together as well. 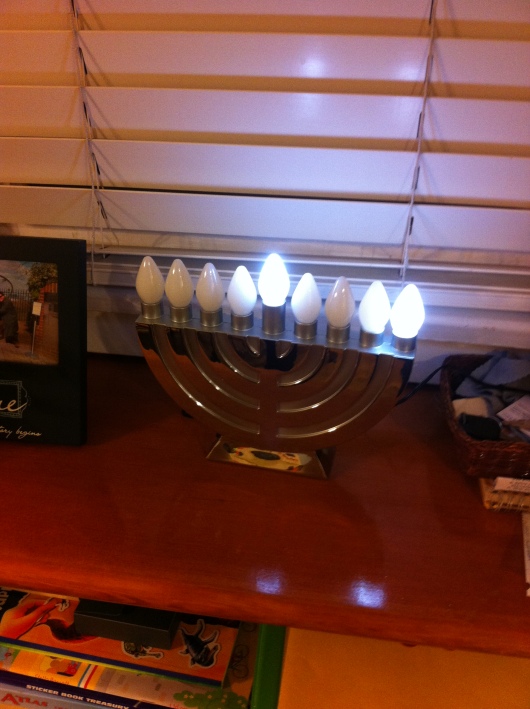 The first night of Hanukkah fell the night before American Thanksgiving this year, so we decided to get into the Thanksgivukkah spirit! 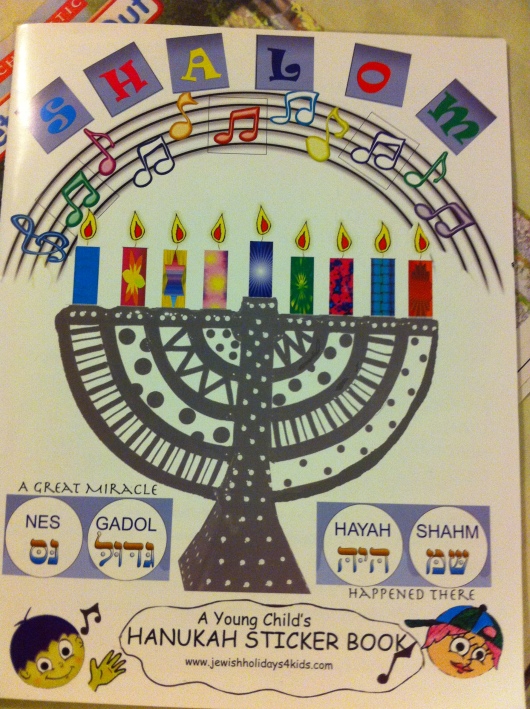 A wonderful resource for Hanukkah, and not just for the kids!

And merge them we did, too! Last year at the end of the holiday season when I first heard about the early arrival of Hanukkah this year, I picked up a menorah at Target for around $10 (orig. $45). It plugs in and lights with the touch of a button (push the button 1-8 times depending on which of the eight days you’re celebrating), which is good as we’re not really Jewish (Recovering Catholics, actually) so I’d have no clue as to how to light a menorah properly or what to say while doing it. Though I did pick up a nice little activity book for T at Gelson’s that had the “Blessings on the Menorah” written out phonetically for me to fumble through (and my friend recommended this website with an audible reading of the blessings, which was even better!).

Our friend helped the kids light the menorah on Night Five during a small Hanukkah gathering at their home.

T’s turn with his little friend.

Best photo of the evening! 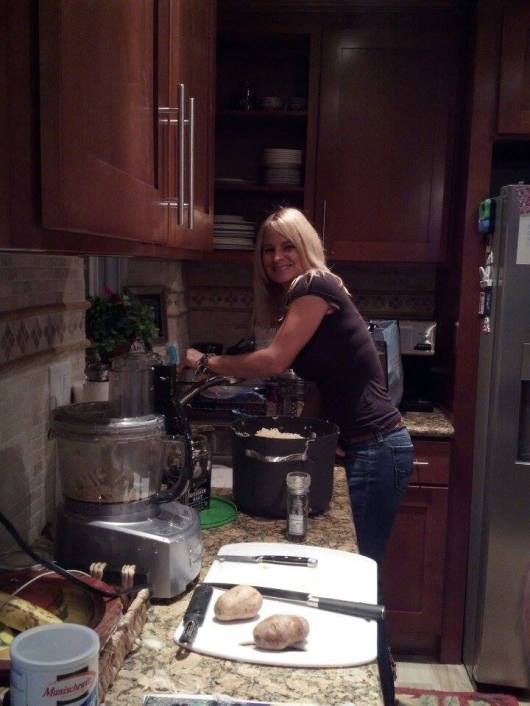 My awesome friend making latkes from scratch. Forget frozen substitutes. This is the only way to eat latkes, RMT’ers. Oh, and there are no photos of any of the six I ate because I could not pause to take a photo. So sorry (eh, not really). 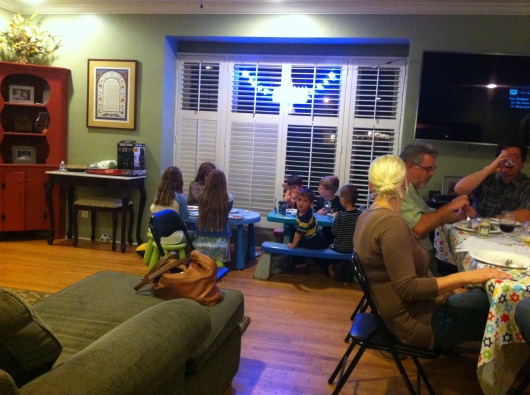 The kids are sitting and eating. This was the only time T sat down for the 5+ hours of our visit.

So why if we’re not Jewish are we even acknowledging Hanukkah let alone buying a menorah? It’s because many of our close friends happen to be celebrating, Jewish or not. In fact, many of the holiday parties we attend each season happen to be more Hanukkah than Christmas-centric. It’s just how it is, and it’s a-OK with us (um, latkes anyone?!). Seriously though, since we really don’t observe a specific religion in our own family, we are open to many of the traditions that other family and friends observe as a way to expose T to all different beliefs in a fun and educational rather than obligatory, ritualistic way. 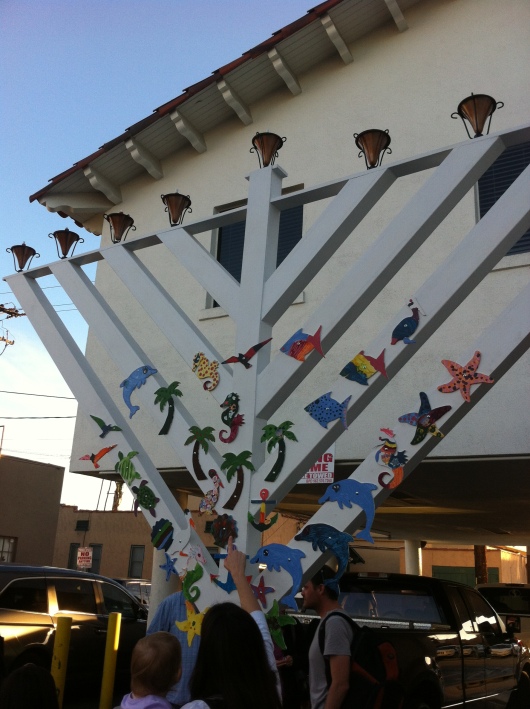 T’s friends made the dolphin on the upper left (second candle in from left) and the multi-colored anchor center-right.

The Shul by the Shore’s Rabbi Abba Perelmuter spoke to the crowd at the public menorah lighting Sunday.

Lighting of the Shamash, or the center “helper” or “leader” candle on a menorah. It’s usually then used to light all the other candles, but in this case with this menorah being so large the candle lighters just lit each in order with the specially crafted extension lighter directly. 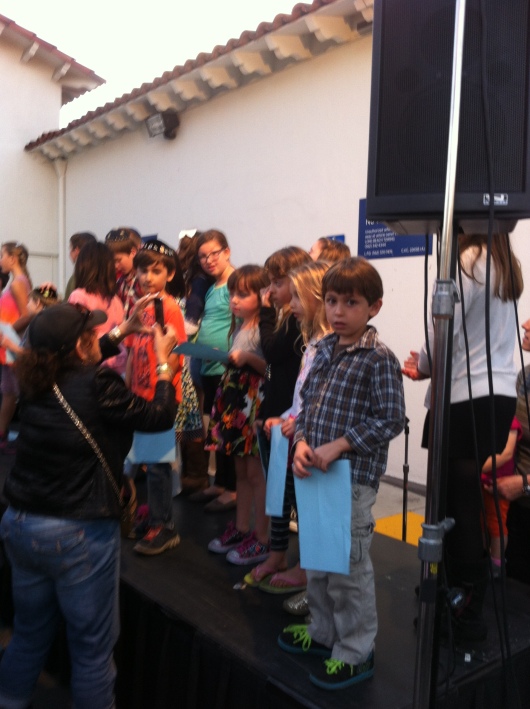 T’s friend is on the right and wasn’t too happy with me taking his picture. Gotcha E!

On Sunday evening, we also attended Belmont Shore’s first public menorah lighting sponsored by Shul by the Shore in Long Beach and hosted by Citibank’s Belmont Shore branch. A crowd gathered in the bank’s parking lot on 2nd Street to light a large handmade wooden menorah built by congregation members and decorated by the kids of The Shul by the Shore’s Hebrew School programs. Some of the same children (including some of our friends) were present and led the crowd in traditional Hanukkah songs as community leaders helped light the candles (Sunday was Night Five). There were also small goody bags for the kids in attendance, and cookie decorating, jelly donuts, and snow cones for all ages.

T enjoying a snow cone. As in, “Mom, stop taking pictures of me eating this snow cone.”

More sugar, this time T noshes on a jelly donut. He wasn’t so much into the jelly parts as he was the donut parts (of course).

OK, so I normally wouldn’t show a picture of a raffle ticket. However, this was T’s raffle ticket, and they pulled the number just before AND just after his. They only pulled four tickets. Bummer, T!

Mmm… jelly donuts. Check out our little friend getting his. He even made the local paper! Enjoy that donut and your 15 minutes of fame, J! (Photo Credit: Christian Randolph, Long Beach Register Dec. 2, 2013) 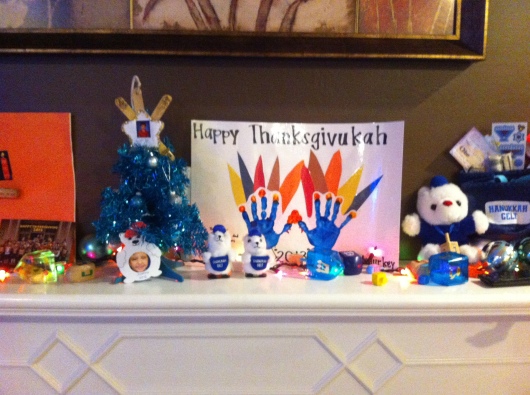 Part of my friend’s Thanksgivukkah mantle. I love the “Menurkey,” don’t you?!

I know not everyone observes Hanukkah, but to those celebrating and eating their way through this holiday period, I hope yours has been happy and filled with hope and light. And tasty treats, too!