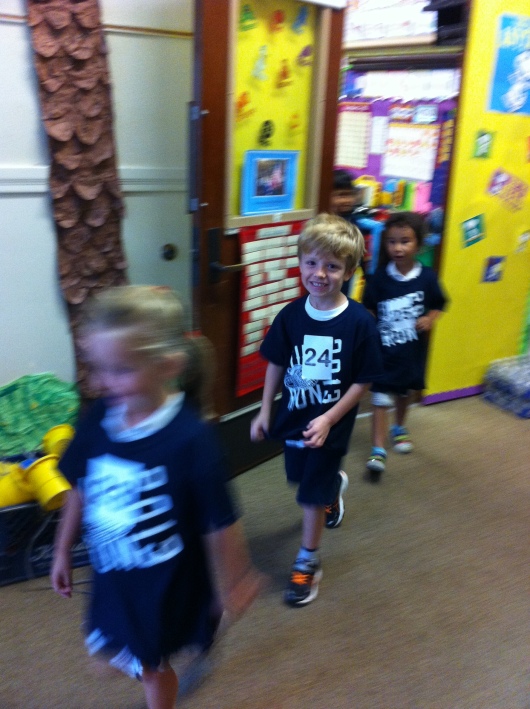 T and his class make their way out to the playground for their annual jog-a-thon! Go #24!

For those of you who have no idea what this type of event is and/or were not with RMT during T’s first jog-a-thon last school year, a jog-a-thon is a fundraising event that many schools hold annually to encourage participation across all grades by way of a health-focused fundraiser. Students garner financial sponsors (in my day it was money per-lap run, while now it’s mostly flat-rate donations) and then show up the day of the event to run around a loop with their grade level. Along with prize levels for reaching monetary milestones, students also strive to run as many laps as possible, and those are also counted toward another set of prize options (raffle tickets, trinkets, class goal ice cream parties, etc.). The school raises money as the kids raise their heart rates, and regardless of which students leave with a prize, in the end everyone’s spirits are raised from a very fun (and long) day of community cheerleading for the school in whole. 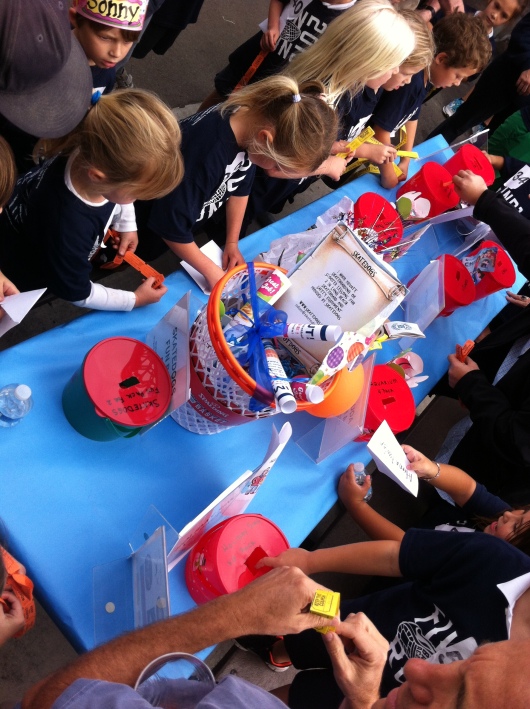 Kids from T’s class drop tickets into the prize buckets for a chance to win some great prizes at their jog-a-thon. 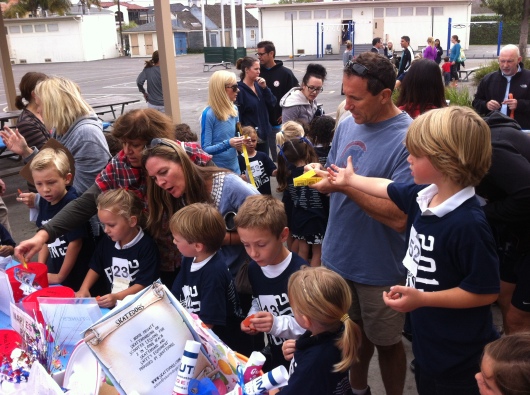 Last year, T’s school gave each child a token prize for every so many laps run. This year, we discovered that his new school runs the event a bit differently. For every so many laps each student earns raffle tickets that they can then place into drawings for specific prizes. So let’s say a child runs 15 laps; that means the student can drop one ticket into 15 different prize buckets, or take all 15 tickets and drop those into one prize bucket that they REALLY want to win. Some prizes were single-entry only (i.e., schoolwide drawings across all grades, which consisted of a bike and some other totally awesome high-dollar prizes) and others were smaller take-away prizes that were grade-designated and allowed only those specific students to enter multiple times of their choosing. 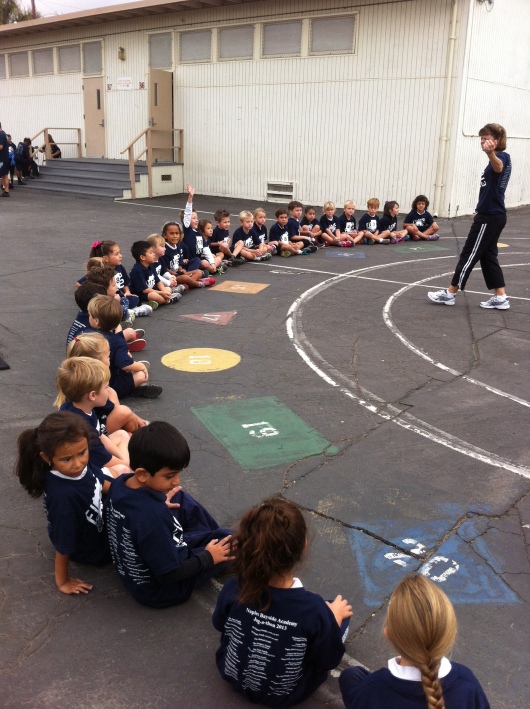 Mrs. K talks up the class with an explanation of how a jog-a-thon runs. 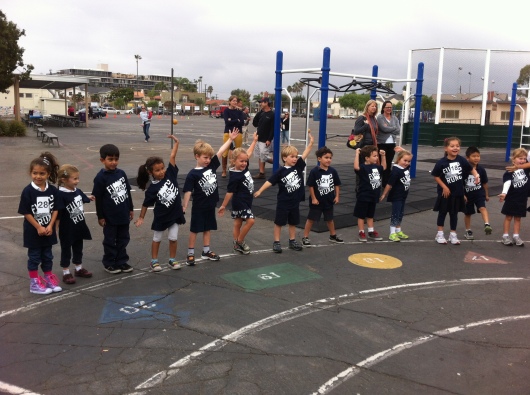 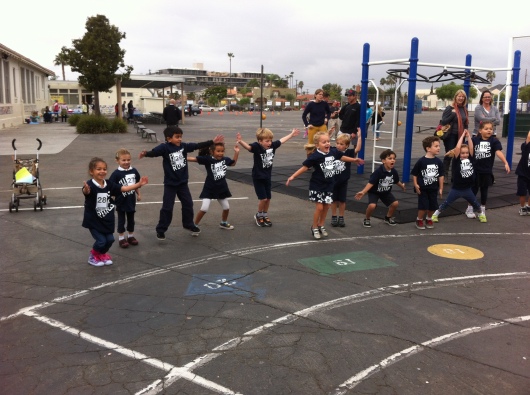 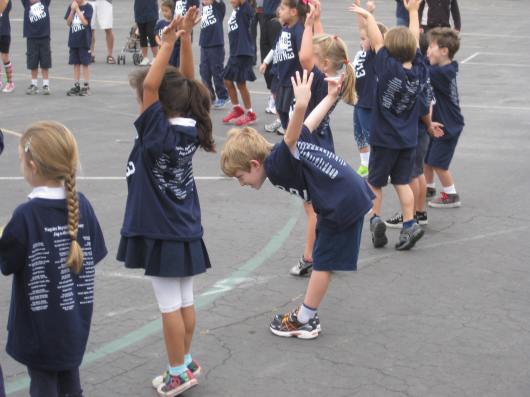 The Transitional Kindergarteners and Kindergarteners were the first runners of the day! While I counted laps for a few students in T’s class, Grandma Beep took some photos of T in action for me (thank you again, Grandma Beep!) and cheered T and his classmates on along with the rest of the parents, family, and school staff in attendance. One classmate in T’s class even was lucky enough to have his dad show up on his fire truck to help cheer on the joggers! 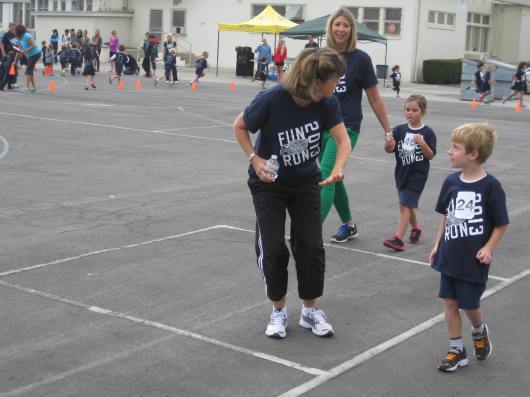 T caught up with his teacher during his jog-a-thon! 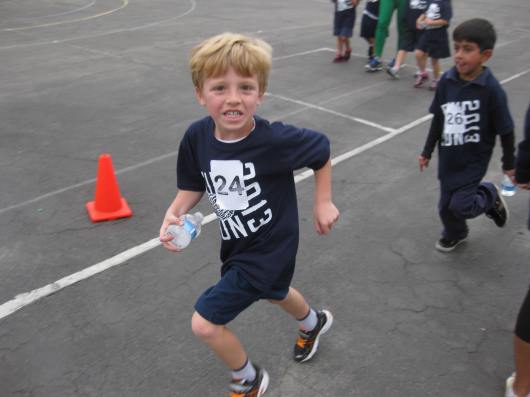 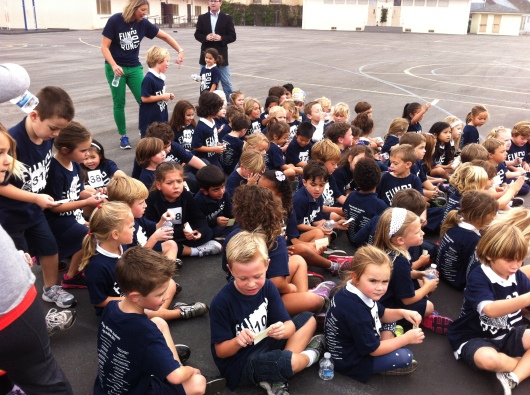 After about 20-25 minutes of running, the kids settled down with waters and snacks. 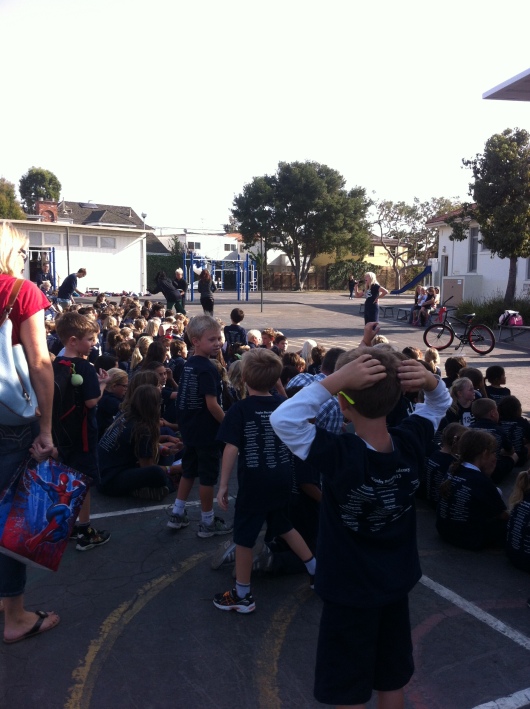 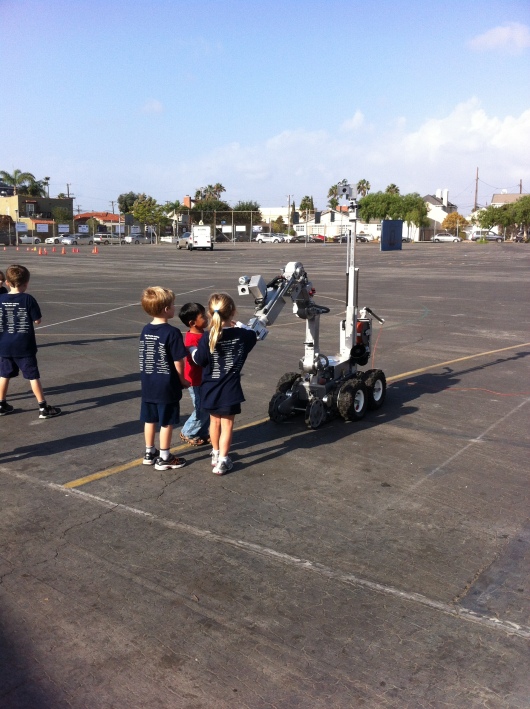 Some of the students enjoyed the police equipment on display as PTA members drew winners at the jog-a-thon prize rally. 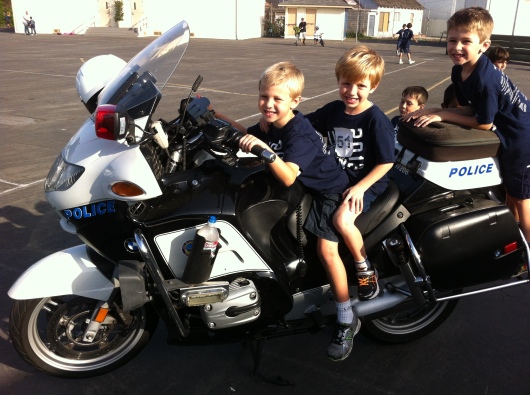 At the end of the jogging part of the day’s events, the jog-a-thon committee held a prize rally to celebrate everyone’s contributions to the jog-a-thon. This was also when they drew all the names from the raffles. Whether or not the kids won or lost, they all had fun sucking on ice pops and exploring some of the police props that pulled in for the wrap party.

Jog-a-thons tend to be hugely popular fundraisers for schools due to their low overhead; in fact, this event is our school PTA’s second most lucrative fundraiser of the year. We found out Monday morning that the event exceeded its goal and raised more than $30,000 from corporate advertisements, individual sponsors, and other grass-roots donations. WOW! All monies given toward our school’s jog-a-thon will go directly toward PTA-sponsored programs, such as our computer lab and its instructor along with other extra-curricular programs, after-school classes, and special family-oriented activities scheduled throughout the year.

T’s part in this: Last year he barely broke the $100 threshold in sponsors; this year, he raised $150, including donating $3 of his own money. His school encouraged all students to give a little something themselves toward the cause as a means to help them understand that it takes donations of all amounts – and from all kinds of folks, not just big companies – to help run the wonderful events and programs that they’ve come to enjoy year in and year out. I really enjoyed this focus, especially as we approach this season of giving and gratitude. 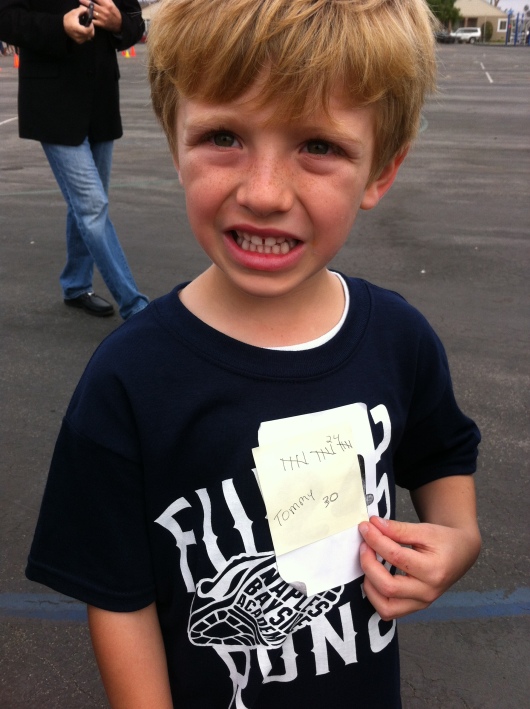 To decode the note on T’s chest, he ran 15 laps, he was runner #24, and he received 30 raffle tickets. All the Kinders received 30 tickets rather than take the time to explain why we were taking some out of their envelopes. It was just easier that way.

T would like to thank these family members for their generosity toward his to his jog-a-thon efforts this year (and don’t be surprised if he hits you up again next year either!):

If anyone would like a good old-fashioned phone call from T for an upcoming Sees Candy fundraiser just in time for the December holidays, let me know and I can hook you two up.