New Year’s Day 2013 started with C picking up our rental car. At long last, we’d have a way of getting off the resort. While it was wonderful to settle in and relax for several days at the start of our trip, getting off-resort is something we very much look forward to, especially when it comes to beaches.

New Year’s Day 2008. T was just under 3 mos. old in this photo (and snugly tucked in our BOB stroller… still sort-of can’t believe we did that!).

Also, a family tradition of ours every New Year’s Day is to go to the beach. If we were home that’s where we’d have been headed… walking or biking at the beach and digging in the sand. It’s just become something we’ve done annually since T was just less than three-months old and we took a walk down at our local beach New Year’s Day 2008. I don’t think it’s something we ever consciously planned, but it’s definitely become an annual family tradition.

A peek out from our shady spot on the beach New Year’s Day 2013.

Luckily we could continue the tradition on this vacation since it’s Hawaii; after all, the Big Island is surrounded with wonderful, beautiful beaches of all kinds. From black sand to sugary fine, white grains, life’s definitely all beach for Hawaiians no matter what mood strikes. 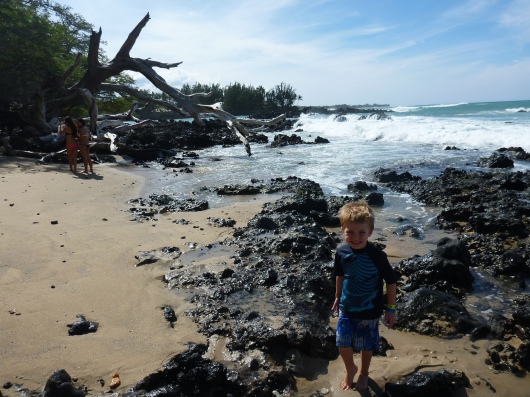 For our New Year’s outing, we chose a spot we’d discovered on our last visit. Unofficially known as “Mile Marker 69 Beach,” this cove is part of the Hapuna Beach State Recreation Area. It is nestled into some rocks just about a mile south of the more heavily trafficked and renowned stretch of Hapuna Beach (capped with Mauna Kea Beach area to the immediate north of that).

A teeny tiny fish in a teeny tiny calm tide pool at Mile Marker 69 Beach. That was about the only “snorkeling” one could do on this day at this location. We learned real fast that winter is not the season for snorkeling Mile Marker 69.

I had no idea that the name of this spot was known as Mile Marker 69 until this recent trip. I’ve since corrected my previous blog post about Hapuna State Beach Park to reflect this. My bad, and thanks locals! If you go to my previous post, you can see that the waters were much calmer in the spring given we were able to swim out about 1/2-mile and snorkel in the calm waters.

Winter swell is alive and kickin’ out at Mile Marker 69 Beach. Wow!

T screaming at the winter swell at Mile Marker 69 Beach. 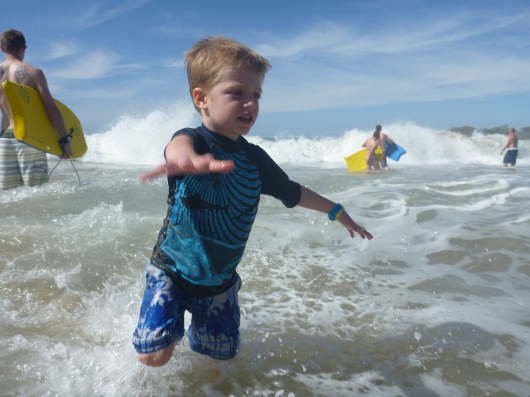 T “surfing” the winter swell. Surf was definitely up!

Well, it appears they don’t call it winter swell for nothing. The waves on this visit to Mile Marker 69 were frequent and at times, monstrous. Swell sets averaged about 4 ft. with occasional 7-footers. No kidding. And it was on this visit that T dove under his first ocean wave, and then within seconds of that his second. After that, C brought him back to shore. Thank god, because seriously, while these were some fantastic waves, they definitely were not for us haole (especially haole keiki). 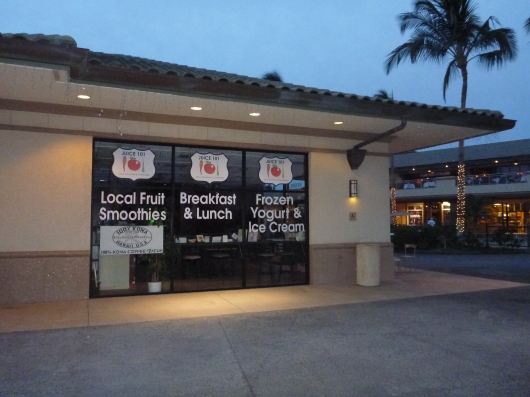 Juice 101 (or Juice Bar 101?) at the Shops at Mauna Lani (Big Island, HI). This was taken at night after our original visit because I forgot to get one in the daytime. It’s on the east side of the mall and this is the side visible from the parking lot by the Foodland market.

T and strawberry Tropical Dreams Ice Cream at Juice 101 in the Shops at Mauna Lani. 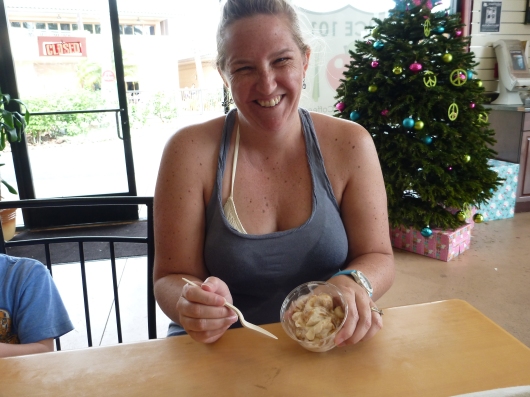 That Tropical Dreams ice cream is so damn good we went back the next day. They were out of macadamia nut, but the gal behind the counter whipped up a mix-in of mac nuts and mac nut butter into their vanilla bean ice cream. I KNOW, I didn’t know mac nut butter existed either! I also had the coconut the day before; it was beyond amazing. 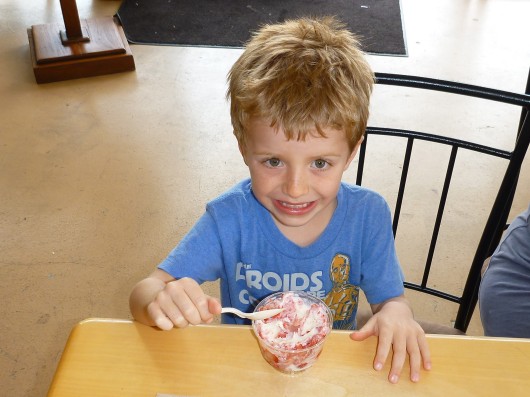 On Day 2 of our Tropical Dreams ice cream tour at Juice 101, T had strawberry again. Only it wasn’t the regular strawberry flavor because he’d finished that off in his previous day’s visit! The same lovely gal who handmade my mac nut ice cream hand-mixed him fresh strawberries into vanilla bean. SO GOOD.

After our totally tubular outing at the beach, we headed down to a nearby shopping area for some ice cream. We stumbled upon Juice 101 at The Shops at Mauna Lani, which happened to also serve ice cream. Tropical Dreams ice cream. RMT’ers, if you’ve tried had Tropical Dreams, find it. It’s rare to come by on the Mainland, but after a few google searches I see that there might be a parlor in Salt Lake City (UT) and in Granite Bay, CA. Trust me when I tell you that if I am ever in or remotely near either of those areas anytime in the future I’m going Aloha with my ice cream no matter how out-of-the-way the trek might be. 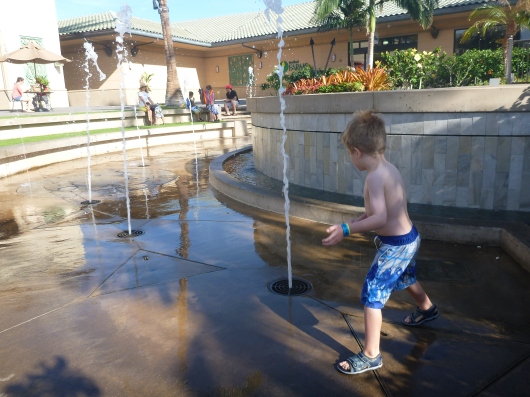 The Shops at Mauna Lani also has an awesome little pop-jet fountain out in the courtyard in front of Juice 101. It was a perfect spot for T to run as we waited for our food.

I’d say we got 2013 to a pretty tasty start… both in the form of waves and ice cream.