It was pretty warm here last weekend, and that inspired me to start messing around with my ice pop molds for the first time this summer! 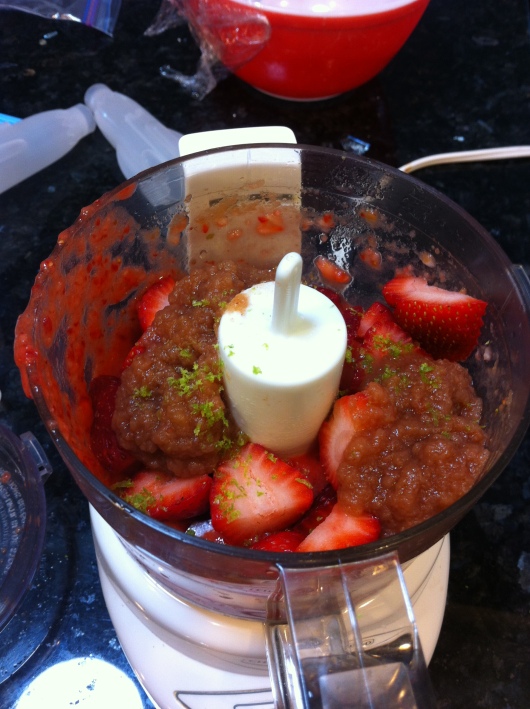 Strawberries, apple sauce, and lime zest can blend up for a zippy-but-sweet ice pop treat!

The strawberry puree I made for my ice pops. Notice it’s not overly liquefied but retains some berry chunks here and there throughout

T loved the strawberry-lime ice pops I made. I froze some in these push-up style molds that we got from one of his school fundraisers.

First, I just wanted to create a simple strawberry ice pop with some ingredients I had on hand. I took some chopped strawberries, homemade applesauce from our friends (as my “additional liquid”), and some lime zest. I blended all of that up until it became a slushy but not completely smooth consistency in my mini-chopper. I poured that mixture into my molds and froze them for a good two-to-four hours until solid. This method created what tasted like a strawberry margarita ice pop, meaning a wee too much lime zest, but T still loved them (thank goodness). 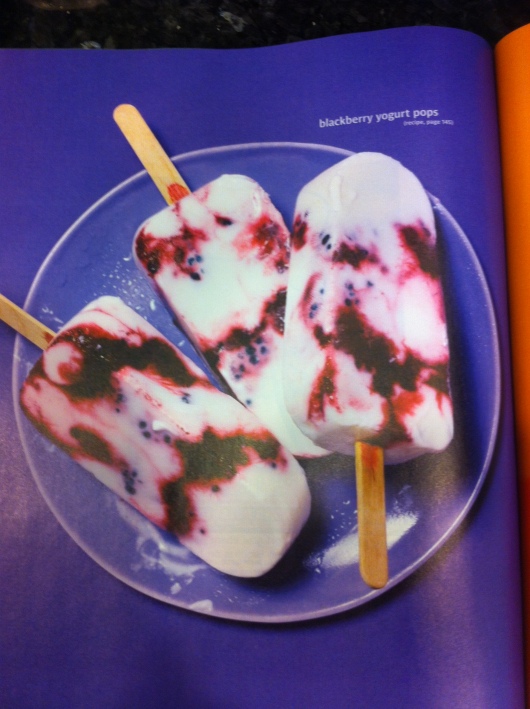 The “inspiration photo” from my recent issue of Real Simple magazine (July 2013). I didn’t use the recipe as it had a lot of added sugar (which I didn’t want).

Getting ready for Round 2 of my summertime ice pop adventures: Enter Greek yogurt.

My blueberry mixture, which consisted of only the berries and homemade applesauce. 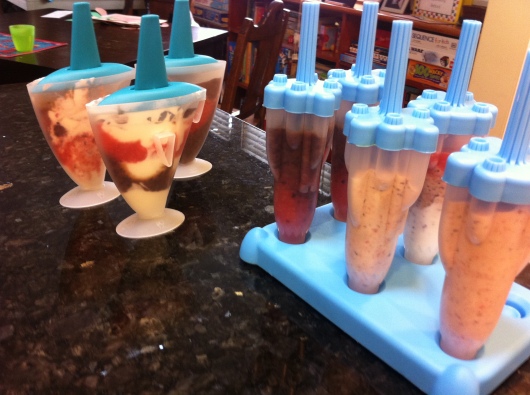 The pops pre-freezer. I tried variations of the red-white-and-blue motif: Layers, swirls, and completely blended.

From there, I became inspired to try my hand at a red-white-and-blue frozen treat of some sort, again from ingredients I could find in my refrigerator and pantry. I can’t really call these ice pops because I was going to play around with Greek yogurt, too. I got the idea from my recent issue of Real Simple magazine. It’s a pretty picture, isn’t it? While I didn’t have any blackberries, I did have blueberries and strawberries, thus the holiday-inspired idea. I thought it couldn’t be too hard to sweeten the Greek yogurt with a little honey (but not too much as to discolor it from its original white) and layer it with strawberry and blueberry purees (made in the same manner as above, minus the lime zest). 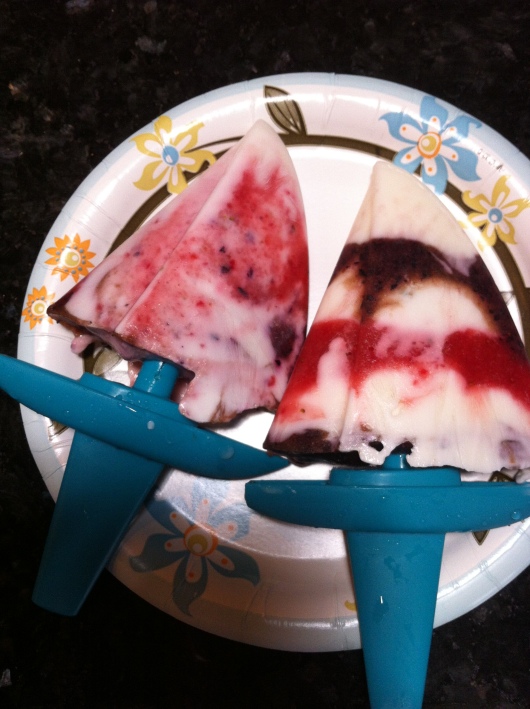 A couple of the finished red-white-and-blue Greek yogurt and berry ice pops. We all agreed that they looked MUCH better than they tasted.

OK, maybe it is harder than it sounds. How shall I put this… when T tasted these pops, he promptly asked what the white stuff was. When C told him it was yogurt and added, “You know, like Yogurtland!” T’s response was, “Yeah, like Yogurtland… if a bad guy broke in and put bad yogurt in all the machines!” So, yeah, they looked alright but tasted, um, bitter and chalky. I guess I need to experiment a little more with the Greek yogurt to get the sweetness up but without loads of sugar and without compromising the whiteness of the yogurt either. Any ideas, RMT’ers? 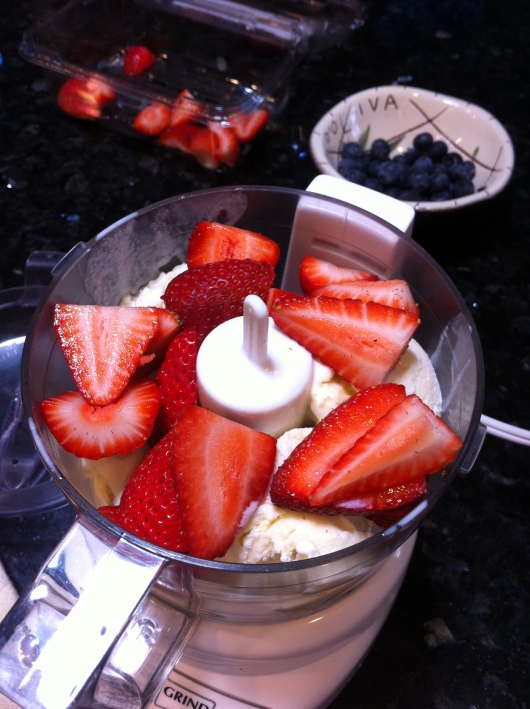 This is about 3-to-4 scoops of ice cream and about 4-to-6 large strawberries in my mini-chopper.

I blended the strawberry and vanilla ice cream mixture to a smooth puree, but you could also go with a chunkier consistency by “chopping” the ice cream alone first for 15-to-30 seconds then adding the berries for another 15-to-30 seconds. It is important to get the ice cream to almost a liquefied texture though for better pouring into your ice pop molds. You could also rough-chop some of the berries into smaller chunks and drop those into your filled molds also and/or add halved or quartered blueberries to the strawberry mixture for even more interesting and festive pops. The combinations are endless really!

My third and final attempt wound up being the easiest and most successful: Take your favorite vanilla ice cream, blend it with berries, pour into ice pop molds (or paper cups, tart molds, mini-muffin tins… really whatever you have on hand can work here as long as you have plastic wrap to seal the top and secure a stick in the center), and freeze until ready to eat. I chose strawberries as I needed a win for T’s sake (he loves strawberry ice cream and frozen yogurt, which was why I had tried the Greek yogurt in the first place!). I also must emphasize that I threw out all my original ideas about keeping these treats lower in sugar and calories (what the hey, it’s for the 4th of July, right?!), so bye-bye to the Greek yogurt for now anyway.

Sail away this 4th of July with an endless fleet of homemade ice pop treats! 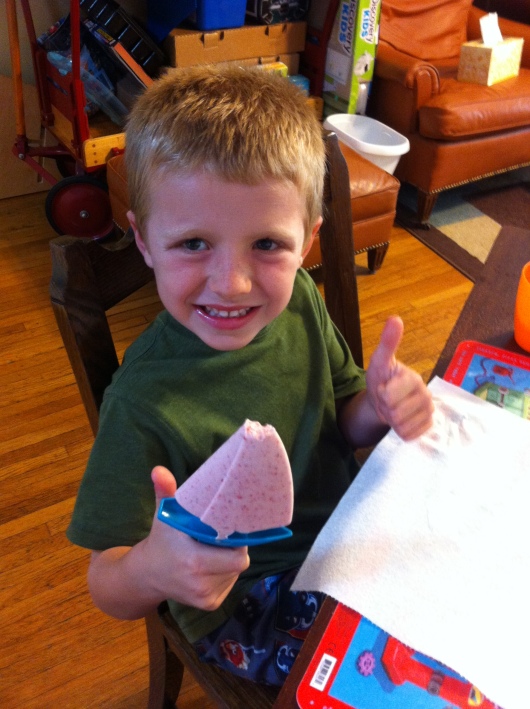 Well, I am happy to report that the ice cream berry pops were a sweet victory all-around! They were extremely effortless all while looking and tasting great! Initially I was worried that the ice cream might not freeze up solid like a traditional ice pop after being liquefied, but I think the mixture had just enough water from the berries for it to freeze and crystallize properly into molded pops. They didn’t melt super-fast either (another concern). Next time I am going to try pureeing blueberries or blackberries into the ice cream and layer and/or swirl that with plain vanilla and the strawberry mixture for a true blue (and red and white) tribute to the 4th… I’ll post a photo when I do! I just happened to run out of ice cream and berries last weekend (oops!). 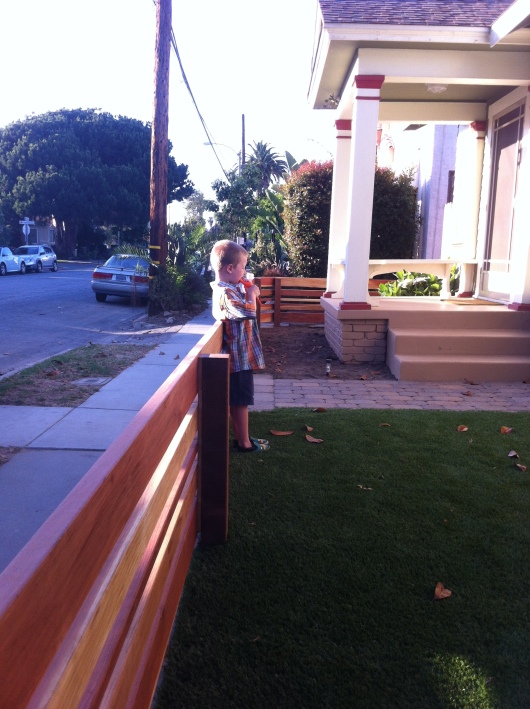