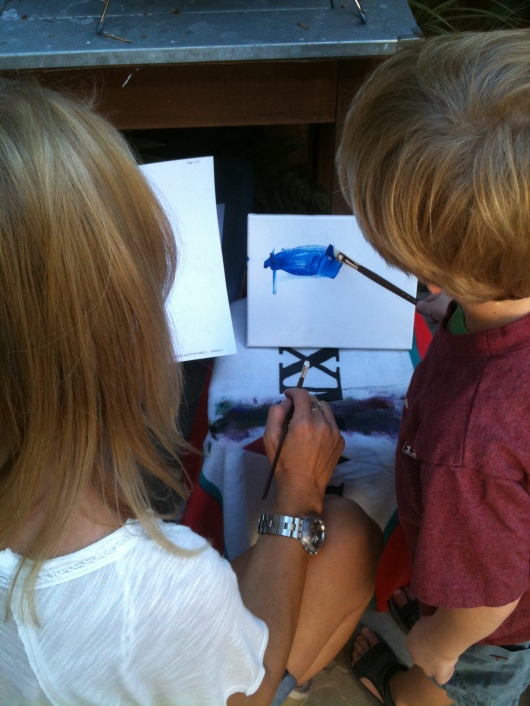 My dear friend A guides T during one of his art pieces.

Last Friday our friends A and S were kind enough to host us for an art-focused play date at their home. Full disclosure: my friend A was an art student in college and even took some youth-centered coursework, so she has a leg up on me when it comes to all this stuff. But it doesn’t mean I can’t learn a few things, so I took mental notes then entire time. I am just thankful she was willing to host and help us out.

See, this play date was a big deal and I needed some help because, well, um, I’m not really that great at organizing art projects here at home for T. There, I said it, though it’s kind-of sad and shameful to admit that given that I am home with T full-time. I guess you might think I’d be an old pro at that aspect of stay-at-home-parenting after four years, but I’m just not. I’m not good with being OK with the mess that art can make of my house, and I certainly am not OK with the time it takes to clean up after a messy art project, especially paint. However, after seeing what A was able to do in an hour-long play date where she just let the kids be kids and be free to express themselves whatever the mess made… yeah, it’s official: I need to stop being so uptight about this art thing and get over myself for T’s sake (and my own). 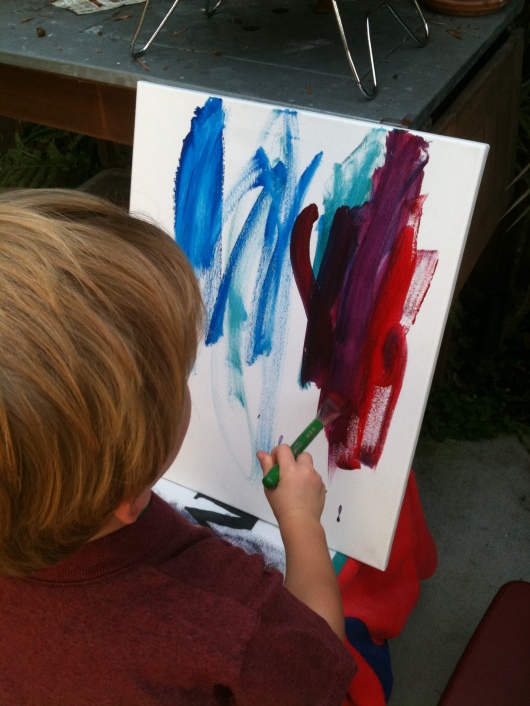 T starts the bigger of the two canvases (this is a 16"x20" size) at his art play date. The color on the far right is the newly discovered (to us) deep pink color made by mixing red and purple tempera paints.

One way A made this art play date super-special was that she purchased blank canvases for the kids. I immediately put these on my shopping list and now am the proud owner of a variety of canvases for future works. T was so into painting on the canvas (versus just plain old paper) that it really did kick it up a notch in the holding-his-interest department.Starting at just around $5 one can find all-media, blank, white canvases in two-packs at Aaron Brothers ($8 for the 11″x14″ size I got), and with a coupon it’s even that much more of a deal. But really, after seeing what happiness $8 can buy me, I wouldn’t have cried if I forgot my coupons. And don’t worry because even if you do forget,  Aaron Brothers is really good at hooking you up on the spot if you are coupon-less; I got a 50 percent off of one item on this particular shop, and with my purchase I received a special “store bucks” coupon of spend $25 get $10 back if I shop between November 4-17, 2011, so now I can return and stock up even more for way less! 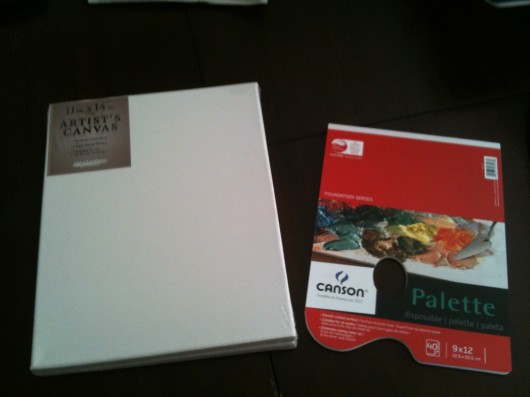 For just around $15 (or half that amount with coupons), a two-pack of 11"x14" canvas and a tablet of disposable palette paper makes your next art project or play date that much more special.

The kids also painted upright in easel position versus flat on tables. The kids got to choose how they wanted to work, and both chose upright. While I don’t have an easel for T here (and A didn’t have an extra for him at her house either), I do have a spot on the fence in the backyard where I can set a canvas upright at his height. Perfect solution! 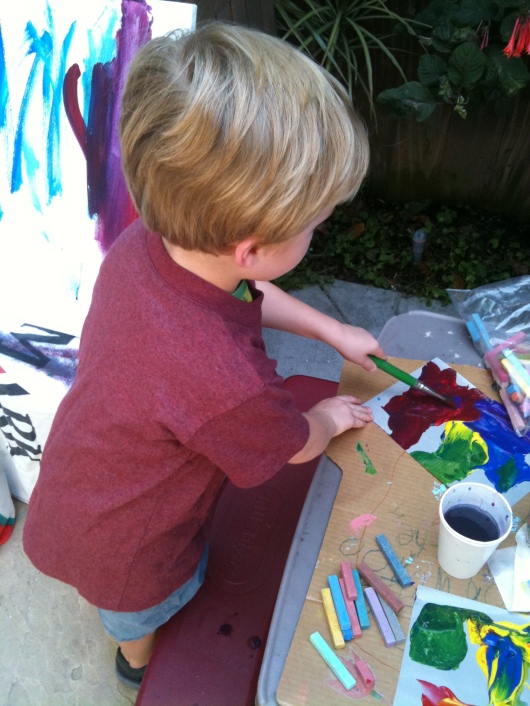 T mixing up paint on some palette paper during an art play date.

A also had this special palette paper for the kids to mix their paints. This disposable paper is a slick surface (versus a regular paper plate) that really allows the kids to blend the colors together easily, which really was a big part of this whole process given that they only had the three primary colors (red, blue, yellow), purple, brown, and black as their starter colors. At one point T said, “I wonder what red and purple makes,” to which his friend S replied, “Probably brown.” However, it created this really deep pink color, which made a lot of sense as it’s really like mixing red with red and blue. S was pretty impressed also that T had made pink without using white, so she even learned something for later, too. 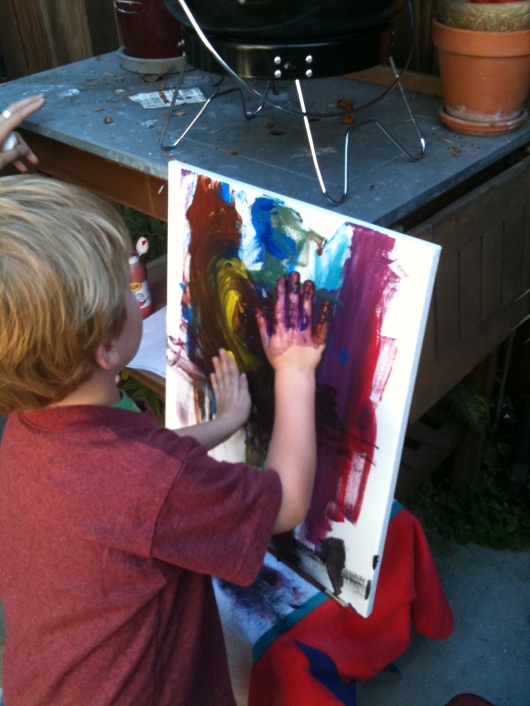 T puts down the brushes and gets his hands (and arms) right into the heart of his artwork.

Then there were the brushes. There were fat brushes, thin brushes, ones with long handles, and some with short handles; there were new and old brushes, and ones with rough bristles and others with smooth ones. Again A allowed the kids to choose from a wide variety of brushes to see what they liked best. But even better yet, why not just use hands as brushes? Though this was starting to make me shudder (the mess!), again A talked me down and just said to let them go at it and see what they could do. 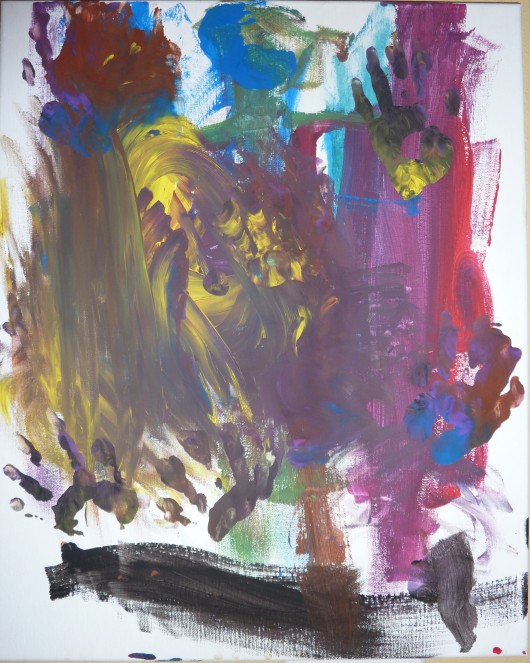 And wow, what they could do… it was pretty incredible really, and honestly really fun for them, and for us moms, too. Maybe I had fun because I didn’t have the mess or the kids to clean up afterwards (part of the deal was A said not to worry about helping her with any of that once we finished, which was far too kind). But better yet, I’m pretty sure I had fun because T had fun. He was happy and so proud of what he made, so how could I not continue to encourage this? In fact, one of the paintings is so cute that we are going to go frame shopping this weekend so we can give it a proper place in our home permanently. 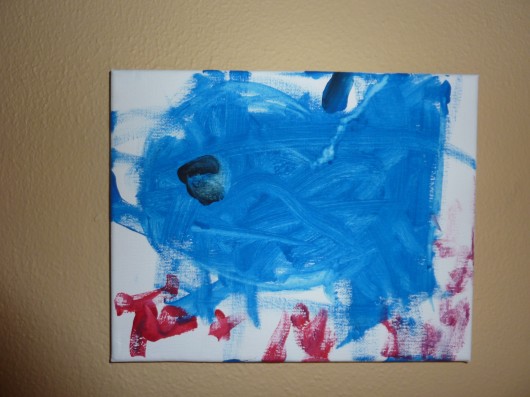 So I can now proudly say (and with blank canvas in hand) that the next time T asks to get out the paint (which we have tons of by the way, along with brushes… yeah, I know, sad), I will not complain about the mess and I am not going to talk him into doing something else. I’m just going to put on some old clothes, throw an old T-shirt over T, grab the art stuff, and head outside. We won’t have any expectations other than knowing it will be fun and we’ll make a mess, and that’s OK. I do own a hose, lots of old rags, and soap. Life might be messy sometimes, but it usually cleans up just fine – it’s all good (even the messes).

(Big thanks again to my art play date friends A and S for all their hospitality, inspiration, and support!)