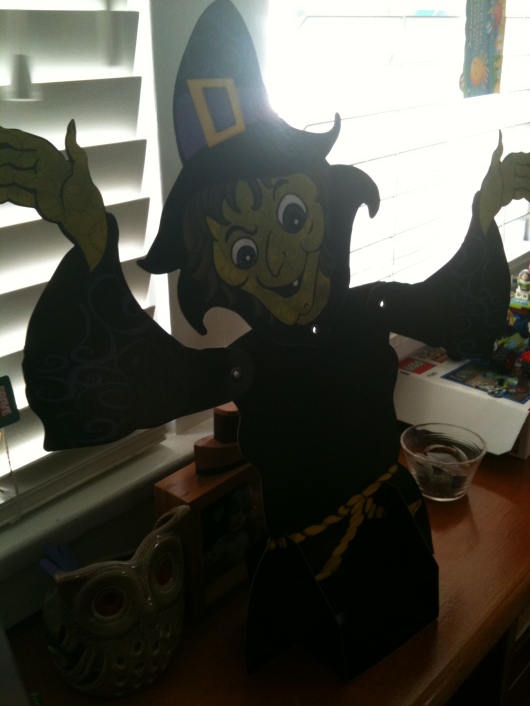 As far as witches go, she's not too scary - and works nicely with my already-existing owl (left).

Halloween… it’s coming, RMT’ers, and it’s coming up FAST. And with T’s birthday this month, too, I usually don’t get around to acknowledging this holiday until mid-month as was the case again this year. Nothing like once again being late to the party… or are we? I don’t really think so because there’s only so much excitement I have to drum up for these holidays considering a four-year-old is pretty good at getting and staying excited about holidays not just at the time of year they occur but pretty much all year long. After all, this is a household that gets to hear Jingle Bells sung out loud year-round. 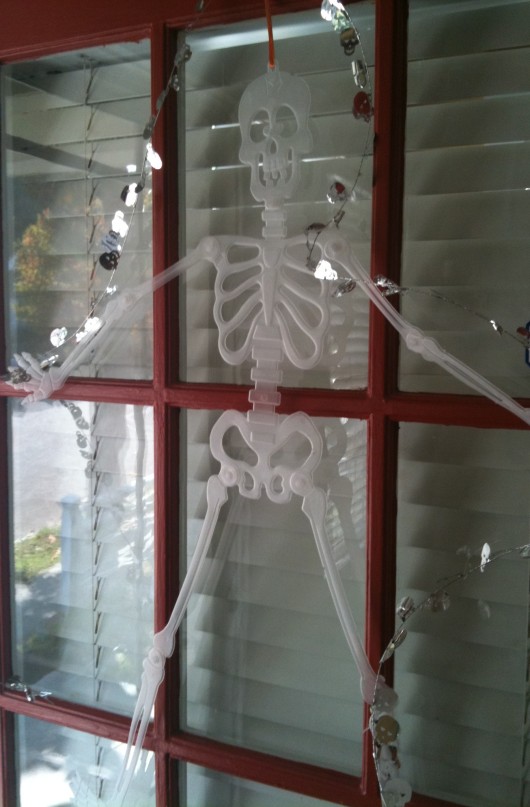 Welcome to our spook-tacular home!

But no time like the present to get into the spirit of the scare, right? So Monday I took T to Dollar Tree to pick out about $10 worth of decorations, which in this store meant close to 10 things. With that budget we walked out with: two 25’ strands of foil garland (silver skull and purple bat); one 5’ Dracula-looking wall/ door decoration; one pumpkin “mask” kit (pirate); one table-top witch; one plastic glow-in-the-dark skeleton door-hanger; one inflatable pumpkin beach-style ball; one treat bucket; and one LED miniature lantern. Once we got home, I left T with Grandma to take a shower and came back 20 minutes later to a house (well living room anyway) pretty well decorated – or at least as decorated as it’ll be for this holiday (ha)! 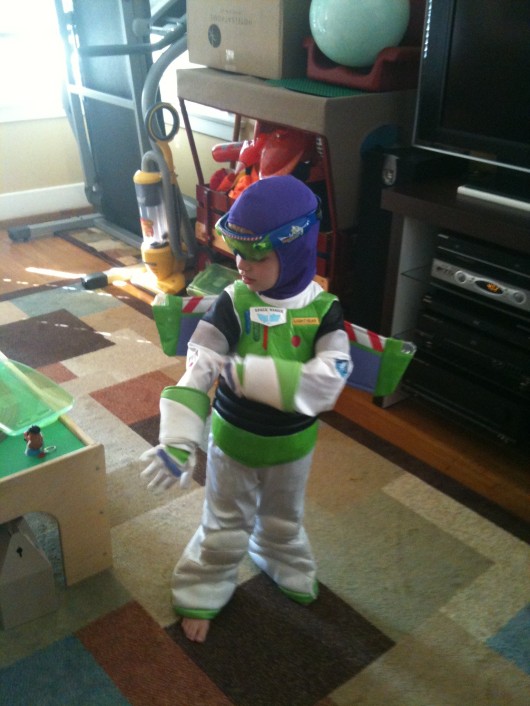 T checking himself out as Buzz Lightyear. Thanks again to friends A and L for the loaner! 🙂

Last week we were able to get T’s costume together also. He’s going to be Buzz Lightyear this year, which he’s been planning on for months so much so that I’d already picked up a pair of Buzz PJs over the summertime and put them away with grand ideas on how to fashion them into a working costume. I was going to throw a white, long-sleeved top under the PJs and doctor up the sleeves with different color electrical and masking tapes, and then have T wear his light-up Buzz glasses from Disney on Ice last January and his dress-up plastic talking Buzz wings. Voila, Buzz… right?! Hmm, maybe not, because as a friend kindly listened to my half-brained ideas, she responded by offering up her son’s authentic Buzz costume for T to borrow for the big day. I’m not sure if she did this because she honestly is a wonderfully helpful and nice person (because she is), and/or if she did it because she listened to my half-brained mom idea and thought it was overly ambitious. I say that last part because though I do believe I had good intentions, looking back I now admit that my idea was a little half-brained (assed?) and a tad sketchy. At any rate, she saved me from myself (whew!), and we are thankful for the loaner costume; if you’re reading this, my costume-lending friend, it’s under good care until the big day, I promise! 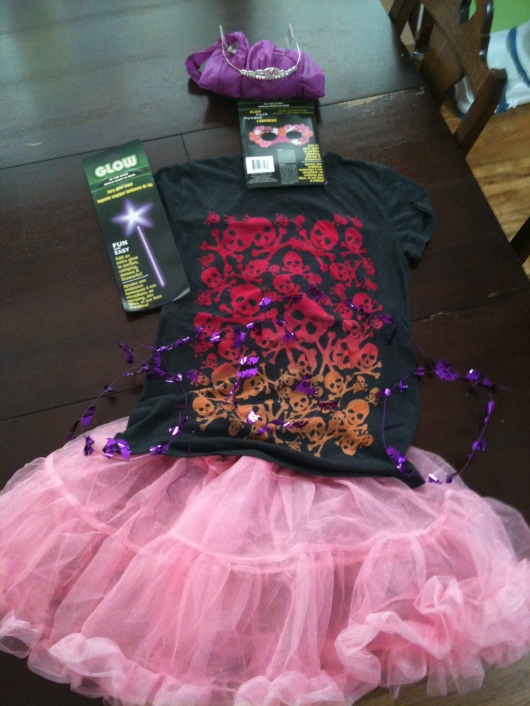 Paired with tall, flat, black boots, this will be my Halloween costume. Scary, no?

As for my costume… yeah, I think I’ll let the photo speak for itself. But the background here is that T asked me to be a Princess, and while I immediately obliged, I knew full-well I’d be doing Princess my way and certainly not mainstream. I got my outfit finished up this week and tried it on for T. Once he saw me in the outfit, he said, “Oh wow, you’re a BAD Princess!” Yes, yes I am… and as another good friend said when I told her this story, “Is there any other kind of Princess really?!” BOO-yay! 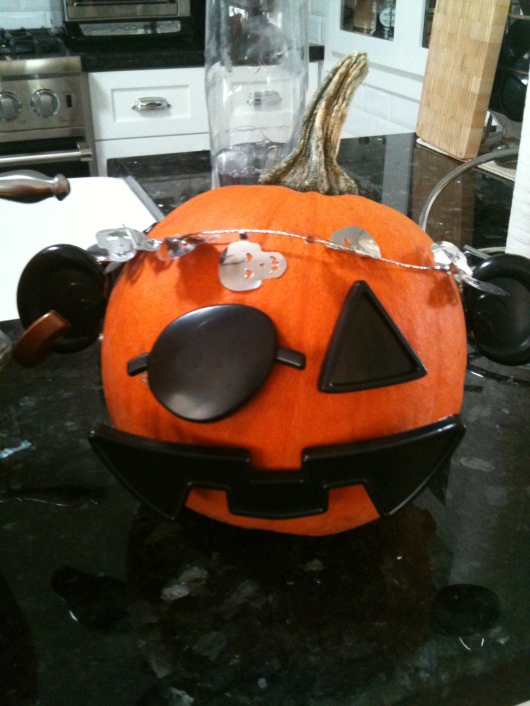 We still have a variety of Halloween outings and festivals to attend in the coming days, or at least that’s our intention. T’s school already had its annual field trip to the pumpkin patch, so from that we already have a few pumpkins here jazzing up the joint… but a few more certainly wouldn’t hurt. I also hope to whip up some spook-tacular treats in the next week for the parties we have on the calendar… what to make, what to make… so many “kooky” ideas!

Have a great weekend Halloween-ing around!