Lowe's Build and Grow kits are perfect for the little (and big) builders in your family. These blueprints and story cards come with each kit; our latest project was a school bus.

A year or so ago, I was going through some of the toys I had put away from various random giftings or holidays and T birthdays past because – and please, let’s all be honest, RMT’ers – these kids have way more than they will ever need at the time they receive gifts. That and occasionally, T winds up getting presents that aren’t completely age-appropriate at the time he receives them. 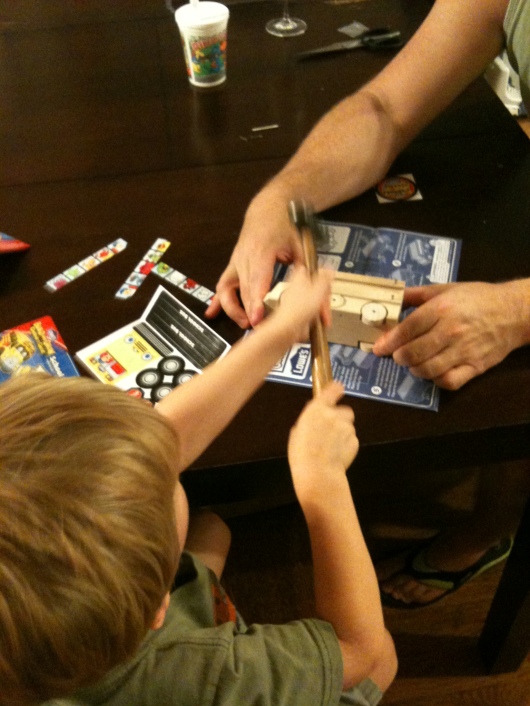 This was the clearest shot I could manage of T actively hammering nails with Dad during their craft time together.

T received three of these kits either at his third birthday or in his Christmas haul last year, maybe even earlier than that, so at the time he just wasn’t ready for a five-and-up present (which these are marked), especially one that came with nails – yes, real nails! But as months went by and the holidays became a more distant memory, I found myself in his put-away toy storage and rediscovered these kits. I read up on what they entailed – lots of hammering pretty much, along with sticker finish-up – and now that T was older and had some experience helping Dad out on various fix-it projects, they appeared to be perfect Daddy-and-T projects. 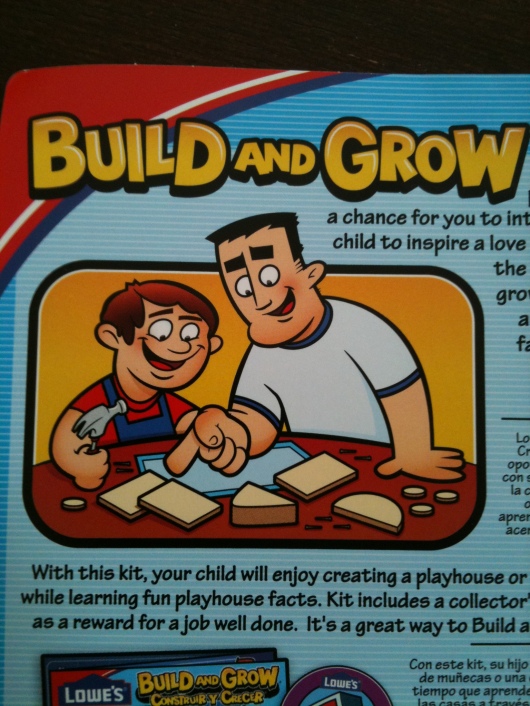 The "daddy and a boy" photo on the Lowe's Build and Grow packaging.

I got the kits out one-by-one over time, and each time I did it gave T and his dad a great 20-30 minute activity together. In fact, before I even said anything, he saw a photo of a man and a kid on the packaging and said, “Look, this for a daddy and a boy!” And sure, a mom and a girl could do the kit together, and I’m all for that, and to Lowe’s credit, their packaging does show both girls and boys doing the kits, and we have a friend who takes his daughter to these fairly often, so Lowe’s  definitely is all for that, too.

So three kits, one in-store free Saturday workshop with Dad (with free kit, apron, and goggle included), and one additional kit later, T still loves these things. They sell for anywhere from $4-8 at Lowe’s. Just ask staff where the Build and Grow kits are, and usually they can lead you to one of the many kiosks throughout the store. We’ve found them all over the store, but for more selection, you also can get them online. 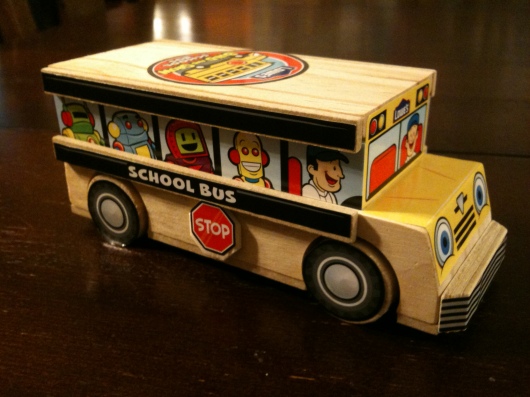 Have fun getting hammered this weekend, RMT’ers! And I mean that literally… as in, hammer, nails, and wood.