I’ve already professed my undying love for the Balboa Bar in this post. But trust me; no matter what you call these ice cream bars, they are delicious by any name. And now I’ve found them right here in Long Beach all thanks to Naples Rib Company!

Though the restaurant isn’t open weekdays for lunch, Naples Bars are available at Naples Rib Company’s take-out window all day long. Lucky us! 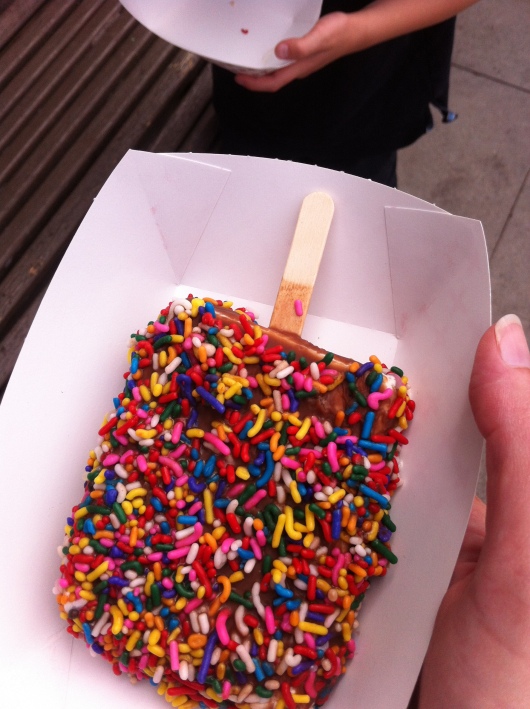 My first Naples Bar… and it won’t be my last!

They call it a “Naples Bar” but it’s the same thing as the Balboa Bar: A plain, vanilla ice cream bar dipped in chocolate then smothered in sprinkles and/or some other candy coating. It’s magically delicious. I don’t know if it’s because it’s so entirely classic or because the buyer has a say in how it’s made, but whatever it is, it’s summer on a stick… all year long.

T is so happy that he didn’t have to get a chocolate-coated Naples Bar.

Even without the chocolate coating, a Naples Bar is still quite delicious!

There is one hitch with these ice cream bars. See, T really doesn’t like chocolate much (IKnowRight?!) and that always becomes an issue when it comes to desserts. It took me some (OK a LOT) of convincing to go here and try these treats, so in our case it was good to learn that one can coat the Naples Bar with the toppings without it being robed in the chocolate.  I am so glad we resolved that problem for you, T.

T on a bench outside Naples Rib Company enjoying his Naples Bar. While not exactly the same as eating along the sidewalk on Balboa Island, we’re still on a bench on an island (yes, Naples is an island!) with an ice cream bar. Works for us! 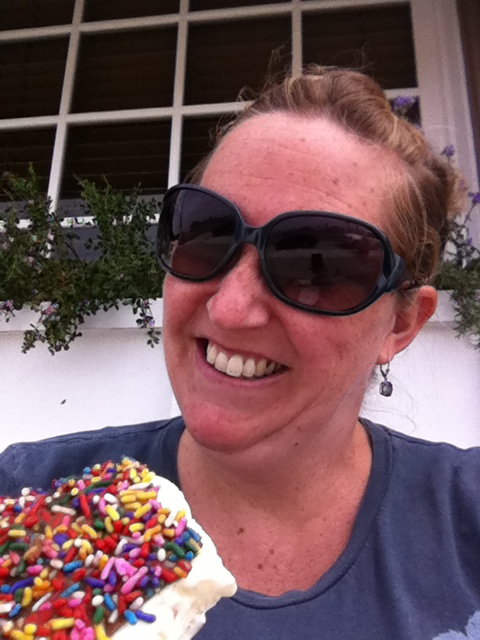 Let’s see, how can I say this in a “family” way. OK, I’ll replace one word as “tasty”: Call them whatever tasty thing you want, but I tasty love these tasty ice cream bars!

Now usually when we head to Balboa Island for the bars, we head over on the ferry to ride the Ferris wheel and play games on the Peninsula. While Long Beach doesn’t have a vehicle ferry (that I know of), it does have a boardwalk zone complete with a Ferris wheel, carousel, and nearby arcade with bowling alley. It’s just not right near where you can get the Naples Bars, but it’s close enough.

The Ferris wheel at The Pike at Rainbow Harbor in Long Beach (CA).

C and T on the Ferris wheel at The Pike at Long Beach. Yes, that’s the Queen Mary behind them. There are great views of the waterfront from that wheel, RMT’ers!

The view over Rainbow Harbor toward the Queen Mary from the Ferris wheel at The Pike at Long Beach.

The view toward Rancho Palos Verdes from the Ferris wheel at The Pike at Long Beach. The roller coaster is not an operational ride anymore but just an architectural decoration over one of the local bridges.

The Pike at Long Beach is a place that we’d always seen at a short distance from across the street at the Aquarium (sort of hard to miss that Ferris wheel!) yet we had never really visited its attractions until a few months ago. That’s mostly because the hours of operation are quite limited outside of summertime. But it’s summer now and the Pike is open for full-time business, which is great news for T as he’s been dying to get back on that wheel (and so have I!). 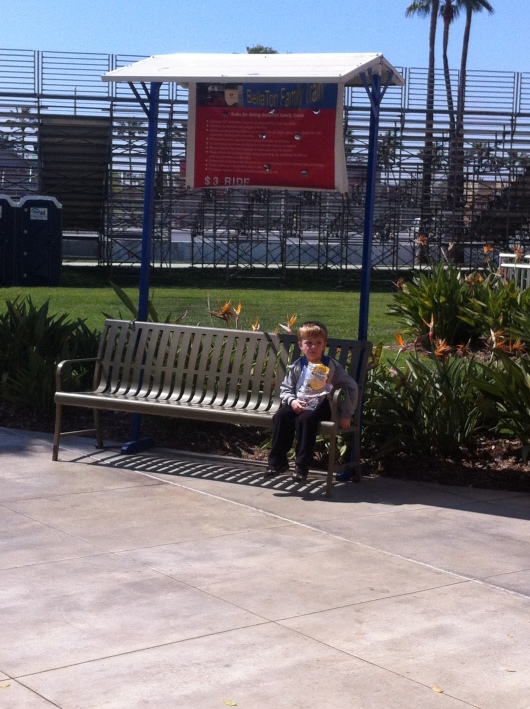 Sorry, T, but that train isn’t a-comin’… we’ll go back this summer though for a ride, I promise! 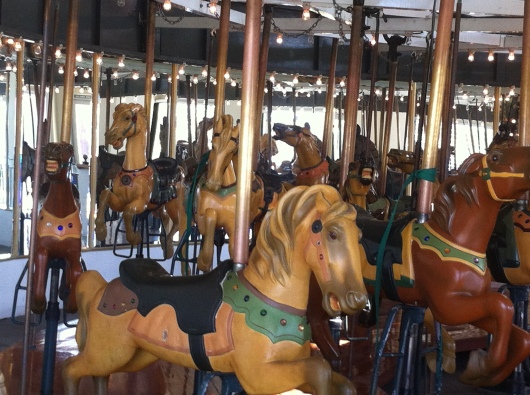 The carousel at The Pike at Long Beach (CA).

I figure after our next Naples Bar outing, T and I can drive 10 minutes up Ocean Boulevard from Naples Rib Company into to downtown Long Beach to the Pike for games and rides. No, it’s not exactly the same as an outing to Balboa Island and Peninsula, but it’s so much closer (10 minutes from home versus 45), less congested and crowded (have YOU ever tried to find parking on the Island in the summertime?! yikes), and way cheaper (just the savings on gas alone – !). Anyone care to take a summery spin around town with us?

RMT’ers, what day-trip have you partially or fully recreated right in your own city or neighborhood for your own kids?