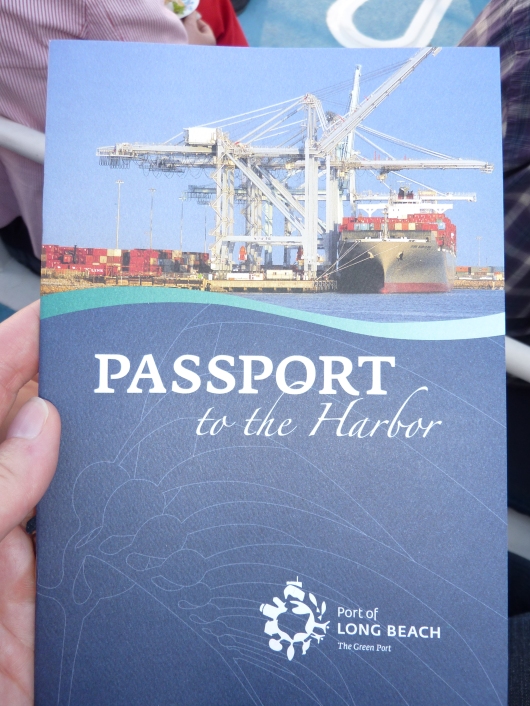 Extra! Extra! Read all about… a FREE tour of the Port of Long Beach (CA)!

A new, fun, and FREE activity that our family learned about this summer thanks to our neighbor and our local neighborhood association is the Port of Long Beach’s FREE port tour program! 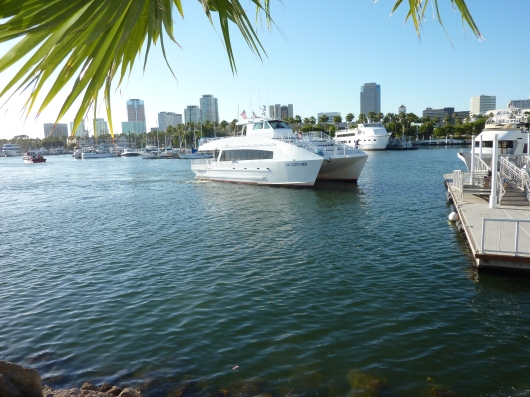 The catamaran Christopher heading to dock for our tour of the Port of Long Beach (CA).

T reads the brochure we received on our tour of the Port of Long Beach (CA).

Let me just say this, RMT’ers: Even if you are not a resident of Long Beach (CA), if you have a chance to take a free tour of the second largest port in the United States (only to Los Angeles) – and part of the eighth largest seaport in the world (when combined with Los Angeles) – please do it! It’s as educational as it is a breezy boat ride!

Co-host for the evening and Port Commissioner Nick Sramek talks to the crowd before undocking for our tour of the Port of Long Beach (this is at Pier 9 in front of Parker’s Lighthouse restaurant in Rainbow Harbor).

On the water during our tour of the Port of Long Beach (CA), we saw ships queued up ready for docking once berth space became available.

WOW, and what a lovely Thursday evening out on the water it was! The weather could not have been better, but even better than that, the Port of Long Beach’s Community Relations Department put on a fantastic and informative 90-minute program. Board of Harbor Commission Secretary Nick Sramek and Community Relations Manager John Pope guided our group through the various components that make up the Port of Long Beach, from container cargo management to bulk shipping operations. We got to see a 6000+-container ship being unloaded for train and truck land transport, and we got a close-up view of just one of the many metal scrap yards piled high awaiting loading onto boats headed out of port. We learned about the ships that leave the Port to launch a variety of satellites down by the Equator, and we heard stories of once-busier berths from earlier in the days of the 101-year-old Port.

Tugboats – and their captains and crews – have very important jobs to do down at the Port of Long Beach (CA). 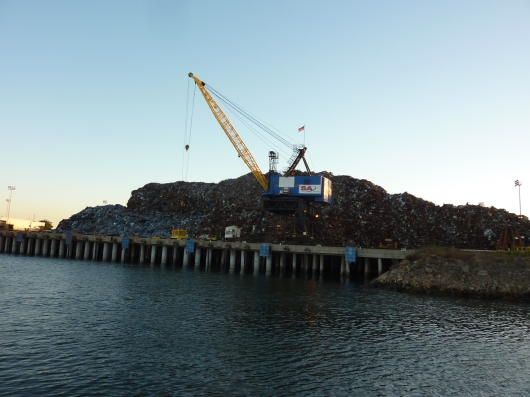 A pile of scrap metal awaits loading for export down at the Port of Long Beach (CA).

The ships at the Port of Long Beach are, um, fairly large. But that’s what it takes to be part of the second busiest port in America! 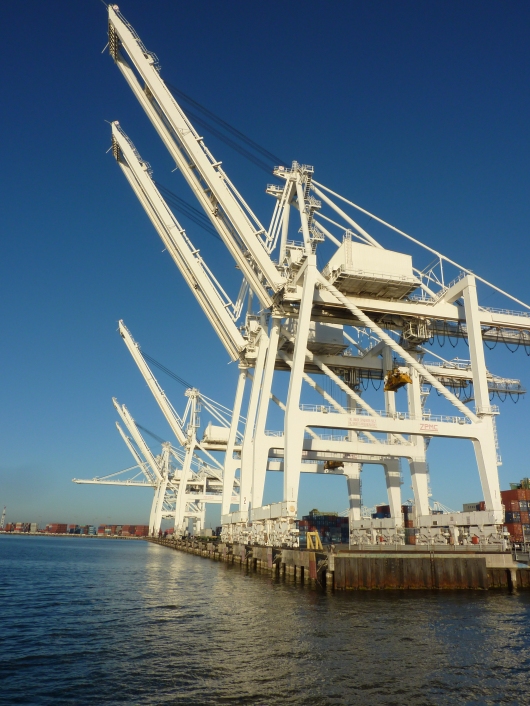 Oh, and the cranes at the Port of Long Beach are fairly humongous as well! But that’s what it takes to unload those big container ships!

A big bulk shipping vessel hanging out in the Port of Long Beach.

RMT’ers, I never appreciated the enormity of the cargo ships, cranes, and other mechanics that comprise a port operation before taking this tour. Also, going on this tour made me realize first-hand just how much STUFF we Americans guzzle, from gas to groceries; it takes a lot of sea containers to be part of the top-eight ports worldwide after all! It also requires a lot of labor; despite the automation of the ports worldwide in recent years, the Port of Long Beach is still one of the area’s largest employers, boasting one in eight jobs in Long Beach’s local economy at 30,000 direct employment positions in port proper. 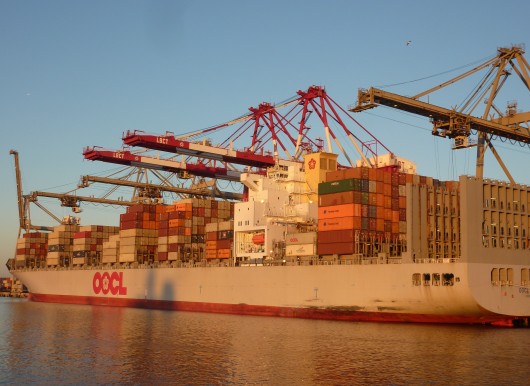 This cargo ship was in the process of being unloaded for ground transport, so our Port tour steered over for a closer look.

A closer view of a few of the cranes working to unload this cargo container ship in the Port of Long Beach. We got an up-close and personal tour from the water of the Port’s operations, and we saw views you’d never even be able to get from the docks on land. Very nice!

One of the cranes down at the Port of Long Beach lifting a sea container off-ship to ready it for trucking (or train) transport.

There are several under-built berth and pier areas within the Port of Long Beach slated for upgrades or other uses over the next decade. I don’t know if this is one of those specific areas or not; I just took this because I thought it was a cool art deco relic of a building tucked in between other more modernized berths.

However, what’s not being guzzled as much as it once was down at the port are fossil fuels while boats and trucks sit idle in port awaiting loading and unloading. The Port of Long Beach is and should be extremely proud of their realized 72 percent reduction in emissions over the last five years thanks to several green transportation initiatives, such as the Clean Trucks Program and the Green Port Policy. The Port of Long Beach also has approximately $4.5 billion invested over the next 10 years to continue their positive progress towards an even cleaner, more efficient, and further modernized port. Projects include the updating and widening of the Gerald Desmond Bridge and adding more “green” berths to the port on now-vacant lots the port already owns (click here for more information on specific projects). 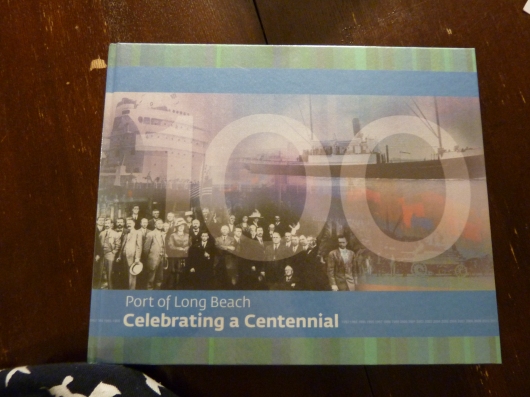 For answering correctly in the trivia contest (I guessed that the Green Port Programs began in 2005), I won this lovely book, which is chock full of Port of Long Beach highlights and beautiful photography. The book was published to celebrate the Port’s centennial last year.

Along with a great tour, Port staff treated guests to even more freebies, including a light dinner on-board and a trivia contest that wrapped up the tour complete with – what else –port-branded books, hats, and other paraphernalia (go here for more fast and fun facts about the Port of Long Beach).

The sunset was a lovely bonus during our tour of the Port of Long Beach (CA). What a gorgeous evening!

C, T, and I enjoyed our tour of the Port of Long Beach so much that we’ll do it again sometime next summer! (Gerald Desmond Bridge is behind us.)

Thanks again to the Port of Long Beach for their hospitality and one heck of an educational evening out on the water! Our family is proud of our Port and we plan to make this a new summer family tradition! If you want to sign up for a tour of your own, visit the Port of Long Beach’s website on the first Monday of each month at 8am for the newly released list of the following month’s tour schedule (for example, the September 2012 cruises will be posted and reservations made available at 8am on August 6, 2012 – that’s THIS COMING MONDAY RMT’ers!). Also be forewarned that tours fill up fast; we learned that once sign-ups open, all of the spots can fill within 15 minutes, so as the Port likes to say, set your alarms for that designated Monday morning so you don’t miss the boat!