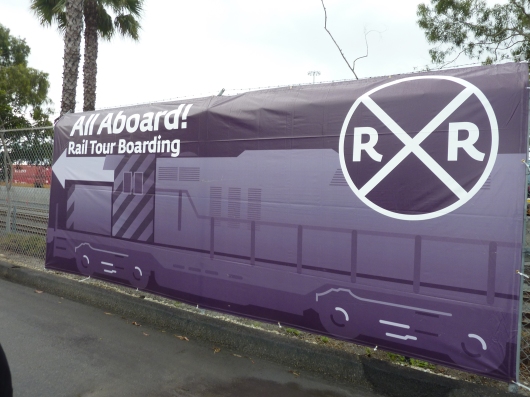 A couple of weekends ago we had the pleasure of taking a complimentary rail tour of the Port of Long Beach. We took a free tour of the Port by boat last summer, so when I learned they were offering free train tours for a limited time, well, of course I jumped at the call to sign us all up (as in, signed up within minutes of seeing the notice posted on the Port’s Facebook page). 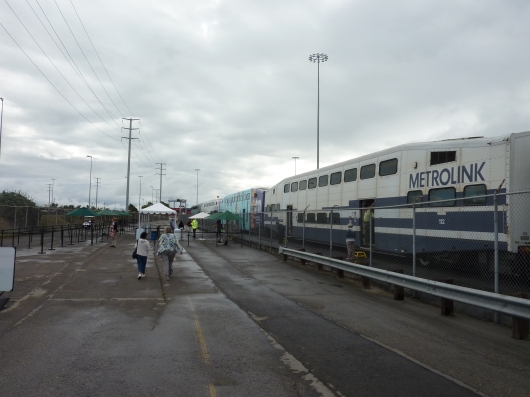 On approach to our Metrolink train down at the Port of Long Beach. The Port offered a weekend of free tours of their rail operations, which was fun and educational for kids and adults alike! 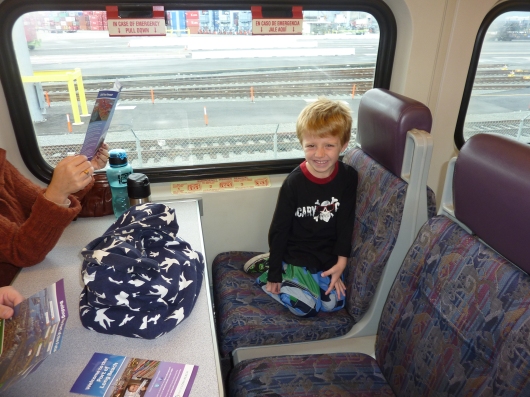 T is as happy as can be riding the rails down at the Port of Long Beach! 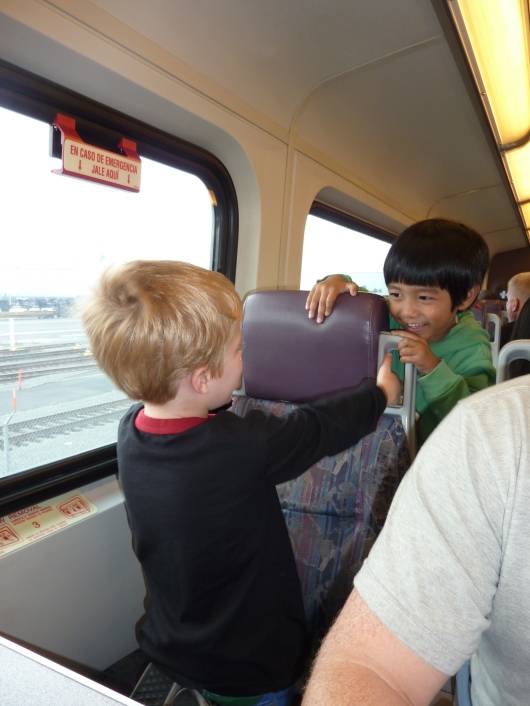 The kids had a blast on the free train tour of the Port of Long Beach. 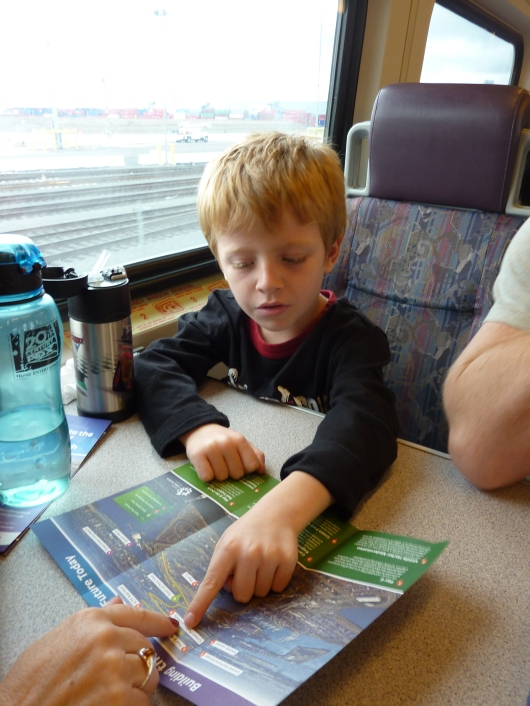 T learning about the Port of Long Beach during our free train tour in October. 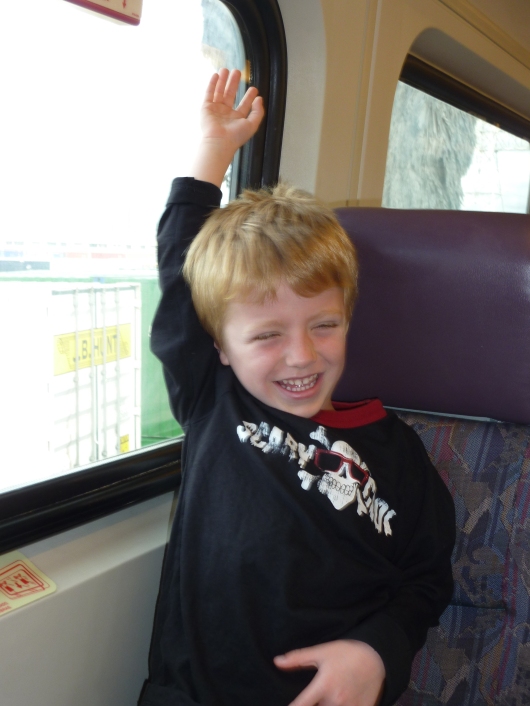 “I know, I know!” T wants to win a prize during one of the several quiz rounds during our train tour of the Port of Long Beach. 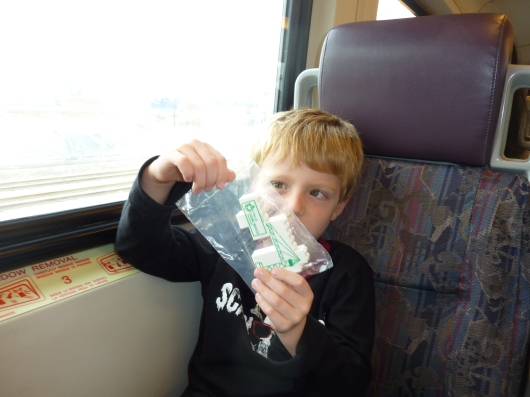 T was in luck prize-wise! The Port of Long Beach had these LEGO-like building bricks for all the kids during the train tours. Wow, a free train ride AND free building bricks?! Thanks!

T loves trains (as regular readers already know), and he loved that boat tour of the port, too, so this was a no-brainer decision. I also encouraged our neighbor and T’s Auntie to sign up with us, too; it was my way of thanking her for getting us involved in these free Port tours to begin with since she was the one who’d told us about the boat tour in the first place! 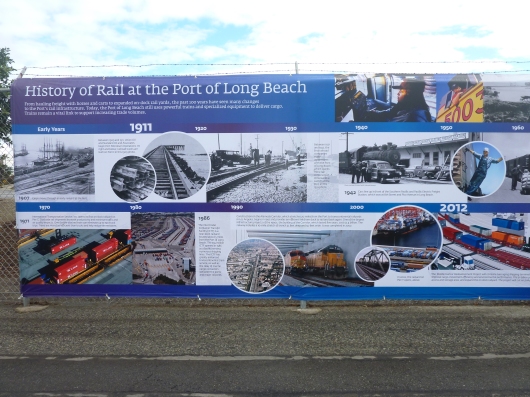 Just some of the educational displays posted at the free rail tour put on by the Port of Long Beach. 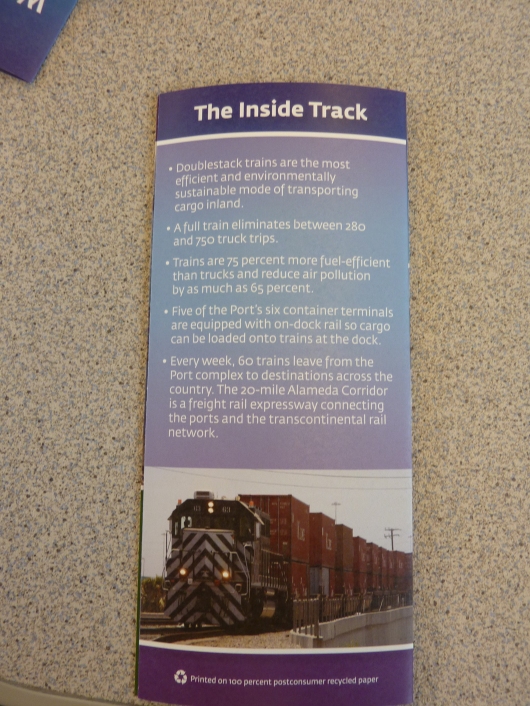 The pamphlet from our free rail tour of the Port of Long Beach.

A Hanjin ship being unloaded at the Port of Long Beach. 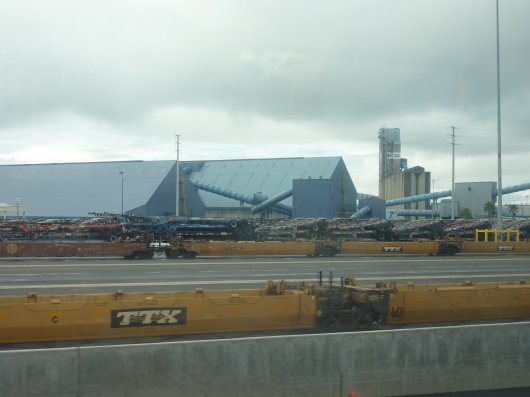 A petroleum coke plant at the Port of Long Beach. The entire operation is closed in an effort to reduce pollution, including the conveyor belts that run from building to building (the tubes pictured here). Through these efforts along with a variety of other programs, the Port has reduced airborne petroleum coke dust by more than 80 percent in the past several years. 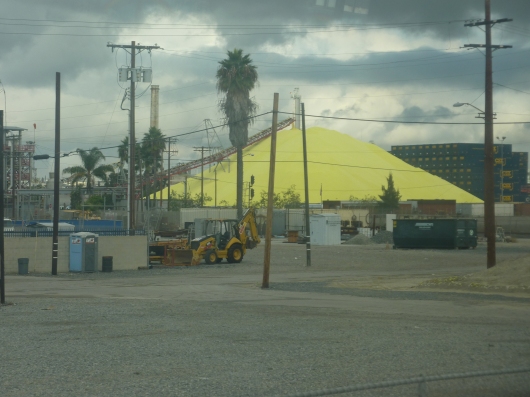 This bright yellow pile is sulfur. No, it didn’t stink, or we didn’t smell it anyway while riding the rails down at the Port of Long Beach. 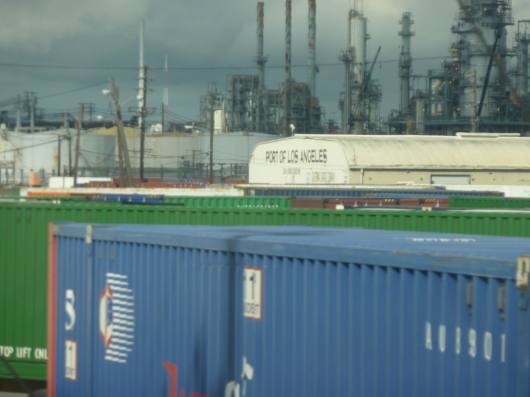 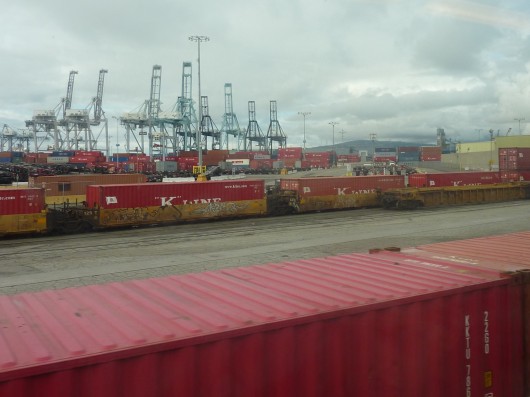 Containers abound down at the Port of Long Beach (CA).

What a wonderful hour we had down at the docks! Thanks to passenger cars and engines from Metrolink, attendees rode in comfort through port operations. Port employees provided their usual wonderful hospitality that we’ve grown accustomed to whenever we’ve come in contact with anyone from the Port of Long Beach. Port staff also did a tremendous job educating attendees on how rail has helped with pollution reduction efforts and other programs across the Port and city of Long Beach in general.

A view of one of the four local oil islands behind the breakwater in Long Beach (CA). While the weather was a little wonky that Sunday morning, the views were still as spectacular as ever from our free train tour sponsored by the Port of Long Beach.

A view of a Carnival Cruise ship docked for the day, just one of many splendid views while aboard our free train tour of the Port of Long Beach.

The photos tell the story better than I can in this case, so I shall just let them do the talking. Or showing. Enjoy! 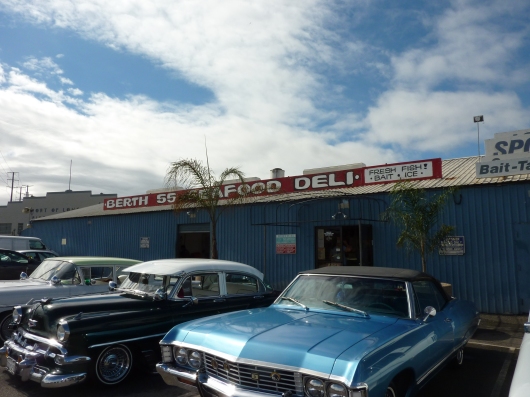 Berth 55 is a landmark seafood restaurant and market in the heart of the Port of Long Beach (CA).

Oh, but before I go, I do have something to say about where we went to eat afterwards. After hearing about all the hub-bub in regards to Berth 55, a long-time seafood stand down at the Port in threat of closure, and after riding past the restaurant on the train tour twice, it was settled that this was where we’d go for lunch. 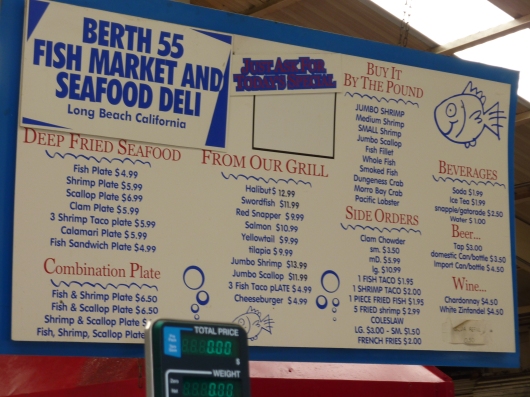 The menu board at Berth 55. These are the regular offerings; other daily special boards exist with about just as many – if not more – options to choose from. I stuck with ordering from the main board so I didn’t get too overwhelmed! 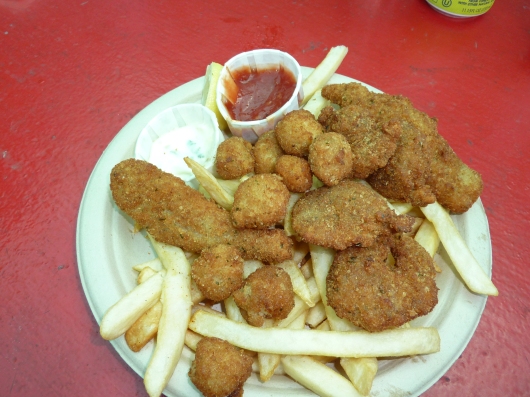 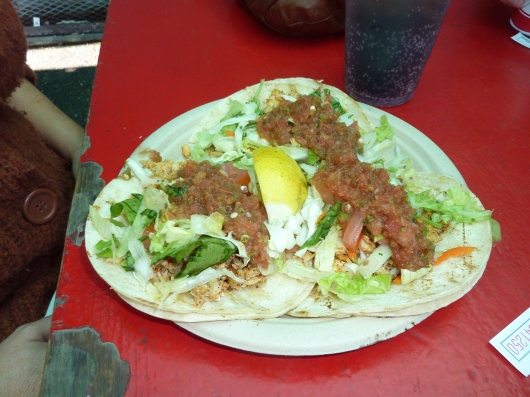 Two words for Berth 55: Local flavor. Or another two words: Yum yum. I got their mixed combo of fried fish, shrimp, and scallops, which came with fries. The scallops were small but very sweet and extremely reminiscent of a fresh, local catch cooked up at a port-side stand, so pretty close to perfect given the environs. The shrimp was very good and their taste brought me straight back to my childhood; fried shrimp used to be a favorite of mine growing up whenever I’d be out at a seafood restaurant (or just on a Friday at home). Auntie Kel got the grilled fish taco plate, which she said was very fresh and tasty (and BIG). C got a fish sandwich, which was the same fish on my combo plate, and he was satisfied (admittedly, the fish was my least favorite of the three items I had, but still was good). 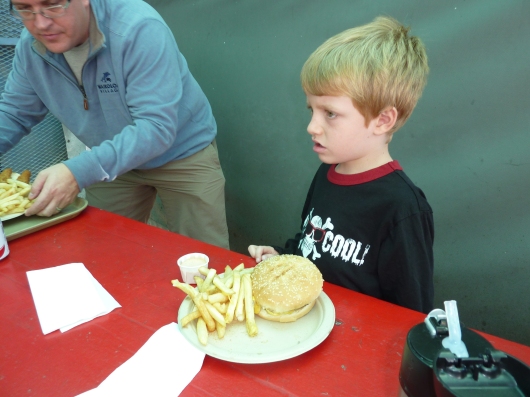 Maybe T is bummed he ordered a cheeseburger while we all ate delicious seafood down at Berth 55. No matter, as he ate that burger right up anyway!

While we’re not quite up to regular seafood consumption yet with T, he devoured the cheeseburger he got, which was your standard pre-formed patty with melty American cheese that you might find at a local seafood stand like this one. However, since it’s just the sort of thing that a five-year-old would devour, we were very happy this was offered. 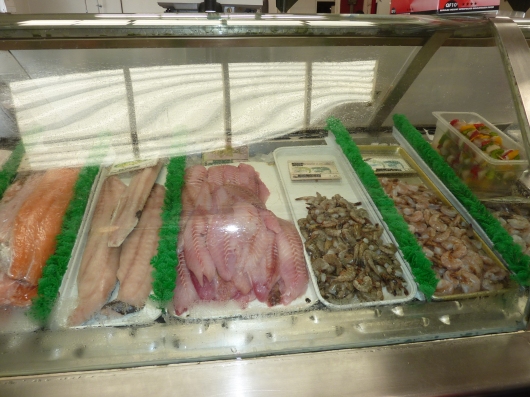 A close-up of part of the seafood counter at Berth 55. 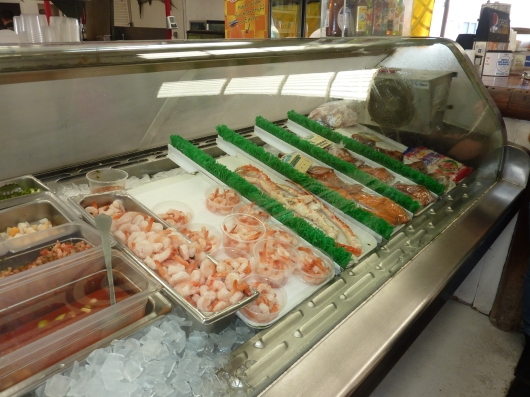 Another close-up of part of the seafood counter at Berth 55.

Berth 55 is also a regular fish market where you can buy fresh fish daily from the counters to take away and prepare at home. We didn’t get any on this day, but it sure was tempting! We’ll be back. 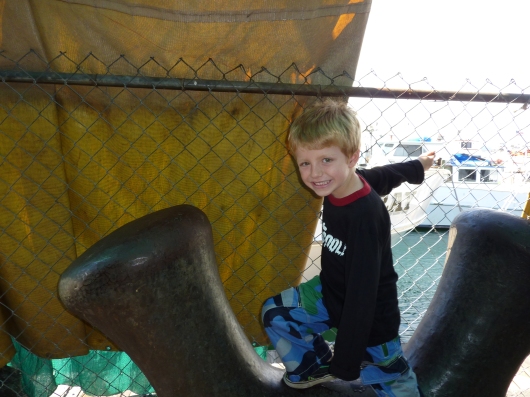 A special note to all my East Coast (USA) RMT’ers… it’s very hard to digest the news coming in this week from the “Superstorm” of 2012. There’s a saying that goes, “Any port in a storm,” and I could not help but think of that saying as I wrote up this post all while this terrible tragedy broadsided the Northeastern seaboard this week. I hope that you and yours are safe and sound post-Sandy and mostly if not entirely out of harm’s way. Thinking of you all, hoping for the best, and wishing for a speedy recovery and clean-up effort.