Happy Halloween season, RMT’ers! Yes, it’s an entire season; in fact, Halloween has become the number one predictor in how well “The Holiday” retail season will be for businesses. Scary!

Ghoulish photobomb! Yeah, our vampire is getting a little tired after years’ of wear and actual rips and tears, but T still loves the guy.

T was this parrot when he was just one-year-old! Yeah, T, that doesn’t really fit much anymore. But it’s sure fun to dig it back out year after year and say “Hello!”

Some of our Halloween decorations in action, including that motion-sensor skeleton in a cage (thanks Grandma Beep for the Halloween gift that keeps on giving season after season!).

Now that T’s birthday celebrations have come to a close, we decided that this past weekend was the perfect time to  unleash the Halloween spirits at our house! Out came the Halloween decorations, big and small, along with themed books, movies, baking supplies, and crafts. We’ve had a blast reunited with our “old friends” but realized that our decoration collection could use a couple of new additions this season, so we’ll hit the stores this week to see what else we can dig up.

T’s been a crafting machine since we dug out the Halloween stuff last weekend! Here he’s making some wall decorations for our house.

After we finished the house decorating (minimal at best for now as I never know if we’re going to be home handing out the loot I don’t get TOO into cloaking the humble abode in all things black and orange), T retreated to his room with the new-found crafting supplies and ordered me to stay out. OK, no problem T! 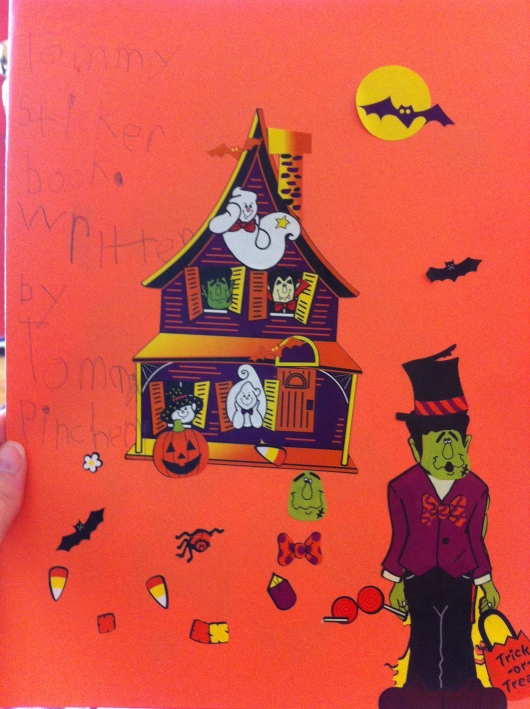 The “cover page” of T’s Halloween sticker book he made for Mrs. K! 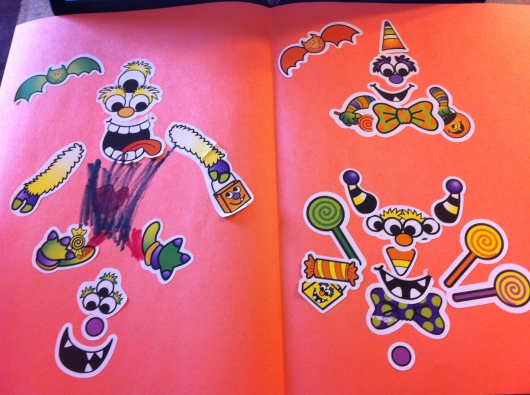 Back cover of T’s first sticker book, just one of many crafts he’s created since Halloween officially began around our house last weekend.

After about 45 minutes (!), T finally asked me to come in and see what he’d been up to… and the above creation is what T showed me. When I asked who that was for, he told me, “Mrs. K because she was out sick last week.” Too sweet.

One of T’s leftover sticker books, along with some recently depleted sticker sheets. I have an idea about how to get you some more “Halloween” stickers, T! 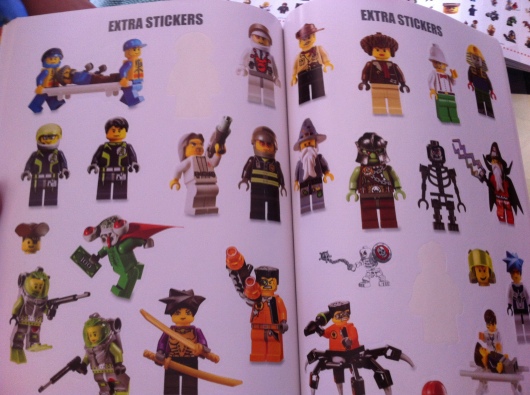 There are TONS of “Extra Stickers” in the backs of those activity books, so don’t toss them once your kids finish those “scenes”!

T points out a “Halloween” sticker from his sticker book stash that he wants me to collect for his projects.

I think this is “Scarecrow” from the Batman series, but T doesn’t care. He’s just “Halloweeny” to him for his current purposes.

I used old sticker backings to collect stickers from T’s sticker books so he could put them with his Halloween crafting supplies.

After T finished making the monsters from this activity folder, he had plenty of extra face and body parts leftover to use with other Halloween-inspired arts and crafts projects! 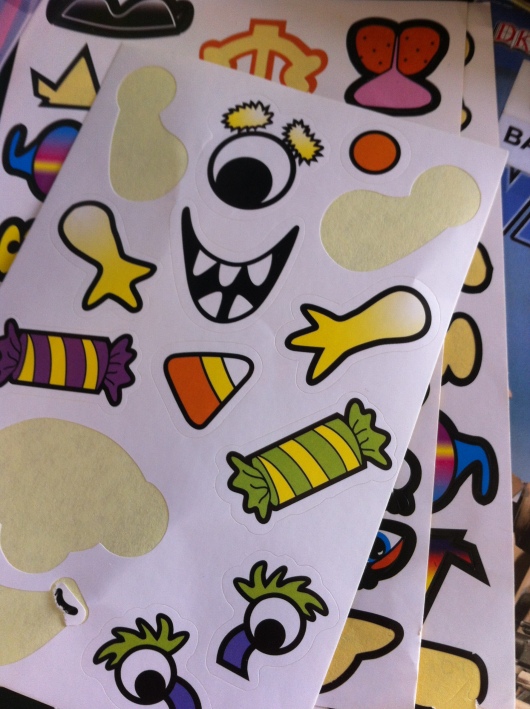 Thankfully, I hold onto all of T’s sticker books once he’s finished with the different scenes. You might be familiar with these activity books, but if not I usually find the DK-branded ones at Costco year-round but almost always at the holidays. We rely on these when traveling (especially in restaurants), yet I never thought of relying on them for holiday decal finds!  The books come with PLENTY of “Extra Stickers” at the back of the book large and small and in all sorts of themes and moods once your child has long finished the directed activities.

T putting together another Halloween “sticker book” for his teacher. She was out sick last week for a couple of days, so he wanted to make some things to make her feel better (aww!).

A page from one of T’s Halloween “sticker books.”

T wants you to have a most freaky-fantastic Halloween, RMT’ers!

I think I did pretty good in finding T some extra “Halloween” stickers, don’t you? Well, I found at least enough that were suitable for him to make this other “Halloween Book” for his teacher. I will say though that the decals aren’t optimal for construction paper, and that’s because the adhesive has more of a masking tape consistency as the stickers are made to be placed on and off the sticker book pages, not permanently applied to paper, or permanently applied to anything for that matter (which is good when you see that your kid has put them on furniture, the walls etc.). So if you want to get super-detailed about it and make sure those stickers stay put, just apply a little extra glue stick or laminate the project afterward (we didn’t bother though).

Have a wicked Wednesday, RMT’ers!

How have your kids creatively used the “extra stickers” from their activity books? Please share!