We happened to be on the Big Island of Hawaii for New Year’s Eve 2012 (New Year’s 2013, since I don’t exactly know how to clarify this one, so there’s all the info for you!). It was the second full day of our trip, and it wasn’t anything that we’d made grand plans for. After all, the grand plan of the week is that we were in Hawaii; Happy New Year’s to us!

Of course, that New Year’s Eve morning got us thinking, and we (C more so) decided it might be nice to go out for a lovely meal of some sort. Nothing super-spendy (didn’t budget for the hotel’s party or anything like that, after all!) and nothing super-late (because of T being with us and because, well, we aren’t late birds either). Of course, with it being Hawaii, it wouldn’t – or shouldn’t? – be that difficult to come up with something simple for the occasion, right?

Yeah, well guess what? It’s still New Year’s even if it is Hawaii. The first few places we called pretty much laughed in our ears about us wanting a reservation for that special evening. C and I then looked at one another and settled on a nearby chain place that he nor T had never been to and I’d only been once before (hint: the name roughly translated means “pasta cooked over an open fire”). So we called them, and they happened to be taking reservations but ONLY because it was New Year’s. They also actually had a time left that would work nicely for us, so we snatched it. Heck, at least by going with this spot we knew we’d be in good company with a lot of other non-planners (and families) and in a pretty casual atmosphere, so T’s behavior no longer came into play (Happy New Year?!). 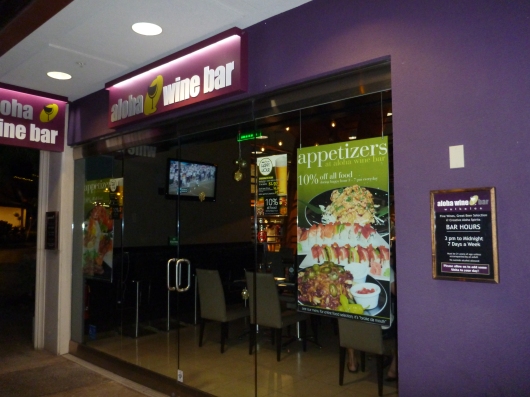 Aloha Wine Bar at the Island Gourmet in the Queens’ MarketPlace in Waikoloa, Hawaii (Big Island).

Before heading for our holiday meal, we popped into the Aloha Wine Bar across the promenade from our restaurant for a quick drink beforehand. The very fact that it was a wine bar was enough to pique our interest… and we’d maxed out on sugary sweet cocktails for the time being anyway. 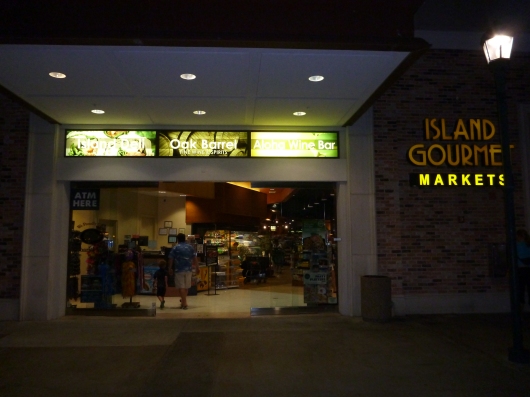 The place was empty. I don’t know why. Well, I have a hunch actually. See, the Aloha Wine Bar is adjacent (as in, part of) the Island Gourmet market at the Queens’ MarketPlace. Yes, the same mall I talked about and that we visited in this post. C likes to refer to this store as an “ABC on steroids,” meaning, the store has all your typical tchotchkes and hotel room booze and snack needs, along with sushi-grade fish and prime-cut beef and a wonderful hot and cold spread of other local fare and traditional Mainland mainstays like ready-to-heat-and-eat mac-and-cheese. 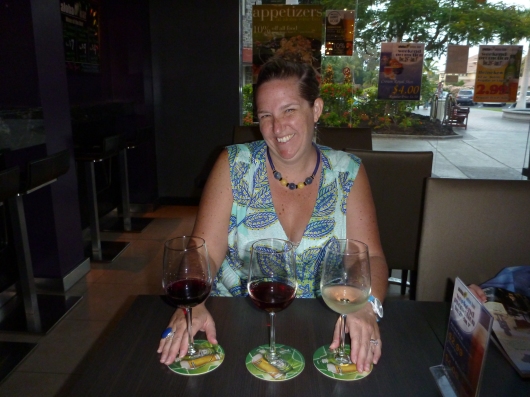 Me with my wine flight at the Aloha Wine Bar. I had a nice New Zealand Sauvignon Blanc, an Oregon Pinot Noir, and a lovely Justin Cabernet Sauvignon. 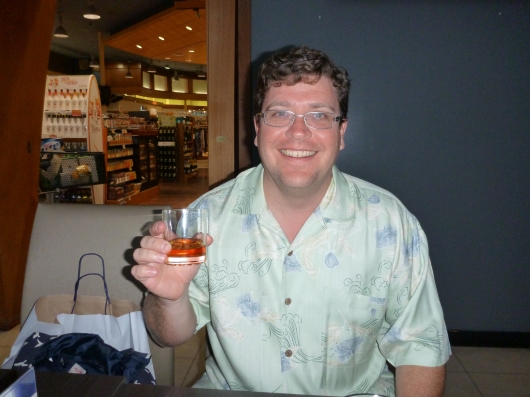 C had an 18-year Scotch at the Aloha Wine Bar. He was ecstatic to get a drink that didn’t have fruit juice or rum in it.

I am glad we popped into Aloha Wine Bar. Their wine list is phenomenal, along with boasting a pretty lovely little bar. C got a 18-year single-malt Scotch to sip on, while I created my own wine flight (which is any choice of three-2 oz. pours of wine from anything off of their by-the-glass menu). Their 2 oz. pours were incredibly affordable (most being priced between $3-10), so this was definitely the way to go wine-wise. But even more reason to pop in is for their “pupu”-style dinner menu.

Remember how I said this place is adjacent the Island Gourmet? Well, guess what? Most if not all of the food on Aloha Wine Bar’s menu are items directly from the market, which means high quality, top of freshness, and lower prices, shockingly low prices actually. Their bar’s food overhead must be lower than your typical establishment of this sort since  the food’s next door ready for the making, with staff already on-site to cook and prepare it to order. That or they just like to give their food away perhaps. When we asked the bartender if the food was actually good, she raved. That was exactly the cue C needed to call and cancel our previous reservation for something a lot more “ono.” 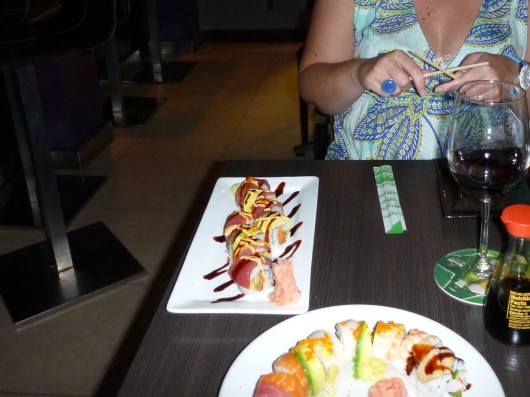 Our two sushi rolls, spicy tuna and rainbow, at the Aloha Wine Bar. I want to say that during happy hour these were easily under $10 a piece. Crazy cheap – and insanely tasty! 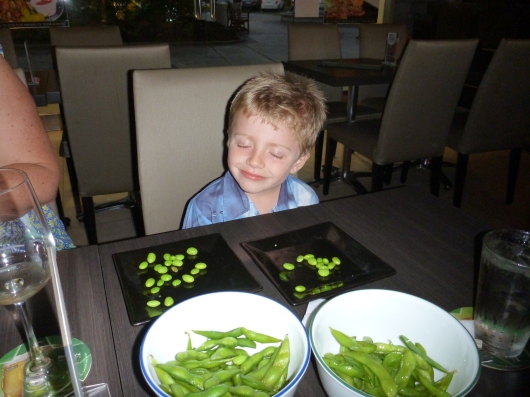 T gobbles up gyoza at the Aloha Wine Bar.

Would you call these mini-cheeseburgers? I know, not so mini, right?! T loved these also (and so did we actually!).

We got sushi rolls priced between $5-10. T got gyoza, mini-cheeseburgers (that weren’t all that mini, two regular sized 1/4-lb. burgers cut in half actually), and edamame for a total of around $12. But the best surprise of the spread was C’s 7 oz. NY Strip Steak “appetizer” plate for $9.99. Oh and PS – we were there before 7 p.m., which meant 10 percent off all appetizers (I forget what the drink specials were, sorry, but I think we took advantage of those as well).

Our total bill came in right at $100 for all food, two rounds of drinks, and a generous holiday-level tip. That’s extremely unheard of for a New Year’s Eve dinner, and is also almost unheard of for a similar level of meal on the Big Island anywhere. I can only imagine what the other fish and steakhouses nearby were charging for a similar spread on this night or any other day really. 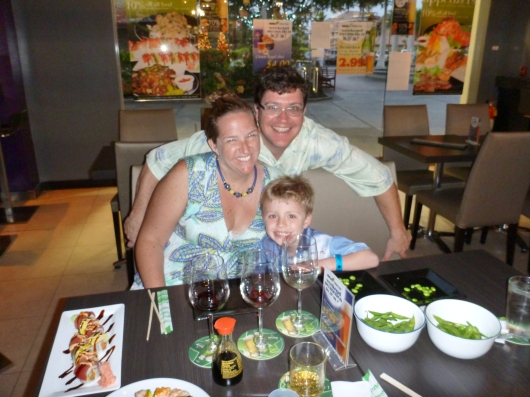 Hope you all had a great New Year’s with your families, RMT’ers! Aloha!

Our dinner at Aloha Wine Bar was absolutely the surprise meal of our trip in the best way possible: Tasty, affordable, and family-friendly (kids are allowed in so long as it’s before 10 p.m. I think it was and they just can’t sit belly-up to the bar anytime, which is all pretty standard kids’ rules for a bar-eatery of any sort really). So if you find yourself in Waikoloa around dinnertime, don’t overlook this dinner option by its location. It’s a happy surprise for your palate and wallet alike. And for us, it was the perfect start to 2013, even if we wrapped up our meal well before midnight. But hey, it was 2013 somewhere, right?

I hope you all had a great New Year’s Eve, RMT’ers! How did you and your kids ring in 2013? Together? Apart?