To start our first full day on the Big Island of Hawaii, our family woke early. Very early. Remember, there’s a two-hour time change back, and while that doesn’t seem like a big deal, it’s just enough to mess with your biological clock, especially a little dude’s biological clock.

T at Big Island Breakfast at Water’s Edge at the Hilton Waikoloa Village. This was taken around 7:30am on our first morning on vacation. He’s raring to go!

But no matter. We took advantage of the early (and gorgeous) hour rising by getting a full breakfast in at the Hilton Waikoloa Village’s Big Island Breakfast. Once full from the full buffet of offerings, which ranged from local island fruits and baked breads to Japanese offerings of fried rice and grilled fish – with the usual American bacon-and-eggs fare mixed in for good measure – we decided that the sun was still low enough to set out on foot down the road toward the local petroglyph field.

T leading us to the Waikoloa Petroglyph Preserve. We took a well-paved path in a much more modernized part of Waikoloa Beach to get there. It was a lovely morning walk together as a family.

Just about one mile down the road from our hotel along Waikoloa Beach is the Waikoloa Petroglyph Preserve. It was a lovely morning for a stroll, and it was a place that we’d yet to check out on our previous visits (hard to believe with it being so close by!). 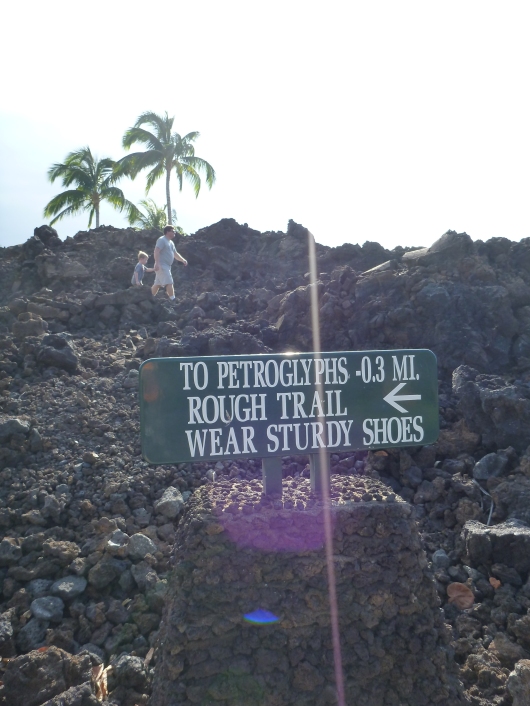 This sign greets those coming from the King’s Shops parking lot headed toward the Waikoloa Petroglyph fields. Wait boys, you’re headed the wrong way! Kidding, I just managed to get the photo on our way out from the hike. 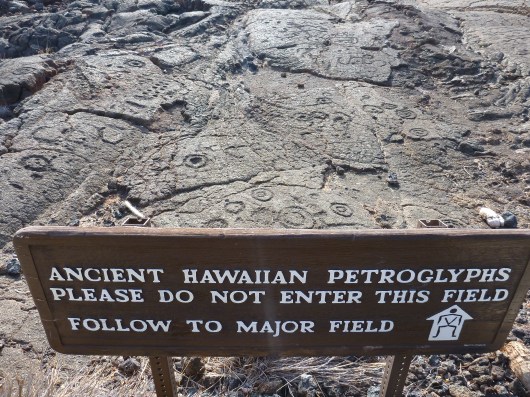 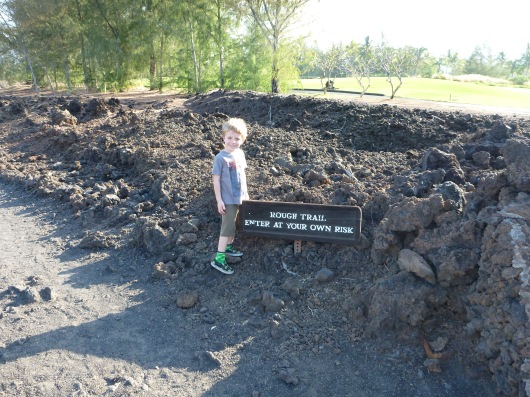 T before setting out into the Waikoloa Petroglyph Preserve. Heed the signs!

The path to the main petroglyph fields on Waikoloa starts about a quarter-mile down from the King’s Shops mall It runs right along a stretch of the King’s Trail, a 175-mile ancient lava road through a large part of the west side of the Big Island (you can read more about hiking the Big Island and the King’s Trail here). It’s fairly flat, though I and the signs posted definitely recommend closed-toe shoes for walking on the uneven surfaces of the lava rock and flow that makes up a greater portion of the hike. 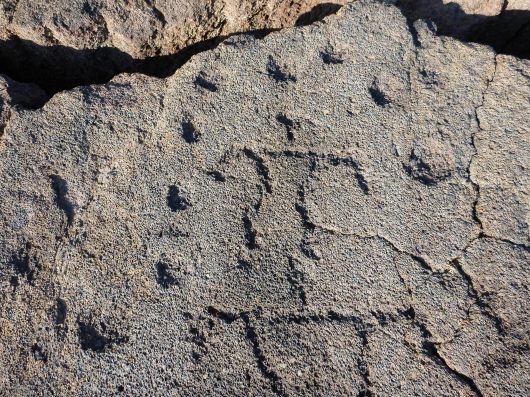 As you can see from the photos, these petroglyphs (many dating back to the 16th century) are and have been well-preserved despite the more recent and modern development that’s come up around them. I suspect there were more carvings at one time, of course, but at least someone along the way had the insight to set aside part of this rich history for us to enjoy today. The petroglyphs do tell a story of Hawaii’s past, long before it became a part of American history; T really enjoyed exploring old Hawaii and “reading” about it, too.

To get to the Waikoloa Petroglyph Preserve, from KOA Airport take Hwy. 19 North  for 20-25 minutes. Turn left at the first stoplight you come to. The King’s Shops mall is on the right side; park near the gas station for the closest departure point on foot. The main petroglyph field begins about 0.3 mi.the walking path and runs along the King’s Trail.

3 responses to “The Writing on the Rocks: Waikoloa Petroglyph Preserve”