On Sunday, a true California golden legend passed away. Huell Howser was just 67 years young, but boy oh boy, what AMAZING things he did with the years he was here on this Earth, especially during the years that he spent here in California.

Huell Howser at Broguiere’s Dairy in December 2010. He passed away Sunday (January 6, 2013), leaving behind an amazing and golden legacy for all Californian residents and visitors alike.

Mr. Howser, a Tennessee native, came to California in the 1980s. After a local TV news career out-of-state, he decided to try “show business” after his move West. “Videolog” was his first TV venture in the late-80s, which was the early years’, short-film version of the later-infamous, half-hour length “California Gold” television series that he launched in 1990. Those were just two of several other series that soon followed, such as “Visiting” (all of his television series can be searched under Huell Howser Productions). His shows aired weekly on several Southern California local public broadcasting stations and continue to air in reruns nightly to date (KCET, KOCE, and KVCR come to mind off the top of my head as to where I’ve seen his shows air personally over the last 10+ years). 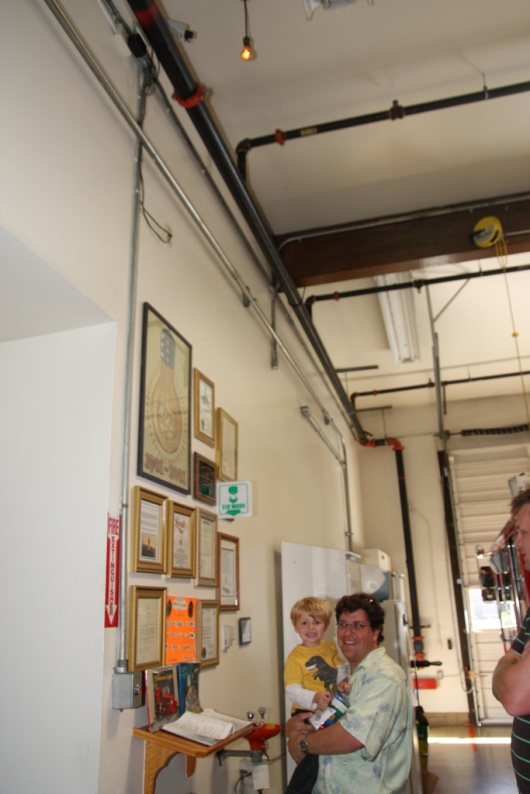 T and C under the Centennial Bulb in a small local fire house in Livermore, CA. This light bulb has been burning for more than 100 years, which we discovered all thanks to Huell Howser. So when our road trip travels brought us through the area in Fall 2010, we had to stop in and see the light.

C signing the visitor book for the Centennial Bulb (September 2010). 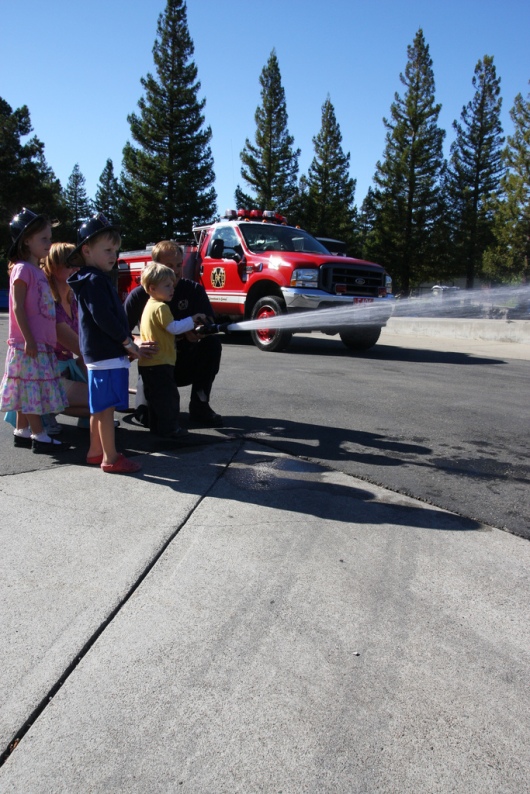 We stayed a little longer than expected at the Centennial Bulb fire house. We thought we were just popping in to see a light bulb, but when the firefighters asked us to step out back to shoot fire hoses off for about 15 minutes, well heck, how could we say no?!

Some might say Mr. Howser was nothing more than a goofy, simple man with a microphone who somehow talked a lone cameraman into following him around year in and year out as he folksily carried on about life’s simple things with the average citizen. The oft-spoofed personality somehow had the charisma to carry on a 20+ minute conversation about topics such as donuts, rivers, egg nog, and light bulbs. Yes, Mr. Howser did a half-hour show on a light bulb, and we actually went to see it for ourselves (it actually turned into quite a memorable outing for us as you can see above). 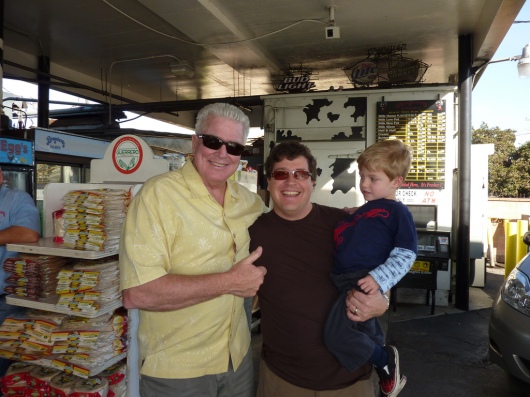 Huell Howser, C, and T at Broguiere’s Dairy in December 2010. 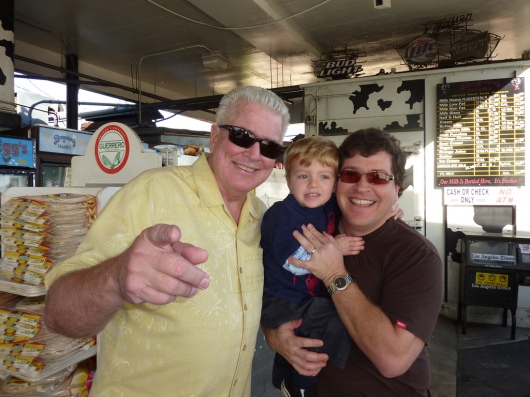 T, me, and Huell Howser at Broguiere’s Dairy. So rare to see him without his trademark sunglasses, so this one’s a real gem (December 2010).

Even better than the light bulb adventure for us, however, was our first visit to Broguiere’s Dairy (which we found out about because of you-know-who). When we pulled up at the curb, we saw Mr. Howser at a distance; his tall stature and loud fashion choices were pretty hard to mistake for anyone else. Yes, we got to meet him and shake his hand, and he graciously let us take pictures with him and talked with us for several minutes as we bought our quarts of nog and milk. When we told him of our trip to the Centennial Bulb, he said, “You actually went to see that old light bulb?!” For those familiar with the infamous Howser twang, you can only imagine just how memorable of an experience this was for all of us (even T, who at the time was just three years old).

RMT’ers, Mr. Howser was so very much more than a simple man to us average people. For decades, Mr. Howser guided visitors and residents of the Golden State to out-of-the-way hidden gems of restaurants, landmarks, and sights all very much worth seeing. And the best part about his shows was that most if not all of his featured destinations are entirely family-friendly. He was much like a personal tour guide and travel agent for the great state of California night after night, giving so many people wonderful inspiration for their next California adventure. The fact that we now no longer have a chance of running into him at the dairy (or any of the other dozens of places he’s been) to thank him again for all he’s done – or to ask him to sign one of these photos of us above – will make those excursions just a little more bittersweet.

Our family is going to miss Huell Howser tremendously. As he’d say it, he really was… California’s Gold.

RIP Huell. YOU were amazing.

Here’s a list of the places– off the top of our heads and in no particular order – that we have discovered and visited, all thanks to Huell Howser. This list doesn’t even cover the places we still have yet to go (another list for another time). If I’ve blogged about a place, I’ll link to my own post below; otherwise links will direct to an episode guide on Huell Howser Productions. Another option to view is to click through to this blog at Chapman University, home to the Huell Howser Archives, and do a search there of the episode(s) and topic(s) you’re looking for. Keep on traveling, RMT’ers.

Hemet (Shuffle Board Capitol of the World)