On Sunday some friends of mine and I walked in the inaugural Miller Children’s Hospital iWalk for Kids. Want to know what (or mostly who) moved us to walk? 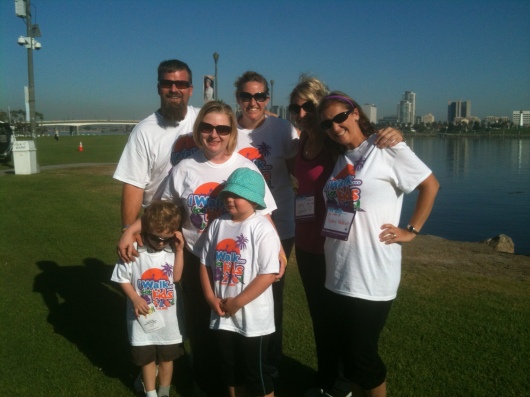 Meet Sydney and her family. It’s for families like these that my friends and I (also pictured to the right) walked in Sunday’s inaugural iWalk for Kids, a fundraiser for Long Beach’s (CA) Miller Children’s Hospital.

See that child there in the green hat? That’s Sydney, a seven-year-old girl in our play group. She was diagnosed with a malignant tumor earlier this year. She’s been fighting for a few months now against a rare and tricky form of cancer and has had to endure numerous procedures, treatments, and hospital stays during her war on cancer with only more battles upcoming (through next June 2013, or what’s estimated for now anyway, could be longer).

But you know what, RMT’ers? Sydney’s winning. She’s a fighter. She’s a positive force in some otherwise dark days in her and her family’s life story. She’s attending school again on a fairly regular basis and has begun participating in her regular life routine again. And let me please repeat: She’s only seven.

Blair Cohn of Bixby Knolls Business Improvement Association was just one of several community figures on hand to help out at Sunday’s iWalk for Kids.

My friends and I went out Sunday morning for the inaugural iWalk for Kids put on by Miller Children’s Hospital in Long Beach (CA).

I’m not sure about you, but I’m pretty certain that Miss Sydney can teach us all a little something about attitude and gratitude. So when a good friend told me that she’d signed up for the iWalk, an event established to raise monies for various programs at Miller Children’s Hospital, I didn’t think twice about signing up. I did it for Sydney, of course, but I also did it because of our own personal encounter with Miller’s Children’s Hospital.

That’s T just a few days old in his NICU incubator in Miller Children’s Hospital’s “Fat Farm.” That’s the room where the babies graduate to (or spend their time in) if they are large enough to not require more specialized NICU care and/or treatments. T was receiving special fluids in the NICU as he hadn’t received the required nutrients from me during his last several days (possibly weeks) in utero. He was breech and born via c-section slightly early (though to term), but his positioning was such that my placenta became rapidly depleted and cut off in utero. He was born 5 lbs. 10 oz. but dropped to just 5 lbs. within 24 hours after birth, which required the brief NICU stay. Needless to say, it was one awesome day when T moved from his more specialized room to the Fat Farm! 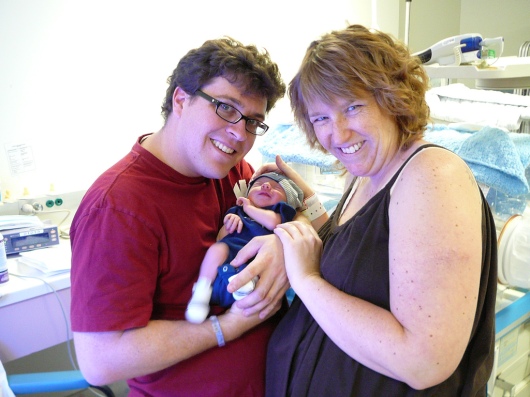 October 8, 2012: A very happy day. That was the day that both T and I got discharged from the hospital for home. Hallelujah!

Sunday’s event brought me back to our own experience with the Miller Children’s staff, which was extremely remarkable. It all happened more than five years ago when T was born, but it still feels like yesterday. Though T only stayed in the NICU for three days (which seemed like a lifetime), we knew he was always safe and in good hands. The staff always let me and C visit whenever we wanted. The nurses never laughed at me every three hours when I dropped off my miniscule amounts of breast milk for them to feed to T in those early days (I am talking about an ounce, sometimes less… I never was the best pumper, folks). And above all else, the hospital’s nurses and doctors were humanly professional. What does that mean exactly? It means that while they had a very important job to do, they never discounted our part in that job as the parents to advocate for our child, they never dismissed any questions we had, and they always had a hug for us if we asked for one or just looked like we needed it – either in comfort or in celebration.

Sydney’s mom echoed my own sentiments. “I agree, we are also grateful for Miller Children’s.” She said. “We have had experience with the General Pediatrics, PICU, and Hematology/Oncology units, and all have been nothing short of amazing. Their family-centered approach makes all the difference. Because of all our needs, we have been assigned a ‘Nurse Navigator,’ who is our go to person for meds, appointments, and doctor communication.”

That’s local fitness expert Body Mack. He led the iWalk for Kids’ participants in a group session of calisthenics before we headed out. Always warm up before any workout, RMT’ers! For more information about Body Mack or his fitness programs, you can contact him at his website: http://www.bodymackfit.com/ . 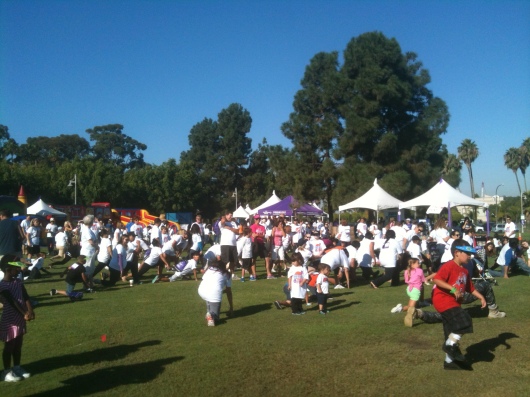 iWalk participants getting stretched out before the two-mile inaugural event! 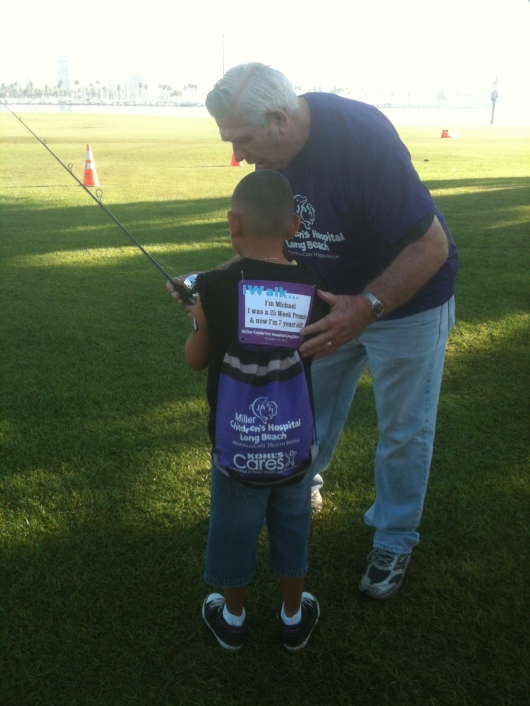 This child walks for… himself. He also got together with a local chapter of “Cops and Bobbers,” who just one of several local community groups that set up a fishing game booth for the kids as part of the iWalk for Kids game area for pre- and post-event family fun.

Another child out walking for himself and for so many others. Inspirational.

iWalk participants walking up and over Queen Mary Way in Long Beach (CA). It was a perfect morning for a walk like this. 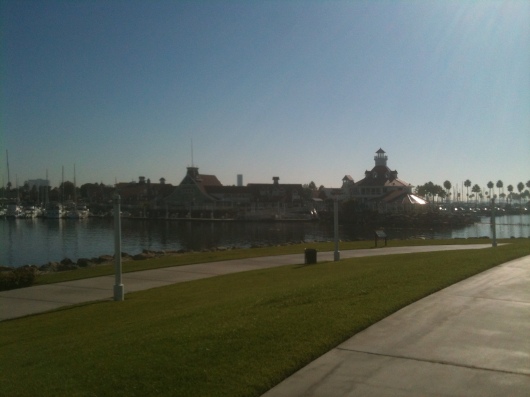 Parker’s Lighthouse in Long Beach (CA). Just one of the awesome views during Sunday’s inaugural iWalk for Kids.

A view from the Queen Mary Way bridge down to the boardwalk in Lighthouse Park in Long Beach (CA). The two-mile route took iWalk participants through some of the more picturesque parts of the city, only adding to the beautiful morning we already were having.

So on a gorgeous Southern Californian Sunday morning, it wasn’t just the beautiful weather that motivated us to walk (though we really could not have had a more perfect backdrop for such a fantastic event). We walked for Sydney and so many countless others receiving treatments just like she is, and we also walked in honor of those who help these kids every single day. We are thankful that the Miller Children’s staff are in these kids’ lives, and we’re eternally grateful for the work they did with our own kids (all of us in our party of four who walked either delivered at Miller Children’s and/or know babies who were delivered or cared for there during the last several years). We celebrate Miller Children’s commitment to the continuous care of other local children, and we salute their ongoing service to the community.

KOHL’S CARES donated just over $200,000 to Sunday’s iWalk for Kids, making their inaugural event that much more of a success. Amazing!

Thank you, Miller Children’s Hospital, and thank you, kids! You have done more for us that you’ll ever know – including moving us to get up early on a Sunday morning for an extremely worthy cause! As one of my dear friends said after the event, “The two-mile walk was good for the heart and great for the soul!” Couldn’t have summed it up better myself. 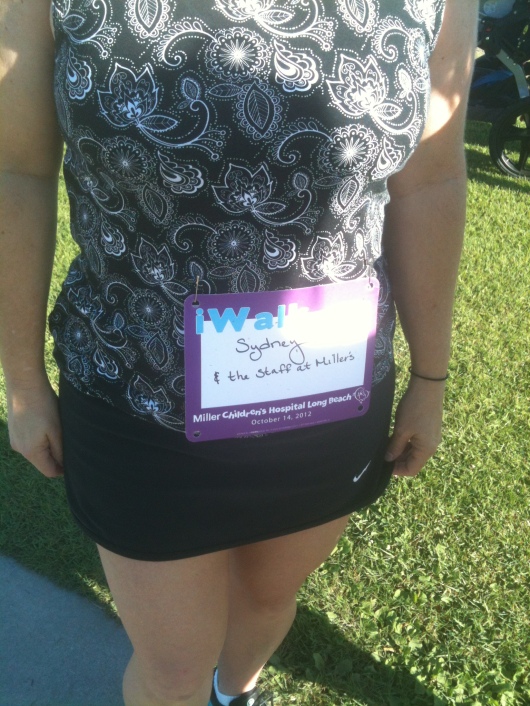 To donate to Miller Children’s Hospital, you can give through the end of October 2012 via Sydney’s iWalk team, which is, “HOPE – For Children with Cancer and Blood Disorders.” In addition, my parenting-play group is directly supporting Sydney’s family with a fundraiser for restaurant gift cards (click here if you wish to give something toward this cause). Sydney’s family is always on the run between doctors’ visits and the like, making cooking a rarity as they are hardly home together at meal time… but they still need to eat, right?! Any amount helps toward either of these causes – and thanks!