How lucky was I to have been able to attend both days of this year’s California Women’s Conference? Very.

I have mentioned my good luck in this instance a few times already on my Twitter feed as well as with a few posts and photos to my Facebook page, but I am at long last finally getting around to archiving some of my top experiences here on the blog for myself and for all of you, RMT’ers.

Along with Executive Director and CEO of Event Complete Michelle Patterson (I know she’s up there somewhere!), these are a great deal of the women (and men) who made this year’s California Women’s Conference possible. Thank you!

I don’t know how to choose just a handful of photos and memorable takeaways from the conference because it was just that wonderful of an experience. No, really, it was awesome, and not because of the star power present among us common folk – and there was a LOT of star power present, wowzers – but because of the fact that I literally allowed myself to take it all in rather than hound around and gather up stories like the reporter in me might have wanted to do in a previous life (I also got to do some reporting pre-event, so that definitely helped to get that out of my system!). In fact, I had a chance to get a media badge for the conference, but I turned it down for the simple reason that I wanted to lose myself in the two-day affair and simply marinate in the experience rather than take notes on it for everyone else.

But having said that, of course I wrote down a few of my favorite moments and quotes, and now it’s about time that I shared them with you, RMT’ers. Think of this post as CWC 101 for those who were not able to attend, but also think of it as a push for you to sign yourselves up for this conference next year if you find you are available and can be in Southern California October 3 and 4, 2013 (yes, the dates are out already!).

Enjoy the photos and quotes below! And for more photos and quotes, you can check out the album I put up on my Facebook page (and those still aren’t even close to all the pictures I snapped, but they’re by far some of the better ones).

Actress, comedian, and just all in all wonderful woman Geri Jewell and me having a lovely moment at this year’s California Women’s Conference. Yes, this photo was already posted on my Facebook page, but I want it here for the archives as it’s definitely near if not the top moment for me from the two-day event.

OK, so this is the best moment of all from this year’s California Women’s Conference. I asked Geri Jewell to sign my library copy of her book. Yes, I did! Don’t worry, I will return it, I promise! Anyway, when she went to sign the inside leaf page, she and her sister (who was with her) noticed that the date stamped in the book (the one the library puts in when they receive the book into the collection) was their mom’s birthday. Jewell even wrote a special notation about the date with her autograph. Their mom has since passed away, may she rest in peace, but in that moment, both Jewell and her sister said she was right there with us. Wonderful and true story, RMT’ers!

Actress Marcia Cross of “Desperate Housewives” and “Melrose Place” fame was a keynote speaker on the topic of “Balance.” In sum, she spoke to the fact that balance is yet just another label hurled at mothers and a total myth (seriously, think about it). Cross encouraged the audience to break free of these labels and expectations.

Stedman Graham (AKA “Oprah’s Man,” and though he’d prefer not to be known in this manner, he has a wonderful attitude about it) encouraged his keynote audience to embrace “love” and then all else will fall into place. He spoke on the topic of finding your true identity and how this translates into business successes. He also was kind enough to sign my California Women’s Conference program afterward during the book signing portion of the morning’s events last week.

I have followed “the greatness” of Les Brown for a few years now (of his 30+ years on the speaking and radio show circuit). So when I heard he was speaking at this year’s California Women’s Conference, I knew this definitely would be a breakout session I’d not miss no matter what. He and others spoke about how to know when you are ready to write and launch a book, or write and launch any product for that matter (website, e-book, how-to guide, TV show, etc.)!  Brown left the audience with this to think about: “Never let what you want to say get in the way of what your audience needs to hear.” Amen! 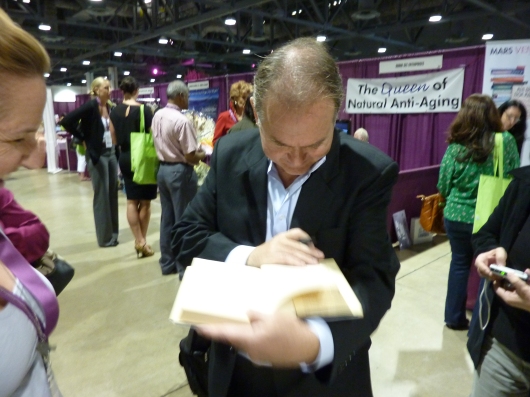 Author and relationship expert Dr. John Gray signs my first-edition version of his best-selling book, “Men Are From Mars, Women Are From Venus.” I have a better photo with him that I’ll post on Facebook (notice I am off to the left here), but this photo is particularly memorable because he’s caught here actually checking that my book is in fact a first-edition! While Gray says that men aren’t so much into details, they certainly seem to be into checking the facts!

“Fly-Girl” Vernice Armour was the surprise speaker for me at this year’s California Women’s Conference. Famous for being the first African-American woman naval aviator (and the first African-American woman lots-of-roles actually), she let us know that we already “HAVE permission to engage” in whatever it is we’re wanting to do. “Everyone wants to create a breakthrough; everyone just doesn’t know HOW,” Armour said, but with her seven step plan called “Zero to BREAKTHROUGH” we can get ourselves down the right path to success.

Legendary singer Helen Reddy capped off the closing night of the California Women’s Conference with a dramatic speaking performance of her infamous 1970s hit song, “I Am Woman.” She also received this year’s “Woman of the Year” award for the event.

I’ll end the photo montage there. I could go on and on (and ON), but I won’t, and I think you get the idea anyway. Also, a very special thanks to T.B. for taking most of the photos above that I appear in. She was a great conference buddy and turns out isn’t such a bad candid photographer either!

This event was truly an inspirational getaway for me and one I won’t forget for a long, long time. While I am not too terribly close to taking any huge leaps of my own into the business world just yet (still a solid couple of years that T has these short Kindergarten days!), I am thankful, grateful, and better for the California Women’s Conference experience. With that, I encourage anyone who’s considering re-entering the working world (now or later) and/or looking at making any drastic changes to their current career path to attend next year’s conference (one or both days). It’s time and money well-invested.

Many thanks again to E.M. for pushing me to get out there and go this year. And lady, you helped put on one heckuva show for California’s women, too. Be proud of your efforts!

What inspires you, RMT’ers?