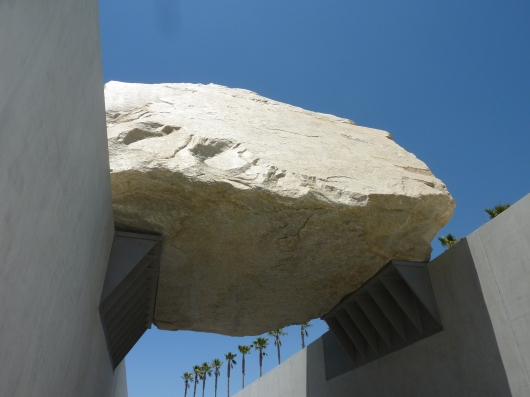 Levitated Mass by Michael Heizer is on exhibit now on the Resnick North Lawn (no admission ticket required) outside of LACMA.

A few months ago I told you about the large rock that rolled through our town on its way to its permanent home at the Los Angeles County Museum of Art (LACMA). We enjoyed the rockin’ festivities surrounding its transport, and we knew that once installed at LACMA this summer that we’d make time to get over there sooner than later to see it put in its final resting place.

The plaque that sits on the Resnick North Lawn identifying Levitated Mass by Michael Heizer. 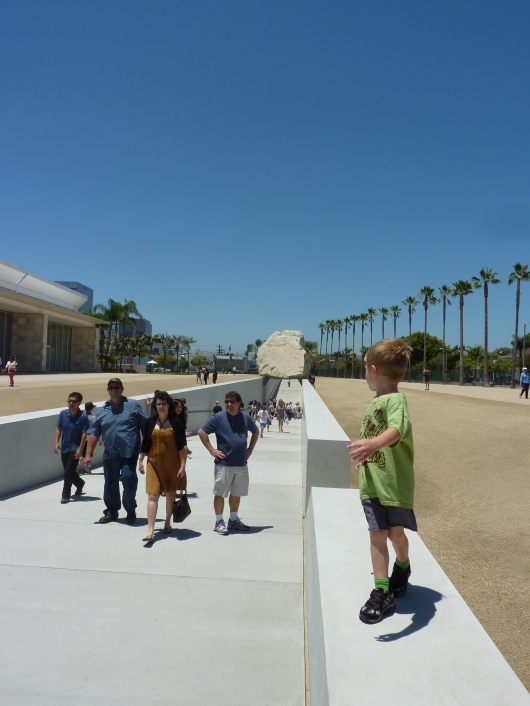 T turns around to check out Levitated Mass behind him. Yep, T, it’s a big rock, or to put it in terms a kid might understand, it’s approximately 50 elephants heavy and about 1-1/2 football fields’ distance to get down to the other end of the exhibit, according to “Unframed,” LACMA’s official blog.

C levitates an upside-down T in front of LACMA’s latest behemoth of an installation, Levitated Mass.

And now here we are! Levitated Mass (AKA the 340-ton granite megalith) was installed on LACMA’s Resnick North Lawn a couple of weeks ago, and all last week (through Sunday July 1) LACMA was kind enough to offer free entry for all residents of the so-called “rock” neighborhoods. Yes, LACMA provided free entry to all of its galleries to any and all residents who were in any way inconvenienced by the routing of the rock from its original home in Riverside County through a dozen or two different cities, towns, and neighborhoods to its permanent resting spot on the LACMA campus (do note, however, that just as with many if not all of LACMA’s other outdoor exhibits, there’s no admission charge required to view or walk through Levitated Mass). 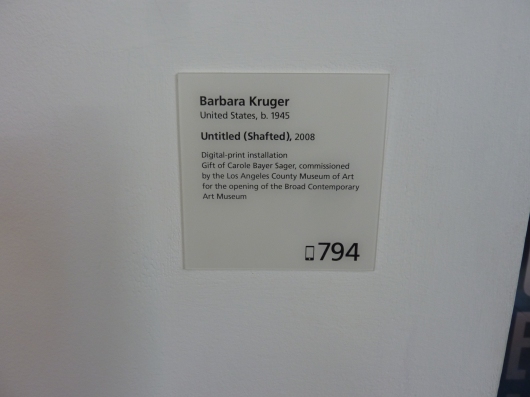 Information on the elevator mural art inside of Broad Contemporary Art Museum at LACMA.

While we not inconvenienced by Levitated Mass’ transport in any way (in fact, we got to celebrate the rock’s visit for two whole days here in Long Beach during the first week of March), we still happily accepted LACMA’s kind offer of the free admission. And we didn’t even get to take full advantage of the offer because of T’s membership in the Arts for NEXGEN program, meaning he and I were free already anyway, so it was just C who took advantage of the freebie offer. It was nice to be able to duck inside for a bit for a return visit to Chris Burden’s Metropolis II exhibit, followed by a ride on the large and partially glass elevator in the Broad Contemporary Art Museum (both favorites of T’s).

I am not sure how an umbrella would help protect one against Levitated Mass should it dislodge, but I suppose visitors have their own interpretations of the piece and how they wish to experience it. 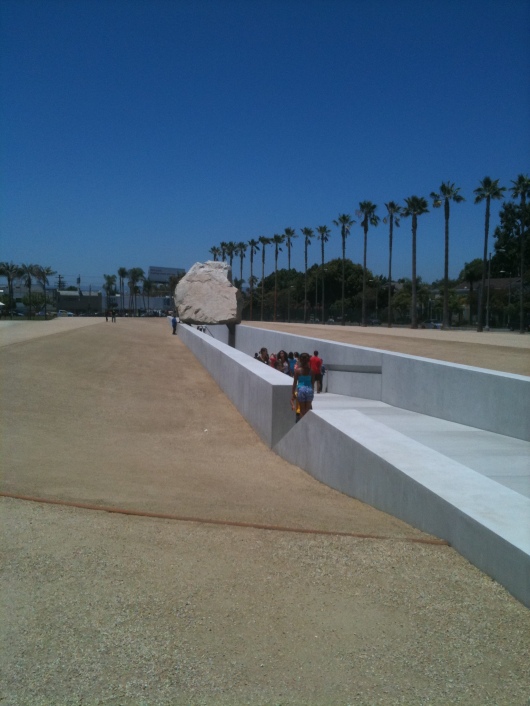 A long-view perspective of Levitated Mass by Michael Heizer on the Resnick North Lawn at LACMA.

Levitated Mass is large, but I suppose you’ve already figured that out. The long, symmetrical 450+-foot-long pathway on approach to and underneath the rock with its clean, straight lines along with the plain, sandy landscaping around the installation gave me a very honest sense of just how large the rock really is. As for the levitated portion of the program, it appears from underneath that the rock is NOT bolted down; I looked up and it appears to have some deep-cut grooves along two of its sides that allow for it to be wedged into place along some strong steel scaffolding attached to the concrete tunnel and pathway in some form and fashion. In other words, words don’t really do Levitated Mass justice (well, my non-art critic POV, common-folk words don’t anyway!), so just go see it for yourselves, RMT’ers!

The La Brea Tar Pits are always a fun, free afternoon for families.

C, please step away from the shiny gift shop rocks! Because, well, really?! 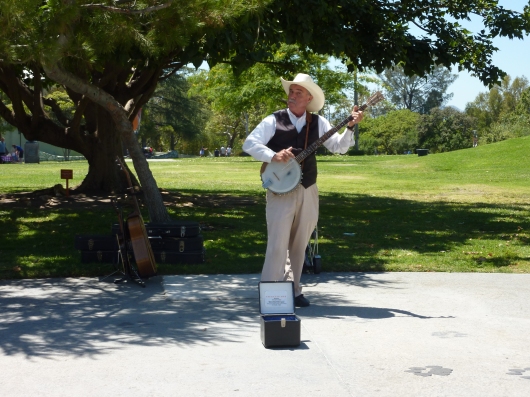 Charlie Cox has been serenading visitors to the La Brea Tar Pits for years (decades?) now. We always stop to listen to whatever he’s strummin’ on his ol’ banjo… and he takes requests! T’s particular to train songs, which happens to be one of Mr. Cox’s specialty genres. Choo choo!

A new-to-us park performer outside by the La Brea Tar Pits. He plays songs on rigged-up, amplified glassware, and he takes requests also! 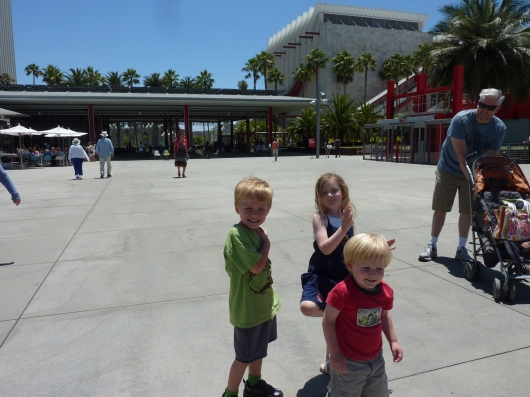 Once we were done marveling at this massive engineering feat, we ducked into the Page Museum and Tar Pit Discoveries and wandered through the La Brea Tar Pits, all which are right next door to LACMA. We also took some time outside to enjoy our favorite street musician, Mr. Charlie Cox, along with discovering some new-to-us performers, and we also visited with some friends whom we happened to run into (yes, the same family that we ran into last time we visited LACMA and the tar pits!). 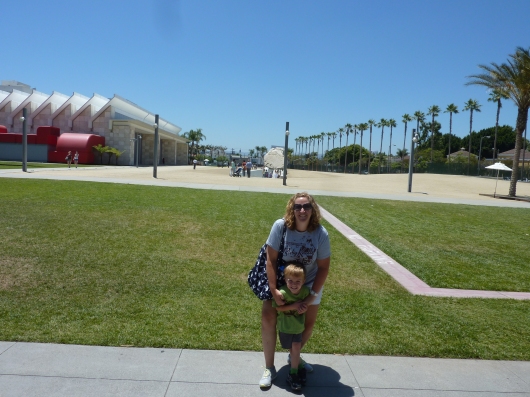 T and I wore our “I saw Levitated Mass in Bixby Knolls” T-shirts to commemorate our visit to Levitated Mass at LACMA this past Friday. It was about 3-1/2 months earlier that T and I saw Levitated Mass parked on Atlantic Ave. in Long Beach (CA) while on its journey from Riverside County to LACMA. Not the best capture, but at least I managed to hold T still long enough to oblige me the one photo of us together in our shirts!

It’s a good sign that your time at the La Brea Tar Pits and Page Museum is winding down if your kids are rolling down the hill.

Hope you can roll by LACMA soon to check out the rock!