Got Cupcakes? Just a small portion of the cupcake offerings at Crumbs, Beverly Hills.

Cupcakes, cuppies, or cute mini-cakes… whatever you want to call them, they’ve taken over the sweet street-scene formerly known as the bakery for several years now. What many started out calling a mere trend now have been forced to accept the fact that these tiny-but-mighty treats appear to be here to stay. I for one shall raise a cup(cake) to that! 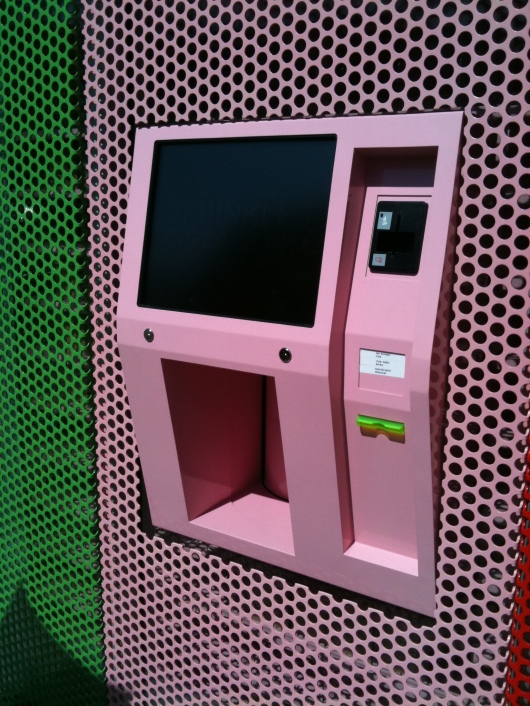 The Sprinkles Cupcake ATM can be found right outside of their Beverly Hills flagship bakery. As it cranks out cakes for customers, it sings, "I love Sprinkles, yes, I do, yes, I do!" a song that I still cannot get out of my head!

So when my friend and I learned that Sprinkles in Beverly Hills was to open a cupcake ATM (read: fancy-schmancy vending machine), we decided to make a morning of it. We headed off in search of the pink-painted pastry dispenser to see what all the fuss was about, given that the cost of the cupcake inside of the machine was 50 cents higher than walking inside of the shop to purchase. Just the cost of doing cupcake business, I suppose (and 24-hour access)!

When it rains, it pours cupcakes out of an ATM at Sprinkles in Beverly Hills.

The Sprinkles Cupcake ATM is anything but a shady experience.

Upon walking up to the machine, we noticed a store employee holding an umbrella. It was a gorgeous day, but perhaps just a bit too sunny on this side of the street to read the display on the cupcake ATM. Hence, Sprinkles – putting service above all else as always – provided a personal valet to help hold back the sun so as not to spoil our cupcake e-experience. So very sweet of them!

Presenting cupcake! The Sprinkles ATM dispenses sweet happiness to all who wait on line for the opportunity to do so.

Our personal package of cupcake delight, all thanks to the Sprinkles Beverly Hills' Cupcake ATM.

I won’t bore you with the details of how we got from machine-to-cupcake (you can view a video online here for the sweet- and low-down on that if you wish), but in just under two minutes, each of us had our chosen cupcakes purchased, dispensed, and in our hot little hands, complete with individualized gift box and wooden spork ready for immediate consumption. ATM customers then are directed to the tables nearby; treated just like store customers, we were welcome to sit and enjoy their cakes on-site, which was very kind and again indicative of Sprinkles commitment to customer service excellence. 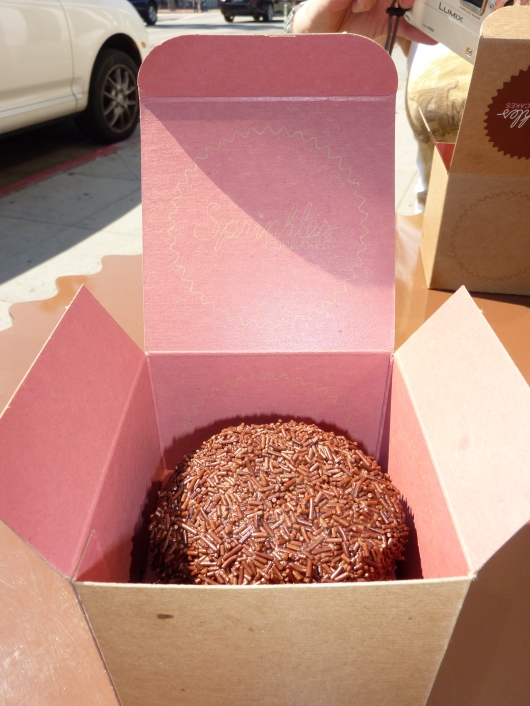 My Sprinkles cupcake: Vanilla Milk Chocolate, topped with, what else, chocolate sprinkles.

Then again, why wouldn’t Sprinkles welcome us to stick around longer? All that did was get us thinking, well, after we polish these off, let’s go inside and see what else the place has to offer! Of course once we did that (and while on a sugar high to boot), we each left with a box of a few more hunks of sugary goodness to enjoy once back in the comfort of our own homes. Well done, Sprinkles, well done.

The sidewalk sign for Crumbs Bake Shop greets us as we approach for entry.

The storefront of Crumbs Bake Shop in - where else with that palm tree in the background - Beverly Hills.

As we were (finally) leaving Sprinkles, some neighbors at the salon next door asked us if we’d ever been to Crumbs Bake Shop, which was another bakery that just happened to be down the street a couple of blocks. When we said we hadn’t been there, what we really meant to say was, we hadn’t been there YET! And with that, we checked the parking meter and determined we had more than enough time to double our cupcake fun.

A close-up of the candied confections that Crumbs Bake Shop conveys to its customers.

Once inside, we were astounded by what Crumbs could do with cupcake decor. Topped with pretty much any candy bar or other confectionery you can think of, the cakes beckon you back to your childhood guilty pleasures, such as cotton candy or Hostess-brand cupcakes. Crumbs even offers full-sized cakes that resemble the smaller cakes for your more-than-party-of-one needs. 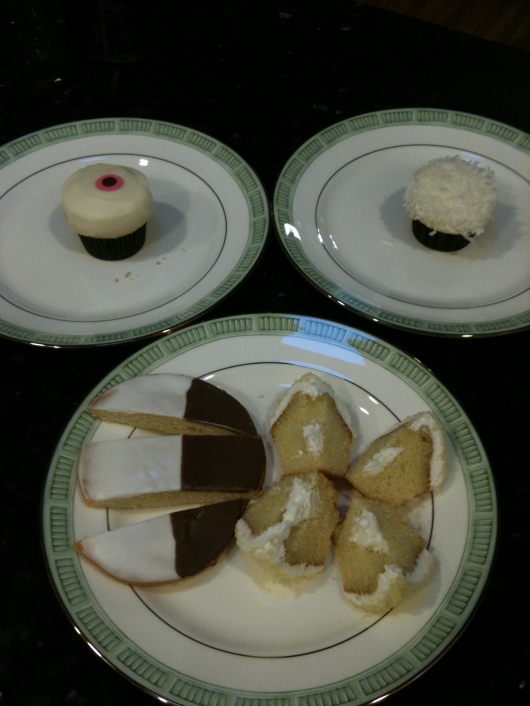 However, despite their festive contributions to the cupcake scene, I just wasn’t that into Crumbs. See, when I’m trying a cupcake for the first time, I want plain old vanilla, or at most, vanilla-chocolate icing. Sadly, that was hard to come by at Crumbs; the closest I got was a triple-vanilla-something-or-other, which was a vanilla cake topped with vanilla buttercream and vanilla cake crumbs, filled with some kind of whipped vanilla concoction. It honestly was just too over-the-top for my vanilla flavor needs, along with being too pricey (at $4 dollars per cake, compared to $3.50 down the block at Sprinkles) and too large (twice the size of the industry standard) for my particular cupcake preferences. That and T didn’t even want to finish two bites of the cake I brought home for him. What the what?!?! Yes, I was surprised, too, but maybe the apple just doesn’t fall far from the tree and these weren’t his cup of cake either.

T enjoys one of his favorite treats in his whole wide world: A Royal White-Vanilla Cupcake from Frosted Cupcakery in Long Beach (CA).

Now I can’t wrap up a cupcake post without mentioning my hometown honey, Frosted Cupcakery. Frosted has catered to Long Beach’s (CA) cupcake demands for over five years now, and its owners more recently have opened up shop in West Hollywood (CA) and Hermosa Beach (CA). Looks like our little hometown honey is growing up and out, but thankfully it’s not at the expense of my local store. 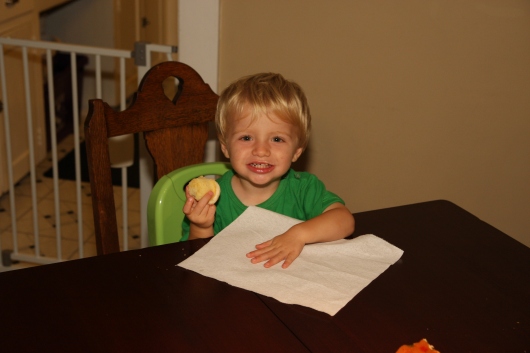 A two-year-old T enjoys a leftover Frosted Cupcakery Mini-Cupcake from his second birthday party. I looked and looked and this was the only photographic evidence I have of those cupcakes from that party. I'm more surprised that there were actually any leftovers! And, oh yeah, for those RMT'ers paying close attention (and as a complete aside), that wall behind T there and to the right is what used to close off our kitchen from the rest of the living room. We demo'ed and remodeled our entire kitchen just a couple of months after this photo was taken.

Be it a special occasion or no occasion at all other than driving by (yes, it’s that dangerously and deliciously close to us), Frosted Cupcakery continues to be as delightful as ever, and we continue to enjoy its offerings on a regular basis… probably a bit too much. Come to think of it, T and I have no plans later in the afternoon, hmm (and mmmmm).

A box from another Long Beach bakery, Sweet and Saucy Shop. See, it's an addiction, RMT'ers! 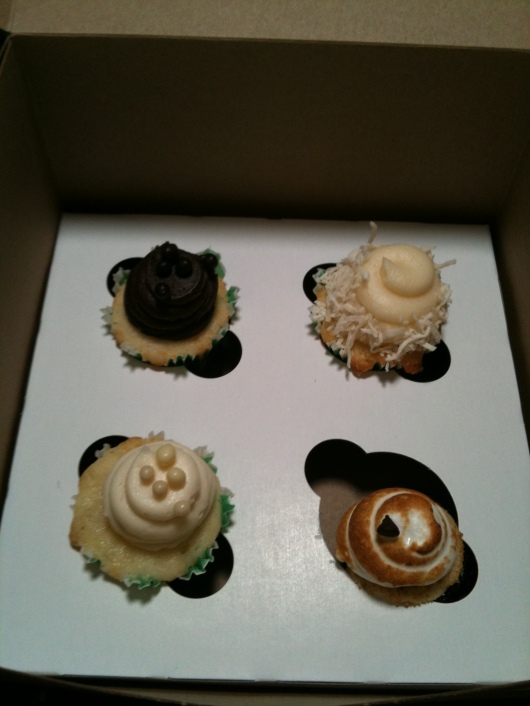 Just four of the flavors of miniature cupcakes for the offering at Sweet and Saucy Shop in Long Beach (CA). They might be small in size, but each are two big bites of bold, beautiful sweetness. From top-left clockwise: Vanilla-Chocolate Buttercream; Vanilla-Coconut; S'Mores; and Vanilla-Vanilla Buttercream.

Have a great weekend, RMT’ers – and save me a cupcake! Please?!