A box of delicious donuts from Donut Man in Glendora (CA). They are well-known all over Southern California for their fresh strawberry, peanut butter, custard-filled, cream cheese-frosted, and tiger tail donuts.

I have written about my love for all things cupcake, but to date I have failed to mention my love for the more simpler, more accessible donut. I don’t know how that’s been possible, RMT’ers, and for that, I’m sorry for holding out on you!

A couple of tiger tails wait patiently behind the glass at Doughnut Deli in Long Beach, CA.

Doughnuts or donuts, however you spell it, these sweet and mostly breakfast treats are ones that I’ve loved my whole life. In fact, the first real job I ever had was in my town’s local donut shop. Yep, RMT’ers, when I was 16, I would wake up every weekend morning at 0430 to  prep coffee, fill donuts, and open up shop with the owner by o-dark hundred AKA 5 a.m. That job was the means for putting gas in my car, and donuts into my life on the cheap-cheap (gas back then was pretty cheap, too, come to think about it!). I bet you can imagine how much I enjoy telling T that story, especially when he wakes me up in the early morning hours (and without donuts to offer me either, imagine that!).

Though that gig numbed my palate for all things round, glazed, and gooey (and killed my spirit for anything before sunrise) for several years after the fact, I still love and appreciate a good donut. And now that we live in Long Beach (CA), ohmygosh, I do declare that we have the best donuts this side of anywhere. There’s a shop on every corner it seems, and chain donuts these are not.

There it is! The elusive bacon-maple bar (the owner ‘s words, not mine), alongside it’s rarely seen cousins, blueberry buttermilk glazed cake donuts. Both are just two of the tasty treats offered up at Doughnut Deli (Long Beach, CA).

My bacon-maple donut from the OC Fair last summer. As you can see, bigger is not necessarily better when it comes to a donut as they only stay fresh for so long. It was good when it was hot and fresh though! PS – that plate is 9 inches in diameter.

Most recently, I’ve discovered Doughnut Deli at Warlow and Pacific Place (near the Metro blue line stop). When I heard that Doughnut Deli carried – of all things – bacon-maple bars, I was there within 24 hours of learning of its existence. The last time I even heard of a bacon-maple donut was the OC Fair, and I quickly wrote that off as a simple, novelty fair food due to the fact that I’d not yet come across a shop that regularly carried these sweet and savory delights. Doughnut Deli’s bars are anything but simple, offering a complex mixture of the pancakes-and-maple-syrup-bacon breakfast bite they were aiming for per their own description. 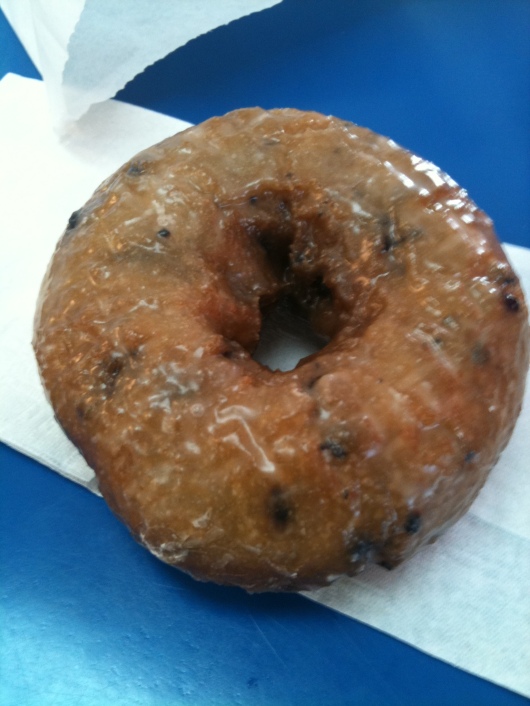 The first blueberry buttermilk glazed cake donut I had in Long Beach was from Simone Donut. I liked it so much it became a quest to find other shops that carried this flavor, as these sell out often at Simone thanks to their tastiness and proximity to CSU-Long Beach.

Not only does Doughnut Deli carry what they’ve termed the elusive bacon-maple bar, they also have blueberry buttermilk glazed cake donuts. While I was growing up, this flavor was only, if ever, offered in a denser bar, almost scone-like form. Doughnut Deli’s round cakes are anything but dense; the best way to describe them is that they are cakey yet moist, and somehow light, airy, fruity, and fresh all at the same time. The only other shop locally that I know of that carries blueberry donuts in the round is Simone Donuts; while theirs are pretty great, too, they operate 24 hours and their blueberry donuts come out sometime around midnight and sell out often thanks to their proximity to the local college. It’s for those reasons I have to give Doughnut Deli the edge on freshness and availability.

A tray of tiger tails at Donut Man (Glendora, CA). These, like the ones at Doughnut Deli, are about a foot long and crazy-good… and big enough to share to maximize freshness, RMT’ers.

Then there’s Doughnut Deli’s tiger tail – a foot-long, chocolaty-and-cinnamon-y twist of tastes. Yes, a foot long, or about the length of three standard donut twists. I consider this their flagship offering, as it’s the only tiger tail I know of and have seen outside of Donut Man (Glendora, CA). 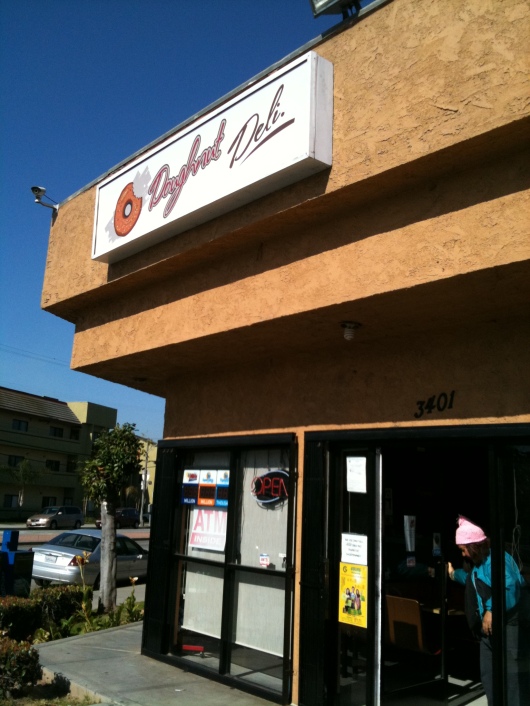 Doughnut Deli has a modest storefront location near the Wardlow Blue-Line Metro station in Long Beach (CA). For customers not taking the train, off-street parking is available (yay!).

The dynamic duo behind Doughnut Deli are Hien and Amber Quoc. Hien helped me the day I visited, and he gave all props to his wife Amber for their inventive flavor combinations and recipes. With degrees in Nutrition and Culinary Arts, Amber is a former pastry chef that ultimately wanted to bring her creations to life in her own shop someday, so the two of them went for it and took over the space that is now Doughnut Deli. Months into their venture, their popularity has grown so much that they are happy to take advance orders via phone for orders as small as one donut to a few dozen. Their perspective is that if there are enough folks advance ordering one donut each that no order is too small for their shop. Good customer service and business practice if you ask me anyway!

My haul from Doughnut Deli: from left, ham and cheese croissant, tiger tail, blueberry cake, and maple-bacon bar. PS – again, this is a 9-inch plate.

Though today (Friday April 20), all croissants at Doughnut Deli are 50 percent off when you give the verbal discount code “Long Beach, California.” It’s all due to a Facebook promotion of local businesses that is ongoing this week thanks to marketing mogul and overall good guy Justin Rudd. I took advantage of this discount and tried the ham and cheese croissant; slightly warmed up, this sharp yet smooth ham-and-Swiss comfort-food delight dissolved in my mouth nosh after nosh (NOTE: for orders of a dozen croissants or larger, please call ahead).  Go get yours this weekend, RMT’ers!