C and T head up to the Mt. Waterman ski area. While the area is officially closed to skiers this season, it's wide open for a great day of snowy play!

I know I’ve blogged a bit about our love of the beach, but our little family also likes other climates just as much. We tend to spend a lot of time out in the desert (mostly in the summer when it’s VERY hot, and VERY cheap for a VERY nice room… stay tuned come June for more on that!), and we also enjoy the occasional visit up into the mountains, especially if it has something to do with having fun in the snow. I spent some time in a snowy climate during college (and very shortly after, winter can be a brutal beast), and C spent time during college trekking up to snowy climates to go skiing, so the snow is something that’s part of our own life stories, and it’s an appreciation we’d love to pass along to T as well.

After a few years of not much snow in our local mountains, we finally timed our trek right, and we were able to get a snow play day in with T this season! We headed up to our favorite day-trip snow spot, Mt. Waterman, and while they haven’t had enough snow to open up for a ski season for about two seasons now, they always tend to get enough snow each year for some fantastic non-ski play days. Given we’d just had a nice, cold rain the previous weekend, we took a chance and hit the road in search of our own snow day this season. 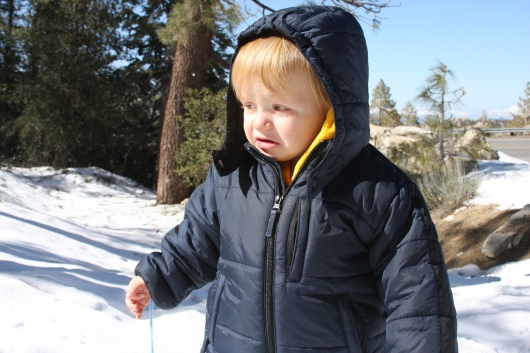 This is a photo from our "Five Minute" Snow Day in 2009 when T was just one-year-old. I don't think T could have been more upset with us waking him up for this cold, icy white stuff.

We’ve done this just once before right after he turned one-year-old in 2009, and let’s just say the outcome of that trip was about as textbook of a fail fun-wise as you could get (note to you newer RMT’ers… don’t pump a kid full of food and/or milk before taking an hour-long drive up into the mountains with an elevation change of about 6,000 feet). Yes, there was snow and we got our obligatory “T’s first experience in the snow” photos, but regardless of the snow on the ground, a yakking kid mixed with waking him up from a car-snooze just doesn’t make for ideal conditions.

C and T get set for a day full of snowy fun at Mt. Waterman!

So here we are again, just a little more than three years since that fateful trip, out on Snow Day 2. Thankfully, we have much better news to report this go-around. With that, let the snow games begin! 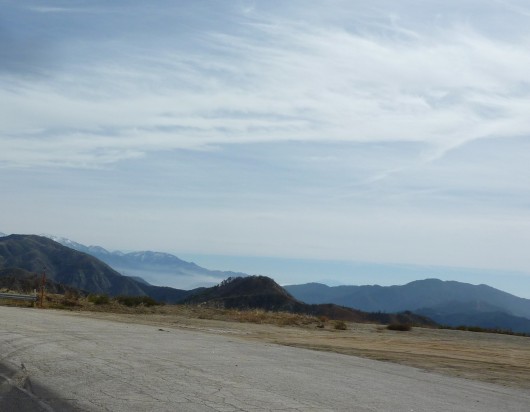 A view from lower elevations on our drive up Angeles Crest Highway (CA-2) toward Mt. Waterman. Notice there's no snow along the road here, but you can see the snow in the distance (top left). We're hopeful! 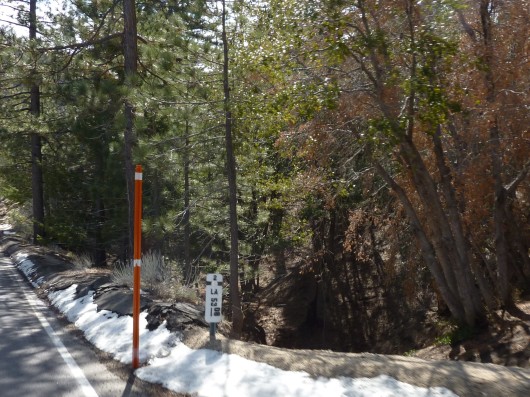 First, the drive went awesome, either because we didn’t stuff him full of food and drink prior the windy drive up the Angeles Crest Highway, or because he borrowed some motion sickness wristbands from a pal (thanks again D and W!) – or both! Also there was little traffic to speak of, along with completely clear roads. As you can see, the views on the way up were gorgeous, and while we were a little worried for a while that there might not be snow to play in, our worries fell away once we saw snow patches on North-facing slopes about 5,500 feet up (Mt. Waterman’s base is at just under 7,000-ft. elevation). And once we rounded the bend toward Mt. Waterman, a lovely snow-blanketed hillside greeted us roadside (whew!), along with a mostly empty parking lot and 50-degree temperatures. We seriously could not have asked for better conditions for T’s take two with snow! 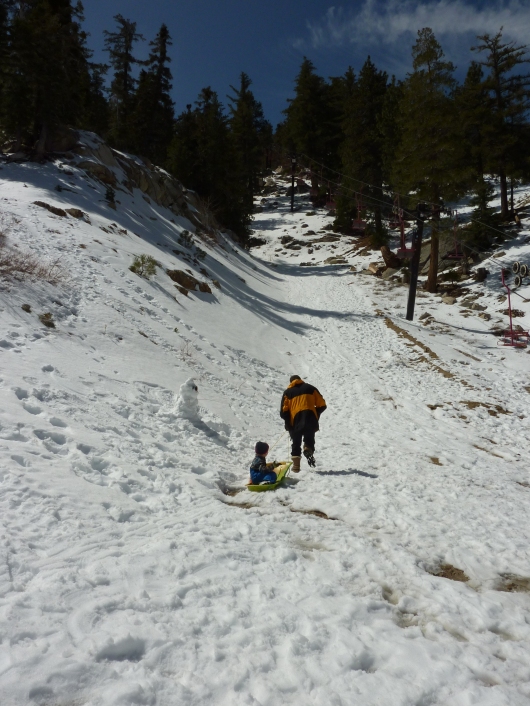 C tows T up the hill at Mt. Waterman for a sled run. 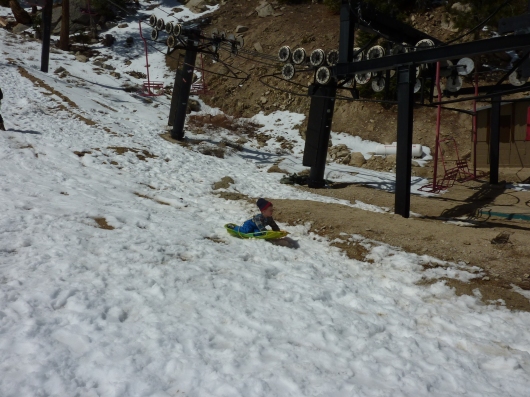 Wa-hoo! Just one of many of T's sled runs down the base hill of Mt. Waterman. 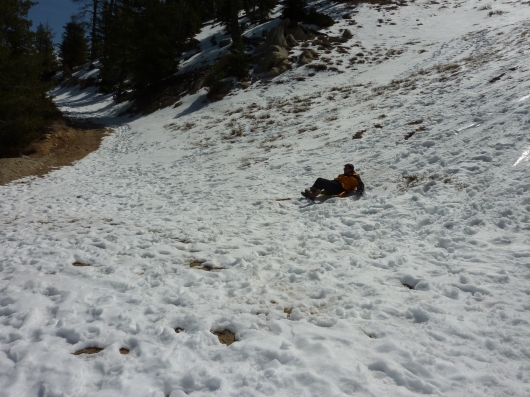 C sleds down a hill at the base of Mt. Waterman. 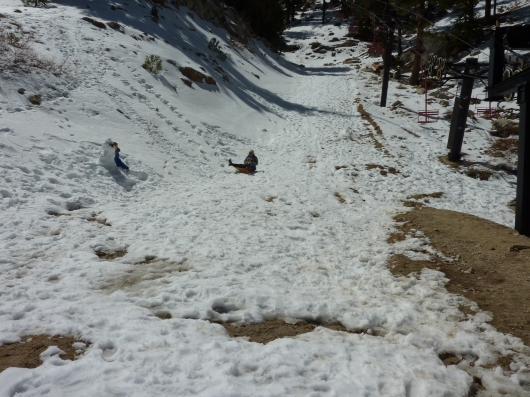 Heck, I even jumped on for a (not-so-graceful) sled run myself! The fun was pretty hard to resist. Thankfully no one was injured during my journey, including me.

Second, we borrowed a sled very last-minute to ensure that we’d have something to do other than a snowball fight, snowman, and snow angels (and again, thanks to D and W for the loaners!). T loved the sled, but then again we knew he’d enjoy this activity based on a dry run (literally) about a month ago. C and I even took our own turns on the sled, which admittedly were nowhere near as solid of runs as T had going down the hill.

T gets into the spirit of the snowball fight at Mt. Waterman. Oh and don't worry... the lifts that you see in the background here and in the other photos were closed, so that's why we all set up our own base camp here. Sadly, due to a lack of natural snow fall (they do not produce snow here), Mt. Waterman hasn't been able to open a ski season for a couple of years now. Maybe next year? 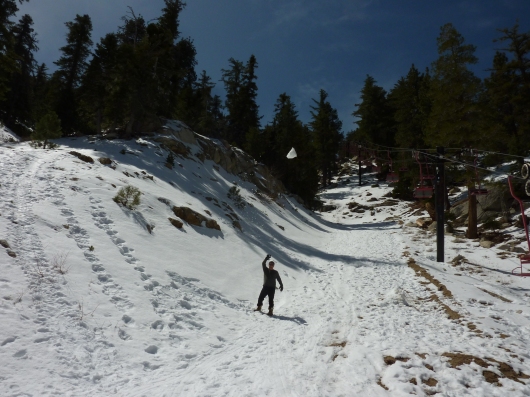 C lobs snowballs in from a distance (yes, that's a snowball in flight toward the center of the photo!).

C readies himself for the snowball war.

Win or lose, C and T had a great time battling it out in this year's snowball war. And look - T's as happy as can be in this icy, white stuff! What a difference three years makes!

T absolutely loves snowballs. Oh and notice he's ditched his jacket? Yes, the weather was that nice. It really was the perfect day for a snow day.

Third, even if we hadn’t found a sled, it quickly became obvious that snowball making and throwing was activity choice numero uno on T’s list. In fact, he loved snowball fights and tossing so much, he could not even put them down while on the sled! We even ran into another family while up on our little adventure and T enticed the boy and his father into a rapid-fire snowball war. Not sure who exactly won that one, but everyone had a great time, and of course that’s all that matters. 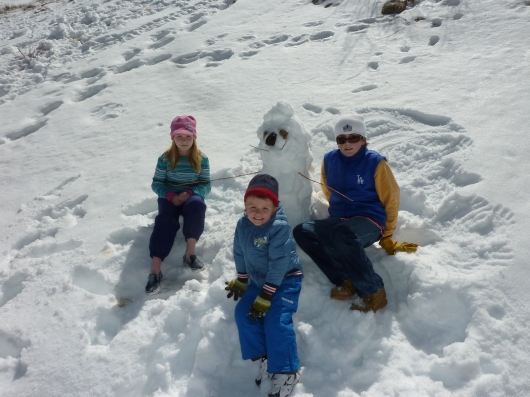 The kids show off the snowman they helped build together (with C's help).

T showing off with more snowballs, with his snowman in the background.

T launches a - yep - snowball at me while I try to get his picture with the snowman.

Finally, the snowman… yeah, he kind of looks like a cat, or a dog, or I’m not sure exactly what, but C and T and the other kids worked with what they found on the ground (sticks, rocks, and pinecones for the most part). Honestly I think it’s pretty perfect. After much persuasion NOT to level the poor snowman with snowballs, T left him standing so he could greet others coming to play for a day in the snow. 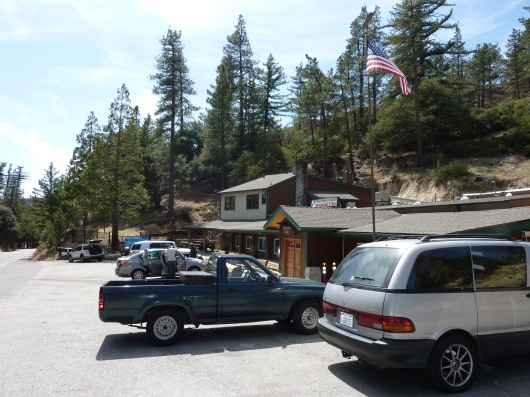 Newcomb's Ranch is a great place to stop along Angeles Crest Highway (CA-2) for a quick bite or beverage. No bikes on this day out, but when the weather warms up a bit this parking lot overflows with dozens of motorcycles, especially on weekends.

The inside of Newcomb's Ranch. Behind the bar in the center of the photo is whom I believe is the hardest working man along Angeles Crest Highway (CA-2). Even if the place wasn't bustling on this weekday, he was running full-speed to ensure his customers were well taken care of. I just wish I'd gotten his name!

After our play date with Mother Nature, we drove back down the hill a few miles for a late-lunch stop at Newcomb’s Ranch. Mostly known as a motorcycle bar by locals, this rustic cabin-style restaurant invites visitors in out of the cold for a warm-up with a meal or snack (or drink). T and I had simple grilled cheese sandwiches, while C had what he’s claimed is the best grilled chicken sandwich he’s ever had, a grilled chicken on sourdough with grilled sweet onions and Ortega chiles – no cheese even! – sided with a cup of their house chili (a hot lunch indeed!). While I’m sure this joint must be slammed on the weekends, again we could not have timed our visit better coming in on a weekday. Plus, we also got to witness probably the hardest working man on the mountain – he was our bartender, server, and busser. We even joked that he was even cooking all of our lunches, and he said, nope, not today (!). We’ll definitely return on our next Snow Day outing.

I declare Snow Day 2012 a sweet, snowy success! Thanks to the other family we ran into at Mt. Waterman for taking one of just a handful of family photos we have from the last year (or two or three)!

So, yes, it’s official: I declare Snow Day 2012 – and T’s second Snow Day – a rousing success! For those of you LA-area RMT’ers looking for a quick and easy day-trip to the snow with the wee ones, head on up to Mt. Waterman soon before it’s too late. In fact, a storm just rolled through yesterday… time to declare your own snow day perhaps?

Go make your own snow angel soon before all the snow is gone for the season!