The view from our seats at the They Might Be Giants family show at UCLA's Royce Hall.

Another milestone moment in our little family: T’s first real concert experience! And what else would it be other than a They Might Be Giants show!

As noted, this year's TMBG family show fell on the same date as their 30th Anniversary Show at UCLA's Royce Hall. Glad we got our tickets early!

Thankfully, TMBG offers a special kids’ concert about once every two years when they amble their way through Los Angeles. When we found out this year’s family show also landed on TMBG’s 30th anniversary tour date later that evening, we made sure to snatch up our tickets sooner than later.

T dancing in the front of the balcony up near our seats for this year's TMBG family show.

Great decision! T recognized many of his favorites right away, starting with the lead-off tune “Meet the Elements” (from the album “Here Comes Science” – you can read a lovely write-up on the album in Wired Underwire here). T danced in his seat and the aisles for the first several songs, but once that waned, C took it up a notch…

Toward the middle at the back of that aisle is C in the white shirt. He's busy escorting T to the front of the crowd at this year's TMBG family show. 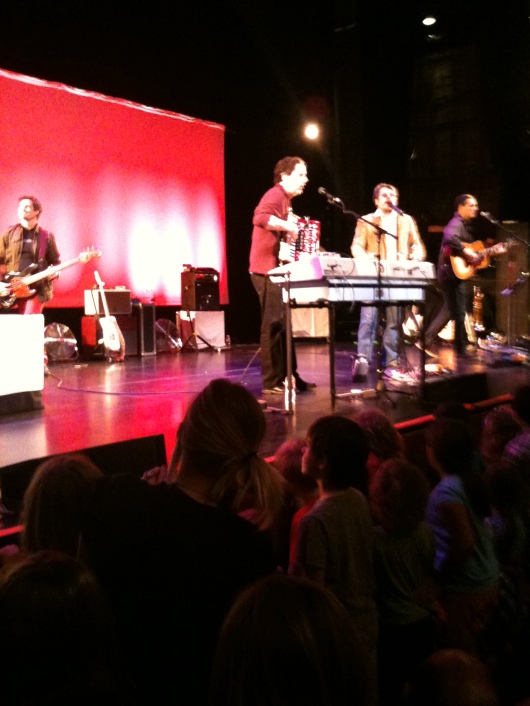 The best photo we could snap with our phones at this year's TMBG family show... T is up against the stage there in front of the other kids out of view.

Yep, that’s C in the white T-shirt down there rushing the stage with T in tow! Can’t say I was surprised since C rushes the stage at pretty much every single concert he attends, especially at a TMBG show. As the saying goes, like father like son. You can’t even see T he’s so up against the stage there (near the boy in the orange T-shirt). Thankfully it was a pretty tame crowd with no trampling or dives witnessed and/or reported, and we could watch T having the time of his life at a close distance.

T and C wait for John F. to hand them some free stickers at the end of this year's TMBG family show.

At the end of the show, John F. and other band members stuck around to hand out stickers to the kids. To say we got our fair share would be an understatement. Thankfully, T has a few friends he can share them with, but only if he wants to I suppose. After all, T did get all of his stickers directly from John F.

Here’s some more photos from our TMBG-tastic afternoon out with a complete set list at the end. Just remember RMT’ers… the family that rocks together, well, rocks!

Heading up Janss Steps at UCLA toward Royce Hall, this year's venue for the TMBG family show.

T burning off some energy before we head into the TMBG family show at UCLA's Royce Hall.

There was an a capella festival going on at UCLA, so groups were all over the quad outside of Royce Hall warming up. This was the group from Cal Poly San Luis Obispo singing "California Gurls" by Katy Perry. Not really the same genre as TMBG but entertaining nonetheless. 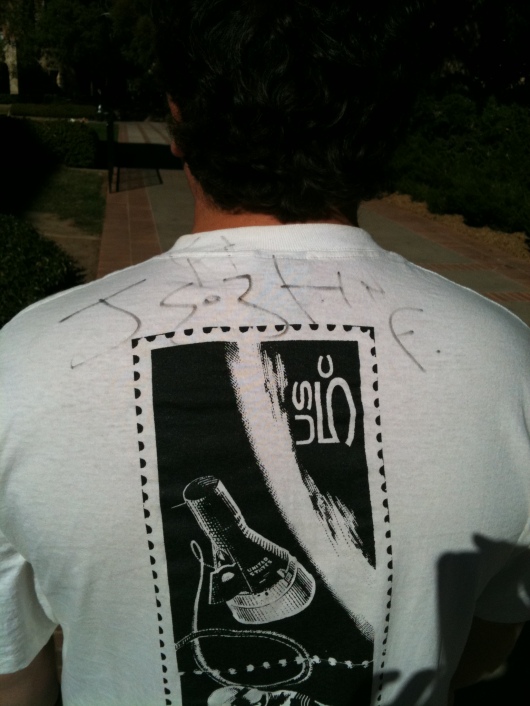 C wore his beloved autographed TMBG concert shirt (circa 1991) to this year's family show, which is just one of many from his collection. He got several compliments from other parents who, like us, are lifelong fans doing their due-diligence by passing the tradition down to the next generation.

For the parents only... the pre-show bar out on the patio at Royce Hall before this year's TMBG family show. 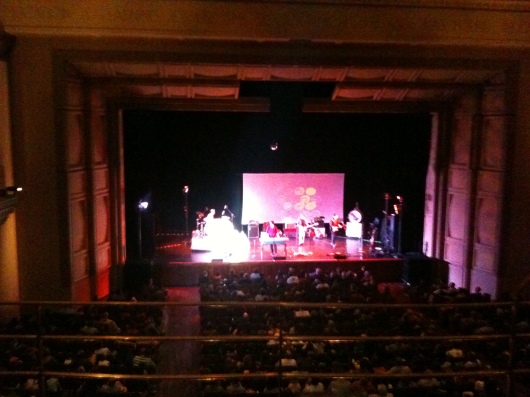 Another view from our official seats at this year's TMBG family show.

The Avatars at this year's TMBG family show.

After we all got up close to the stage at the TMBG family show. Much better views from there!

After the show let out, all the kids went straight for the fountain. Notice the amount of kids walking the wall along the fountain's edges. Yeah, probably not the safest thing ever, but again no reports of injuries (or diving in). 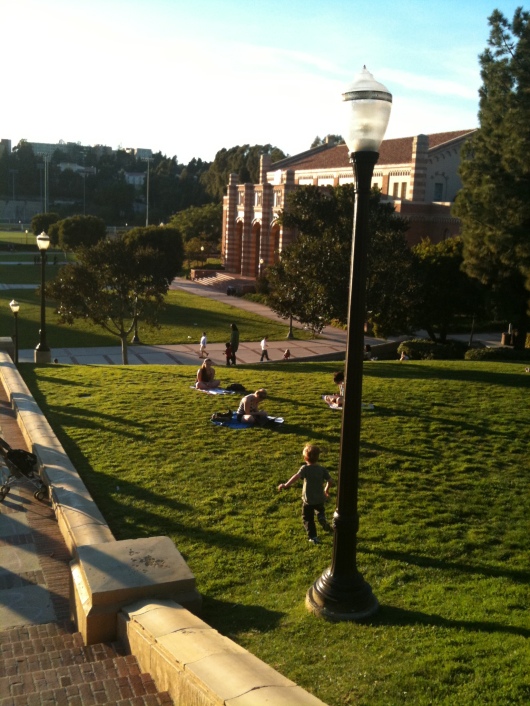 So long for this year, TMBG!

Set List – They Might Be Giants – Family Show – UCLA – January 28, 2012:
Meet the Elements
E Eats Everything
No!
Nonagon
Theme from Malcolm in the Middle
Me! (Short, funny, one-word note)
I Am a Paleontologist
Pirate Girls Nine
Dr. Worm
Clap Your Hands
Kitten vs. Ape (Crowd Chant)
Particle Man
Apartment Four
In the Middle, In the Middle, In the Middle (w Robin)
Four of Two
Avatars: Shoehorn With Teeth
Why Does the Sun Shine?
High Five!
Birdhouse in Your Soul
Seven Days of the Week OR I Never Go to Work (This when I was running from balcony downstairs, whoops)

2 responses to “They Might Be Giants’ Family Show Definitely Rocked!”