Last weekend C, T, and I joined about 25 of our friends for our family’s first outing to Disney’s El Capitan Theatre in Hollywood, CA! 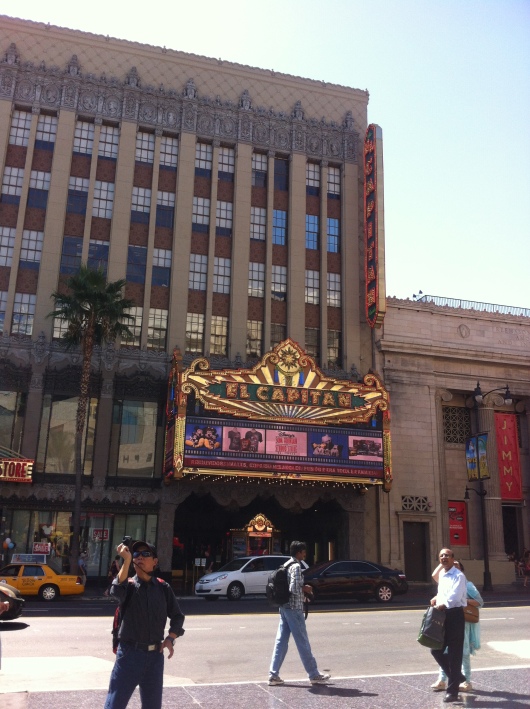 A view of Disney’s El Capitan Theatre’s marquee from across the street at Hollywood and Highland.

T with Uncle Z outside of the El Capitan Theatre in 2011.

T waiting in line for his first El Capitan experience with Aunt M in November 2011.

My son, the VIP at the El Capitan Theatre with his Aunt M. This was T’s first time at the historic venue in November 2011, and he loved it!

This wasn’t T’s debut at the El Capitan, however. About two years ago, his aunt and uncle gave him an awesome 4th birthday present of VIP tickets for a showing of The Muppets. He absolutely loved it, the outing and the movie both. Oh, and the special commemorative tub of popcorn he got with his VIP seat also. He still uses it as a “treasure chest” today! 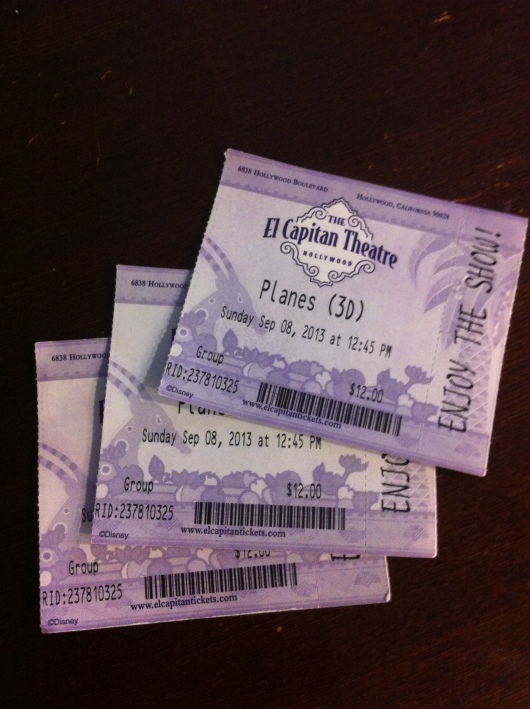 T’s just before seeing Planes at the historic El Capitan Theatre! Despite this poster’s dates, Planes closed yesterday (September 12), one week earlier than its projected run. 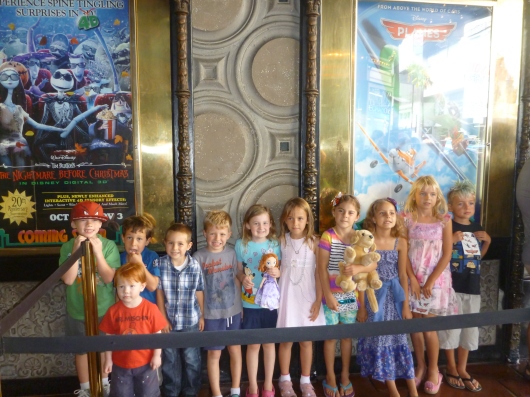 Just a few of the kids in our group before the movie Planes at the El Capitan Theatre. 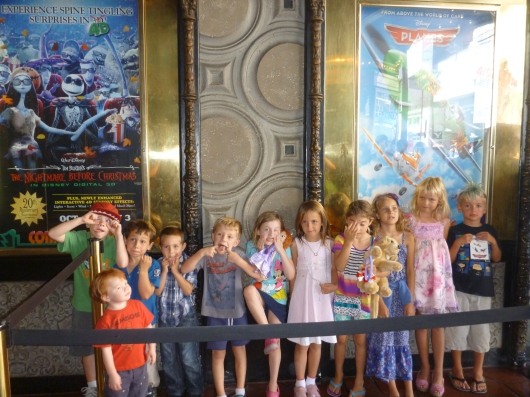 The “crazy face” shot of the kids before the movie (of course).

This time, we didn’t set T up with VIP, but we did get in on a great group rate thanks to a friend who organized a group of about 30 of us to go see Planes in 3D. For groups of 20 or more, you can purchase a bulk set of general admission tickets in advance at $12 per seat, which is a discount per ticket from the regular general admission ($16 for adults; $13 for kids 3-11 and seniors 60+) and VIP rates ($26). You can get more information on how to get group tickets here. Click here to compare all the different levels of ticketing, including the VIP rate that includes a reserved seat, bucket of popcorn, and a drink. 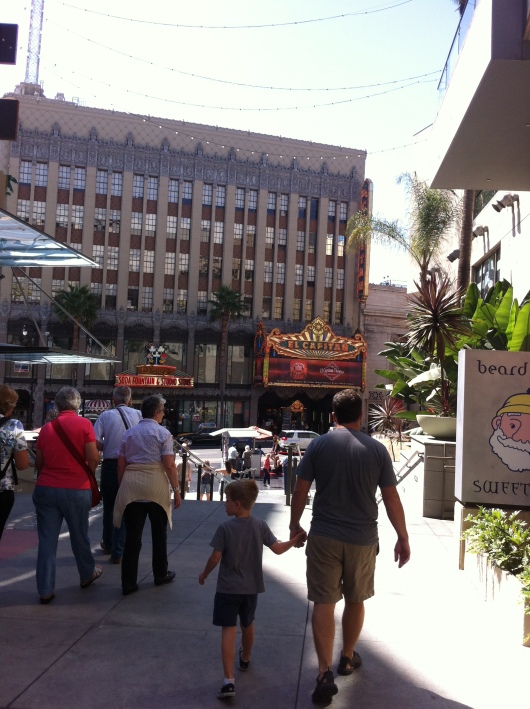 T and C walking down from Hollywood and Highland (where we parked) toward the El Capitan, which is across the street from the mall.

Smiley boys across the street and in front of the El Capitan Theatre, just before C’s first time there!

Semi-candid family shot while we waited in line outside of the El Capitan Theatre.

A more posed family shot while at our first family outing to the El Capitan Theatre!

I was surprised that having grown up in the Los Angeles area that C had never been to the El Capitan. But I learned a lot about the theatre’s history on this trip from a friend attending with us. It turns out that the theatre had changed hands a few times through the years since its opening in 1926, and it even sat empty for a time of it during our childhood years. It wasn’t until Disney purchased the building in 1989 and began a historic two-year archeological and museum-quality restoration that it was able to reopen in all its original glory in June 1991. Yep, C was well into college by that year, so it makes sense why it wasn’t something he grew up doing. You can read more here for a more thorough write-up on the El Capitan’s history.

More of the ceiling alcove that covers the outer entrance of the El Capitan Theatre. 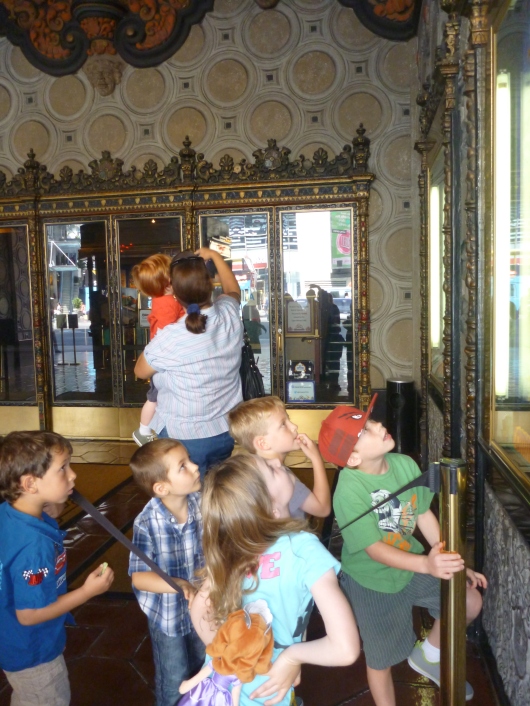 The kids even took in and appreciated some of the El Capitan’s gorgeousness. 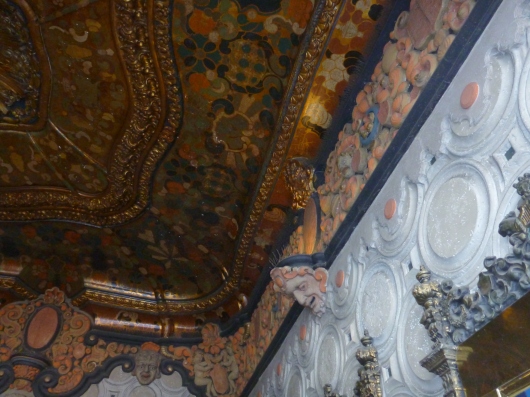 Beautiful carvings and other artwork adorn the outside of the El Capitan Theatre.

The kids peeking into the box office and at ads for future movies coming soon to the El Capitan Theatre.

The theatre is gorgeous… well, what we saw of it anyway. I very much wanted to go and explore the “museum” areas down below, but sadly at the end of our movie, the theatre manager came in interrupting the end-credits as there was some sort of “police action” outside near Hollywood and Highland (which happens to be directly across the street from the El Capitan and where we’d parked). He urged us to proceed quickly to our cars and exit the area. Don’t worry, we did just as we were directed as he seemed quite serious, but what a bummer to have missed such a key part of the outing. Note: The police action was nothing more than a small protest on a corner sidewalk with some patrol cars parked at the ready in case things got out of hand (which they didn’t, whew!). 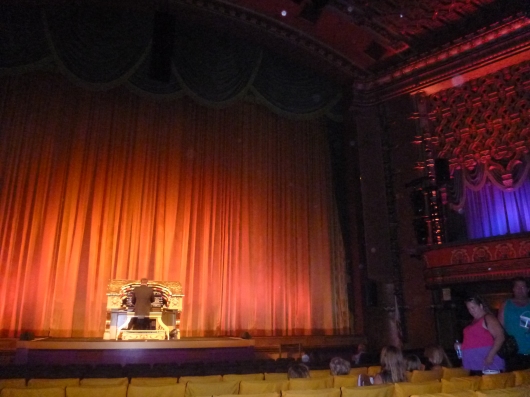 Organist Rob Richards played upbeat Disney tunes for the crowd before the movie Planes last Sunday at the El Capitan Theatre, just as he does and has daily for years.

But despite missing out on seeing some of the older history and relics from the theatre’s heyday, much of the El Capitan’s history lives on also through its live performances pre-show, including the house organist on stage before every single movie screening. Rob Richards is an award-winning organist that does the venue proud every few hours of every day at the El Capitan. His work has been recognized and critically acclaimed over the years, including being named the 2005 Organist of the Year by the American Theatre Organ Society. It’s also pretty fun for the kids to enter the theatre to live music (mostly Disney numbers from their movies over the years, so recognizable), and for us parents to have that entertainment holding them over before the movie starts. Beats a commercial reel any day in my book, RMT’ers!

Dakota the Bald Eagle swooped in with the Wildlife Learning Center along with a few other feathered friends before the Planes screening at the El Capitan Theatre.

We also were kept educated and entertained by a live show from the Wildlife Learning Center – yes, the same folks I blogged about from the Long Beach Public Library free family summer series! The El Capitan regularly schedules a short, live show before the movie that loosely relates to the upcoming film. In this case, the Wildlife Learning Center put on a wonderful show about birds, flight, and aerodynamics. They showcased a variety of their feathered friends and explained the way that the birds’ wings and flight patterns compared to a variety of aircraft, including a direct correlation of each bird to one of the characters in the Planes movie!

T getting ready for a 3D showing of Planes at the El Capitan Theatre!

The movie’s on… this is when I put the phone away, RMT’ers.

OK so you’re probably wondering… how was the movie, K?! Planes was really cute. Simple, yet heartfelt and funny, very much like the original Cars movie (in fact, a LOT like the original Cars movie, but that’s OK; I expected as much). Kids and adults both enjoyed it also, so it’s a great one for the entire family. We had three-year-olds in our group, too, and it was entirely age-appropriate.

The kids getting their 3D glasses pre-show at the El Capitan Theatre. 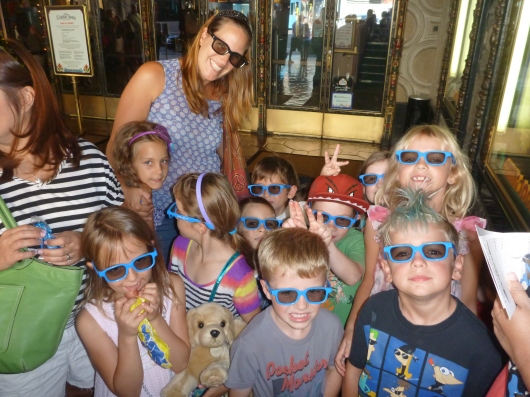 T with his best buddy from Grandma S and Grandpa F’s neighborhood at the El Capitan Theatre. 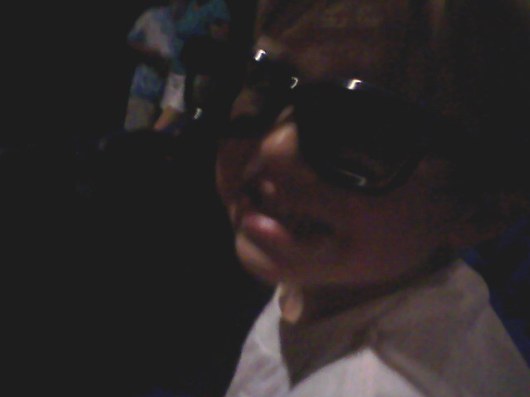 On September 27, 2010, it not only reached 113 degrees in Los Angeles but it was closing in on 116 degrees in Huntington Beach where I tried taking T to his first 3D movie. Don’t remember much of the movie, but we sure stayed cool!

And most of the kids even kept their 3D glasses on the entire time, which is no small feat either! Planes also was a great movie to have seen in 3D format; all of the flight and racing translated to that media extremely well. I am glad that we’d chosen it as T’s first real 3D movie outing. He and I had tried one before, but it was under duress during the hottest day on record in Los Angeles ever about three years ago when T was just shy of three years old. Yeah, that was a parenting fail trying to keep 3D glasses on the face of a 2-1/2-year-old (duh) and taking a toddler to a 3D movie in the first place (double-duh).

Just a few extra shots of the kids at the El Capitan Theatre. 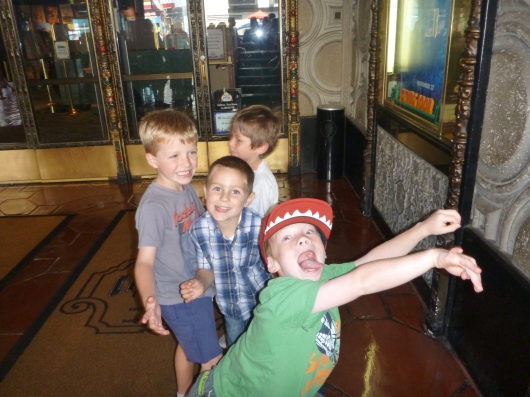 The waiting is the hardest part, especially for the parents (dads) being pestered by a gaggle of boys!

I encourage families living in or visiting the Los Angeles area to go see a movie at the El Capitan Theatre at least once while the little ones are still into kids’ movies, and especially if they are into Disney flicks. I am not a huge Disney nut, but this was a fun way to see a movie that we were planning to take T to see anyway, and C and I both appreciated the historic story behind the venue. We made it a special event with friends that T can remember always also. Fair warning though: The theatre does get crowded at times, especially during the earlier dates of a movie’s run. I would suggest either making an outing of it and purchasing advance tickets and/or attending a more popular movie toward the end of the run for a better choice of seats.

You can find any and all information about the El Capitan Theatre that I didn’t cover directly on their website including directions and parking information. Opening today (Friday September 13, 2013) is a limited run of The Little Mermaid, some screenings which include Disney’s “Second Screen” experience.