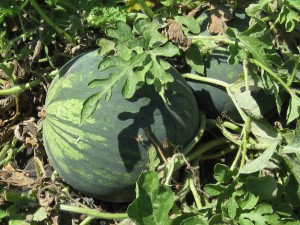 Check out what's growing down on Tanaka Farms this summer! Oh and thanks for the photo, Mom 🙂

Last week T and I (and Grandma, and Dad, too!) went down to the farm for one of our favorite seasonal outings together: watermelon picking.

Tanaka Farms (http://www.tanakafarms.com/ ) is a fourth-generation, family owned-and-operated organic farm (no pesticides) in Irvine, CA. Irvine was in the heart of what was once a burgeoning agricultural center of Southern California back in the day (Orange County didn’t get its name from real estate, people), so it’s nice to see that despite all the development and growth that has come in as the farms have gone out, Tanaka Farms continues to stay open to serve those of us who want: one, a farm locally to take the kiddos to explore and taste what farm-fresh fare truly is, and; two, a local avenue in which to buy a bountiful, seasonal, Community-Supported Agricultural (CSA) box-o-goodies.

A Bounty of Veggies Year-Round at Tanaka Farms (photo courtesy of my pal, Ambyr)

Yes, not only is Tanaka Farms a working farm but it’s a supplier of one of the larger CSA programs in North Orange County and into the Southern Coastal Los Angeles County area. While Tanaka Farms sells CSA boxes directly, they also run a fundraising program via several local schools, churches, and the like, and those groups then net back a percentage of each sale depending on total number of boxes sold. Tanaka Farms in turn coordinates central drop-off points weekly via the groups participating in the fundraising programs (usually the schools or churches themselves, which makes it easy and convenient). Our family cooperative (fancy term for local play group that T and I belong) was a part of the Tanaka CSA program for a time of it, and our raised monies went toward various celebrations with the group, picnics, field trips, and other charitable ventures. It was a nice win-win: involved families got to try new, fresh, seasonal foods – and introduce new foods to their kids – all while giving back to the community simultaneously.

The four seasonal wagon ride-and-pick tours in which Tanaka Farms is known for most are: watermelons (July and August); pumpkin patch (fall September and October); strawberry season (March through June, though this year this one went well into summer; in fact, there were still rows and rows of strawberries as far as we could see from our wagon ride last week!); and Christmas trees (November and December). The best part about the wagon ride is that the farmers stop along the way out to the seasonal end-destination and hand out freshly picked (that day) crops to sample. Last week’s samplings included fresh corn, tomatoes, cantaloupe, carrots, zucchini (yellow and green), cucumbers, and two varieties of watermelon (red and yellow, but we also learned there are more than 1000 varieties of watermelon – who knew?!).

Wandering through the rows of crops at Tanaka Farms (photo courtesy of my pal, Ambyr)

Pricing for Tanaka Farms’ wagon ride-and-pick tours depends on the seasonal event, and additionally group rates will vary depending on the number of adults and kids you can gather together for a tour. In my experience now having attended three watermelon picks, two pumpkin patch rides, and two strawberry picks (and a partridge in a pear tree – well, not yet, but I’m still waiting for the advertising on that ride-and-pick tour) over the last three years or so, it seems that if you can fill at least half of the space of their two-cart tractor wagon ride with about 50-50 kids and parents, you can qualify for the group rate, but definitely call them up to secure more details and booking info.

Kids got to take home a fresh-picked watermelon (or cantaloupe)! (thanks for the photo, Nicole!)