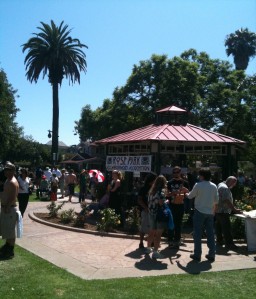 Last weekend our family walked about three blocks from our house to partake in our neighborhood’s first annual bluegrass festival. I’ll be the first to admit: I had no idea what to expect, either musically or crowd-wise. All I knew going in was that it was free and literally down the street from our house (as in we could look down a few blocks and see it going on). But honestly, I was drawing a total blank as to what style of music bluegrass was – other than possibly originating from somewhere near the Bluegrass state of Kentucky. 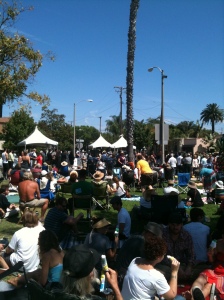 The crowd soaks up the sun and song at the First Annual Rose Park Bluegrass Festival 2011.

Turns out I was somewhat right. Bluegrass music is a mix of jazzy, country-style music that comes from Appalachia, so it’s a national pastime to the core. You might be thinking, bluegrass in Southern California, really? But you know, it’s the perfect kind of music to feature for a free daytime family festival like this was, even for us Left Coasters. It’s full of history, clean lyrics, and upbeat, catchy melodies. And as it turns out from seeing the crowd this first annual event pulled, there appears to be quite an active bluegrass community right here in Southern California (one of the band’s names was Signal Hill Billys, named for the nearby town Signal Hill; now that’s pure genius). 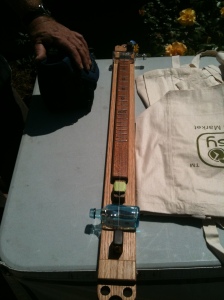 During the afternoon, we got to see folks mingling through the crowd plucking on instruments fashioned out of household scraps, from a two-by-four, a string, and a couple of empty jigger bottles fashioned into a homemade slide guitar, to a banjo made up from an old cigar box, a stick of wood, and some strings. OK, so those might not completely family-oriented examples, but it’s all pretty creative nonetheless. The festival brought in some local businesses from food vendors to clothing and jewelry sellers (yay for local economy!). We got to take home some reusable bags for free (which come in quite handy now that our city has an ordinance banning single-use plastic bags and now charges for paper sacks – thanks Fresh & Easy!), and we scored some free Ben and Jerry’s ice cream from Ice Cream Man. T even got to climb in and throw around some hay in a huge haystack that I guess was just dropped off for such activities. The kids were having a blast, so if the hay was meant for something else, oops, no one told them! 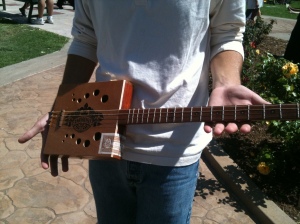 A bluegrass fan lights up some tunes on his homemade banjo made from an old cigar box (Rose Park Bluegrass Festival 2011).

The best part of the afternoon though had to have been T’s interest in the music itself. He literally walked up to the front of the stage, found a hay bale, and sat and listened to a few songs in a row – and boy, oh boy, did he listen intently! Safe to say T was mesmerized. I wasn’t that surprised at his reaction in that after listening for a little while, I realized that T had some exposure to this style of music; in reading up some, I’ve come to learn that many of the old “railroad songs” (i.e., John Henry) that T’s heard, sung, played along with, and danced to oh so many times before fall into the bluegrass genre. For all this we can thank both Tony Saletan and Charlie Cox – LA’s premier street musician – for T’s little bluegrass habit.

T enjoys some of the set from Lonesome Otis at the First Annual Rose Park Bluegrass Festival 2011.

We are looking forward to our ‘hood’s second annual bluegrass festival next summer. In the meantime when we need our fix, we’ve heard that every Saturday night our local Me-N-Ed’s pizzeria hosts live bluegrass music. It’s been on our long-term to-do list for a while, but I think it’s been promoted to our short-list for a Saturday night out real soon. Pizza and bluegrass, together at last – well, in Southern California at least!