Now what set of posts about a vacation on the Big Island would be complete without an entire post devoted to one of Hawaii’s favorite past-times: Snorkeling.

T loves snorkeling about as much as C and I do, and that’s fantastic!

A family who snorkels together makes some fantastic vacation memories together!

C and I have always loved snorkeling. It’s an activity that we knew would become a family hobby once we had kid(s). Finally, the day has arrived where we can snorkel alongside T. We love snorkeling as a family. We started up together as a family “for real” last year while T was still learning to swim, but he was finally strong enough in the water to be with us in a controlled snorkeling environment.

C takes T into the shallows of the Hilton Waikoloa Village’s lagoon (Spring 2012). This is facing southeast and is a common view from its lagoon sand beach area. We started T out snorkeling by having him inside of a floatie ring where he could still touch bottom. It was a perfect way (and place) to introduce the hobby to a four-year-old. It helps that the Hilton’s lagoon is a real-life aquarium, teeming with sea life of all varieties at all times of the year. 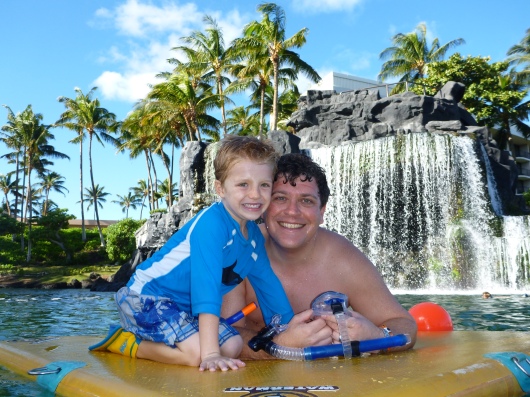 My boys on a snorkeling break on the “rest raft” in the Hilton Waikoloa’s lagoon.

C and T head out on a snorkeling adventure in the Hilton Waikoloa Village’s lagoon. 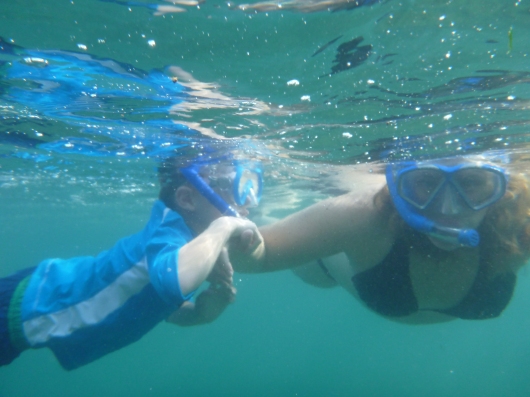 T and I snorkeling on the Big Island at the Hilton Waikoloa Village Resort’s lagoon.

Last spring (2012), we would take T out snorkeling in a floatie ring out in the lagoon at the Hilton Waikoloa Village Resort where the waters are calm and clear and (compared to other local snorkeling spots) extremely shallow, mostly sandy-bottomed where you can touch, and close to shore at all times. It is the perfect introduction snorkeling spot for a four-year-old and any first-timer. T became more encouraged after that trip to the Big Island to improve his swimming further so he could return next time and make a go of it again (which is why we are thankful for the success of not just the snorkeling outing several months ago but thankful for the success of his swim lessons that came in the months following that spring vacation and preceding this winter one). 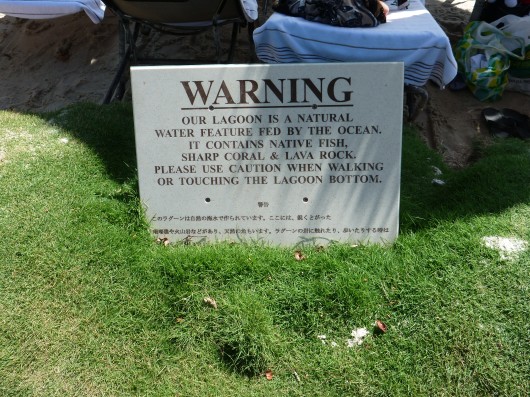 The Hilton Waikoloa Village’s lagoon is a real open-ocean snorkeling spot on the Big Island. Don’t let the calm, clear waters trick you even during the winter swell! 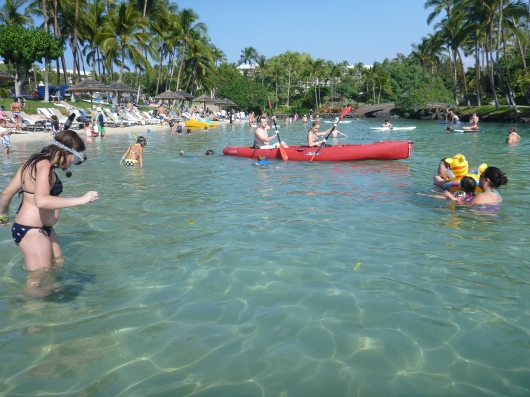 A view north in the Hilton Waikoloa’s lagoon. Yes, it’ busy in the winter with everything from snorkelers to kayakers. Be careful out there!

Another view north from over near the waterfall area of the Hilton Waikoloa’s lagoon.

A quieter area of the Hilton Waikoloa’s lagoon (facing west).

I’m T, and I approve of snorkeling!

During this latest trip to the Big Island, we snorkeled again… a lot. This time T was out there with C and I, completely ring-less and loving it. We sometimes brought a kick-board along with us just in case he needed a place to “rest” while out in the water, but we really only used that when we wanted to navigate him with us to another viewing spot across the lagoon. He really never got super-tired (or tired before we were ready to go back anyway), and he loved every second of it. Hearing T shout “TURTLE!” and “FISH!” was enough for C and I to know that the love of snorkeling was taking hold. Awesome. 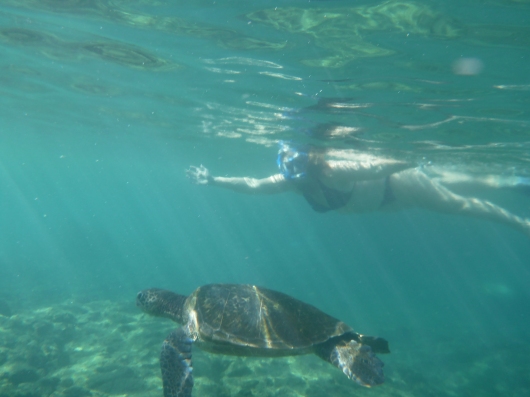 Speaking of awesome, let me show you some of the awesome sea creatures we saw on this vacation (December 2012-January 2013). I give the dates because I have no idea if any of these sightings are seasonal. I say that because we saw animals on this trip that we’d not seen during our last two spring vacations in the exact same snorkeling spot, the lagoon at the Hilton Waikoloa Village Resort. We thought we’d get to snorkel again up at Mile Marker 69, but we quickly learned that winter swell pretty much prevents that from happening Anyway, if anyone knows more about what you see on this post, please do tell. I’d love to learn more about what we photographed, including if I have all these animals named correctly!

A parrotfish (I think?) and some convict tang in the Hilton Waikoloa lagoon.

Mullet fish, I think. These would school in very shallow waters near the surface over the sandy bottom of the Hilton Waikoloa’s lagoon. We would follow them in knee-deep (sometimes even more shallow) waters on foot until they’d regroup, turn, and head back the other direction.

If anyone knows what this is, please share. Despite consulting numerous Hawaiian fish ID cards, websites, etc., I still cannot settle on a species!

I had a heckuva time narrowing down just what photos to share with you all. We saw sea turtles, needlefish, tang, various butterflyfish, several moray eels, parrotfish, puffers, reef triggerfish (yes, the official state fish of Hawaii, but please don’t ask me to spell it in its local tongue!), bluefin trevally, goatfish, and mullet, just to name the ones I actually know the names of (thanks specifically to this website image for helping with primary identification assistance)! I first culled to around 60 pictures out of, oh I don’t know, literally hundreds. No, I am not kidding. We got this new underwater camera, and we kind of went nuts with it. We went with the “blind pig finds an acorn” photography theory/approach on the inaugural outings with said new camera, so I’m sure even these “great shots” aren’t as great as the ones we’ll get in the future. Practice does help with photography, so I am guessing that goes about 10 times over for underwater photography, especially while actively snorkeling with a five-year-old in tow.

Have you seen the light and discovered the beauty and awesomeness that is snorkeling, RMT’ers?

So along with what I’ve already posted above, below are my Top 12 Snorkeling Shots from the Big Island, in no particular order. I went with 12 because that’s about how many creatures I could ID with any level of certainty. Enjoy! 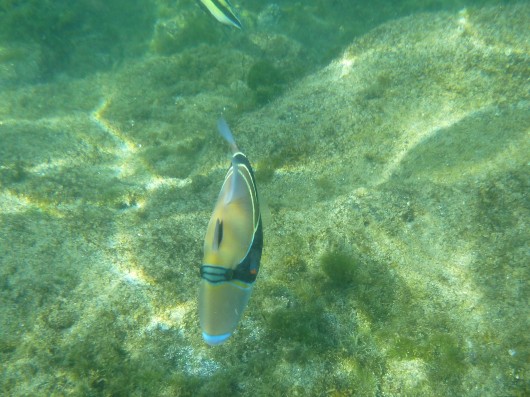 Here he is… the Humuhumunukunukuapuaa. AKA, Reef Triggerfish, the state fish of Hawaii. There will be a spelling test later, RMT’ers.

A’ha, or more commonly known as a Needlefish. 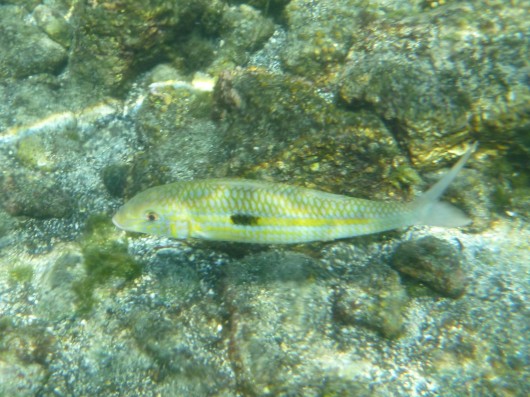 Spotted Pufferfish. I don’t know exactly which one this is though. There were a few different kinds that we saw. 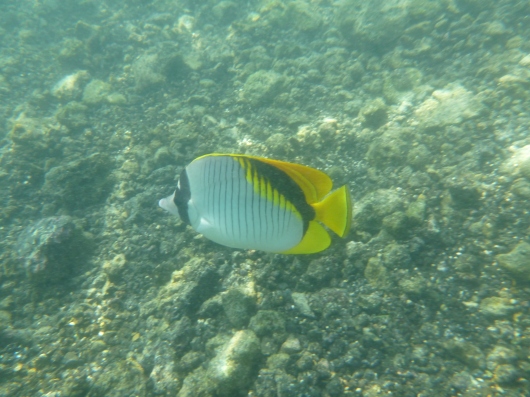 Butterflyfish. There are several kinds, and I still cannot figure out which one this is exactly. 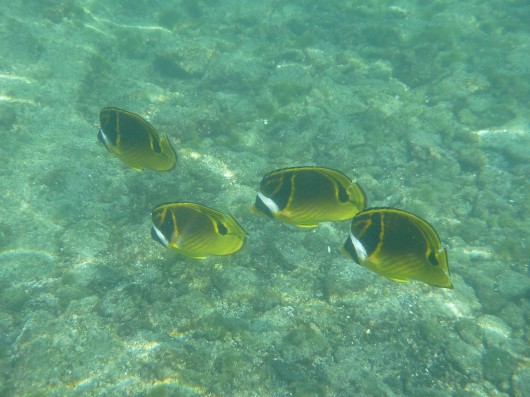 Raccoon Butterflyfish (I think these are raccoons anyway?). 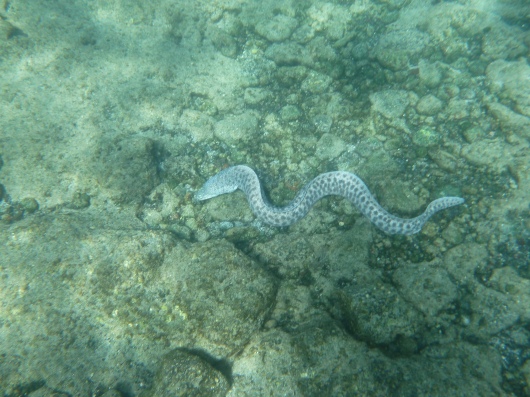 Moray Eel. It’s hard to tell if this is one of the Leopard varieties or not, but it definitely has spots, not stripes like the Zebra Moray. 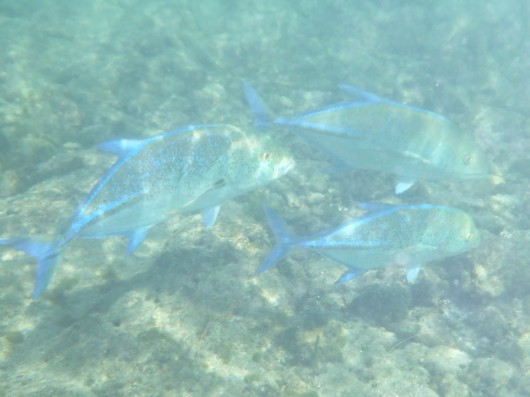 Close-up of a Sea Turtle. Yes, the Sea Turtle gets two spots in the Top 10 because they are super-special… and we got a LOT of pictures of Sea Turtles.

If you are interested in learning about other animal residents of the Big Island of Hawaii, check out this post from Spring 2012.