A game of Chicken Cha Cha Cha in progress. This is our latest addition to T’s ever-growing board game collection, but this one will be a keeper for years’ to come (yay)!

Kids’ board games just, well, are starting to kind-of bore me (C, too). They typically follow this usual canned formula: Spin a spinner (or take a card); then move around the board wherever you’re told to go; and finally do whatever else the game tells you to do next. I’ve always found it ironic that when playing these sorts of games that the game pieces are called pawns and are supposed to represent us and our role inside of the game. Coincidence? Check. 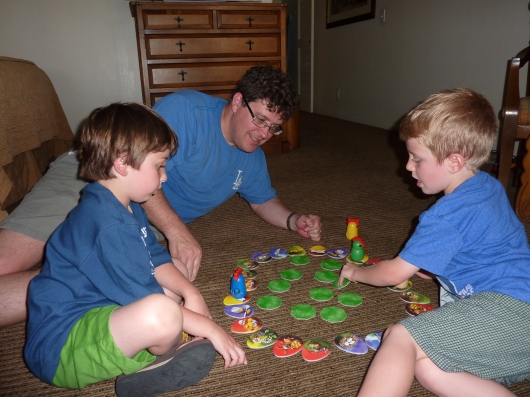 No bird brains in this bunch! T, his dad, and his buddy play Chicken Cha Cha Cha in the hotel room while waiting out the mid-day sun a couple of weekends ago while on mini-vacation.

Sure, T is happy playing pretty much any kind of game set up in front of him because, simply put, he loves board games. We also get together at least one night a week to play a game or two together as a family. We have your typical Candy Land-like, do-what-it-says-to-do games (along with Candy Land itself), and we also own a healthy mix of bingo-style card-and-marker games. The former style of game was a perfect introduction for T at age three in that it got him used to taking turns, turning over cards, and counting spaces forward and backward, all great things to start teaching to a preschooler (social and fine motor skills). The latter type of game was and still is great for testing mental reflexes in letter and number recognition and serve as wonderful first steps toward reading. All of these games have their benefits as noted, and I in no way wish to discount them for what they are. However, now that T is almost five-years-old, we’re now looking to take our gaming experiences to the next level. 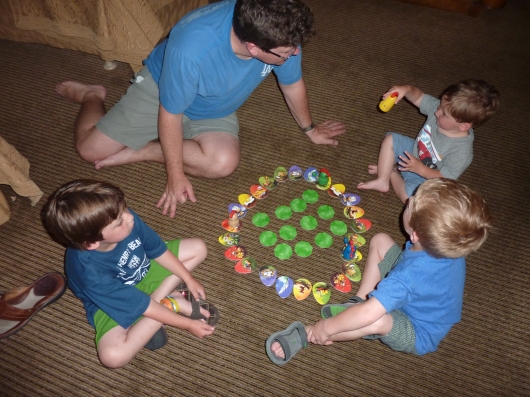 Even the youngest kid can learn to play Chicken Cha Cha Cha. OK, maybe not the toddler in the upper-right of the photo, but he got a kick out of the wooden chicken game pieces, so the bigger boys let him play with the spare sans wooden tail feather while they played the game.

In truth, there just are not many board games for the youngest gamers in the family that actually test their developmental and strategic abilities other than the classic memory or concentration card matching games. Heck, even those memory games start to wear on our minds after we’ve made one match too many, right, RMT’ers (that and they’re not so strategic either)? But at least memory games are played by the players, versus the game playing them, and C and I can appreciate that objective, however repetitive it might get.

T turns over the “soft boiled egg” memory card during a game of Chicken Cha Cha Cha. If you look closely at the game path around the memory cards, the egg piece in front of T’s chicken is a match, so he can move forward in the game and go again.

So when we discovered Chicken Cha Cha Cha at our friends’ home while visiting Northern California last February, we were immediately mesmerized. This game is fashioned around a concentration-style card game concept in that the more that you can remember, not just from your turn but from paying attention during ALL of the players’ turns, the better at the game you will perform and the faster and more likely that you can win. However, while it is similar to how one collects up matches in your typical memory game, it’s twist is that you aren’t physically picking up the cards but rather you are forced to recall the matches in a sequence by using your short-term memory banks and you continue to use your new-found knowledge as the game progresses.

How it works: Players choose a colored wooden chicken with a removable tail as their game piece. Twelve octagonal-shaped cards are shuffled and then placed in a grid in the middle of the playing area face-down, and 24 egg-shaped cards are shuffled and placed one-by-one around the octagonal cards, creating a circular path face-up (the egg pieces are the same 12 memory card images, times two). Players set up their chicken pieces evenly-spaced along the egg path depending on the number of players, and the youngest player always goes first.

Players take their turn by turning over one of the center cards; if the card matches the image on the egg-shaped  card directly in front of them along the game path, they move their wooden chicken forward and go again. Players continue consecutive turns as long as they continue to match octagonal pieces with egg pieces; if they do not make a match, it’s the next player’s turn. Should a player come up behind an opponent’s chicken on the egg in front of them, then they then look for the match on the egg directly in front of the opponent chicken; if they make that match, then they jump over the other chicken and take its tail feather. The game continues in this manner, with mental matchmaking, chicken-jumping, tail-taking, and so on. The player who gets all of the chicken feathers first (and holds them all at the same time) wins the game.

Follow all of that? If not no worries, it’s really easy to learn, I promise. I tried to take photos herein of a few of the different phases of the game to show you how it works also. And further proof of just how easy one can pick it up: T understands how the game works so well that he’s our reigning household Chicken Cha Cha Cha champion. That’s nothing to bok at, RMT’ers!

However, finding and buying Chicken Cha Cha Cha proved to be a challenging game in itself. Turns out, the game originates from Germany (as Zicke Zacke Hühnerkacke), and its English-language version by Rio Grande Games is currently out-of-print (a reprint was expected in February 2012 according to their website but it’s still pending). Despite that obstacle, C accepted the challenge and went on a mission to get this board game for our Father’s Day weekend out in the desert so we’d have something to do during  indoors during the hottest times of the day. Thanks to an online gamers’ forum, C found a user with the German version new in box that just happened to come with an English and other language instruction booklet f0r $44 when all said-done, so not “cheep” if you compare it to your standard preschooler game choices; then again, this game will last well beyond the preschool years so we felt the money was well worth it. Oh, by the way, no reading is required for the actual playing of the game, so it really didn’t matter what instructions came with it since we already knew how to play from visiting with our friends.

C turns over T’s favorite Chicken Cha Cha Cha memory card: Chicken poop! Not that it needs to be said after that comment, but this board game is rated appropriate for ages four-and-up.

Chicken Cha Cha Cha is rated for ages four-and-up, two-to-four players, and lasts about 15-20 minutes per game round. We’ve found all of these ratings to be appropriately assigned, and we’ve found that it’s most fun to play with four chickens in the coop, not to mention it gives players more feathers to go after, too!

Have a cha-cha-cha-rific weekend, RMT’ers!