Happy Monday RMT’ers… or not perhaps. I realize that Mondays always seem to be hit-or-miss, especially with kids, and especially during the summer months (wowzers). Well, what if I told you (or reminded some of you) there was a standing FREE activity every Monday morning that you could attend without fail that is sure to get your family’s week started off on the right foot? 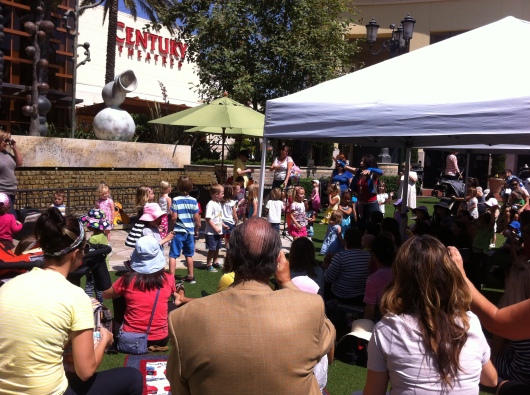 This May, Bella Terra Kids’ Club kicked off its 8th year in Huntington Beach at the mall of the same name. T and I have been attending shows and performances here since he was just over two-years-old, and we would have started going earlier had we known about it (we’ve seen babies there as young as two months!). Acts vary from musicians to magicians and anything you can think of in between that’d be entertaining to a young child. All shows are for all-ages (though I recommend it best for children under eight-years-old), and admission is always free. You can see some photos of T’s time here through the years in today’s post, and you can read some of my previous blog posts about our attendance at Bella Terra here. 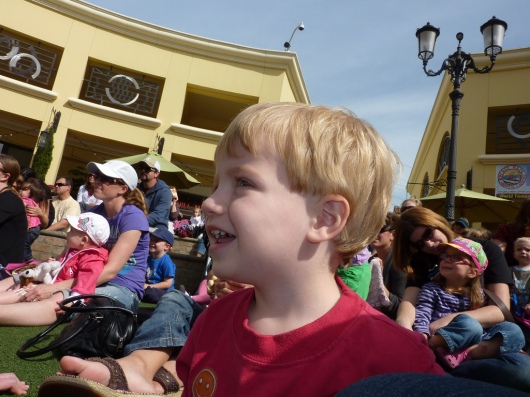 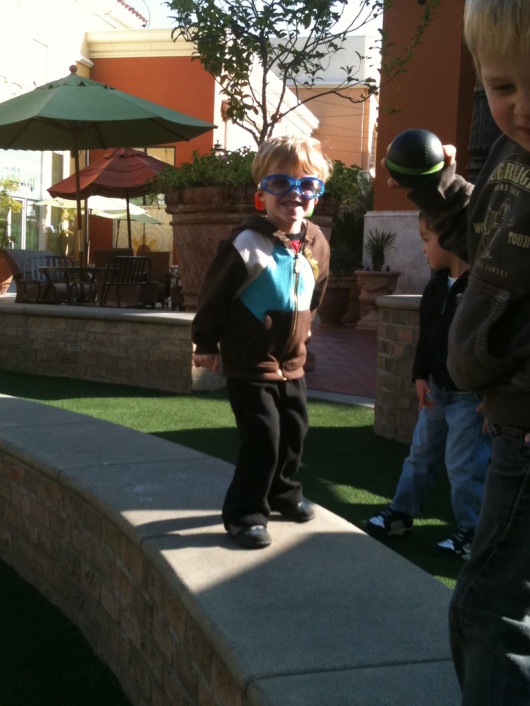 A 3-year-old T is getting his pre-show sillies out at Bella Terra (January 2011).

Bella Terra’s Kids’ Club schedule varies depending on the time of the year. From May through September (AKA “summer schedule”), shows are held once-weekly every Monday at 10:30 a.m. and usually wrap up by around 11 a.m. I strongly encourage summer attendees to arrive by around 10 a.m. to get a seat (in the shade, either under one of the pop-ups or at the area toward the back of the amphitheater stage-right); arriving early also allows the kids to get the sillies our pre-show, too (bonus). After summer ends, Kids’ Club changes over to a monthly “winter schedule” with shows held the first Monday of the month from October through April (same show time of 10:30-to-11 a.m.). 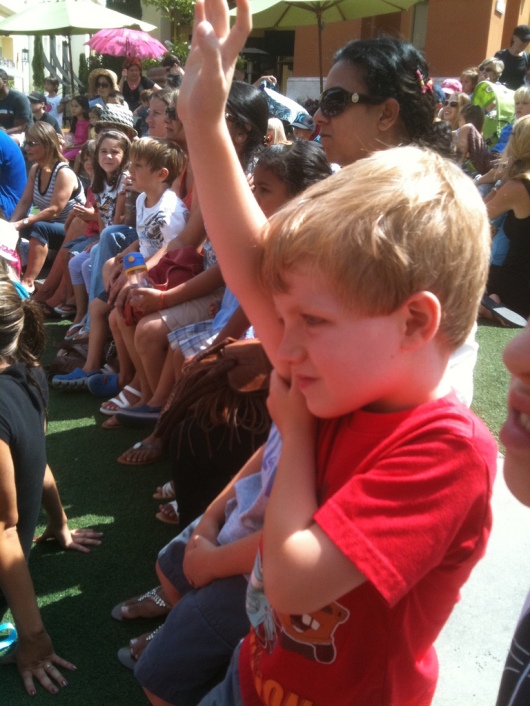 Pick me, pick me! T really looks forward to the chance to be in the Bella Terra Kids’ Club shows each time we go. 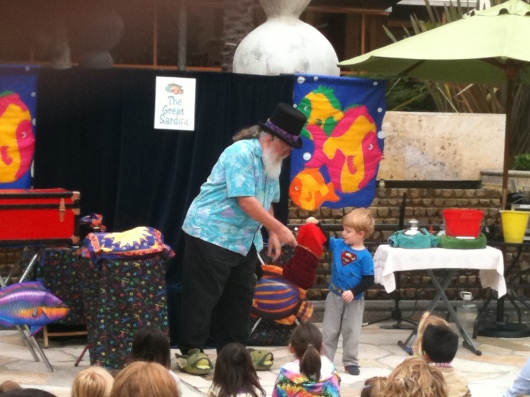 T up on stage with a magician during summer 2011 at Bella Terra Kids’ Club. 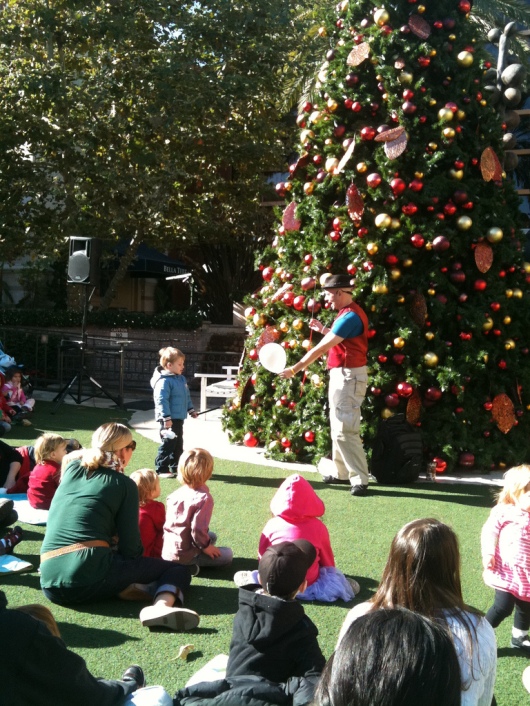 A four-year-old T on stage during Bella Terra’s Kids’ Club Holiday show in 2011.

One great way that the Kids’ Club performers keep the audience’s attention each week is by involving them in the show. Each week, the act has some way they get one or a few folks up on stage, and it’s always wildly entertaining, especially for the kids. This part of the performance is something that T definitely looks forward to each time we go; in fact, he’s been up on that stage more times than I can remember over the years. Encore, T! 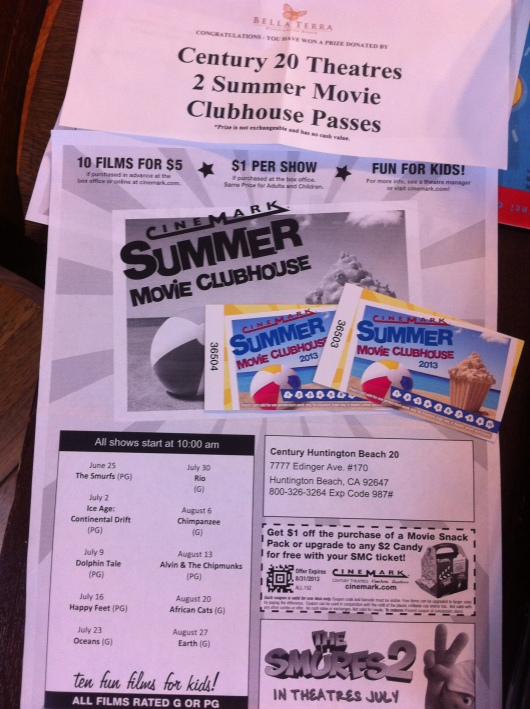 Our lovely raffle prize from Bella Terra earlier this summer! Thanks Mr. Ron!

In addition, every Kids’ Club show ends with a FREE raffle held by Kids’ Club coordinator and MC Ron Merkin (AKA “Mr. Ron”). As he always says before every show, everyone in attendance gets a raffle ticket: “Every child, every adult.” Raffle prizes are a nice mix of restaurant gift cards, high-dollar retail coupons, and products (all donated by Bella Terra mall retailers to marketing director Pat Rogers for the cause). Periodically throughout the year, there are additional raffles of such things as OC Fair tickets or summer movie passes depending on special events in the area. Actually, T won two Summer Movie Clubhouse passes at a show earlier this season! And that’s not the first prize T has won either. Hmm… between the number of shows T’s been in and the prizes he’s won, maybe a Vegas trip is in order?! 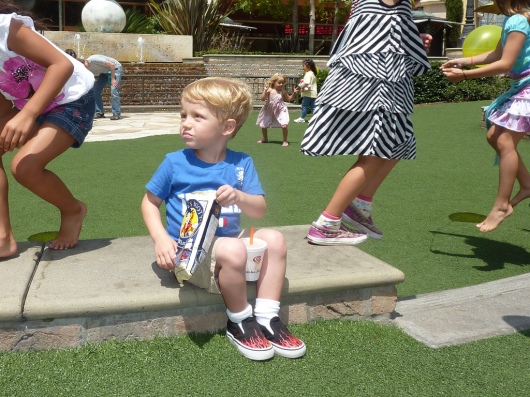 Another part of the Bella Terra Kids’ Club shows that T always looks forward to is his “Pirate Booty and Jamba Juice.” We started this tradition of a late-morning snack during the show when we started attending the shows in 2010. 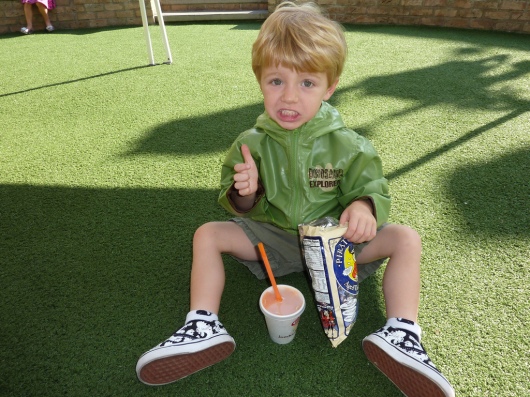 T’s gotta have that snack… it’s not a Bella Terra Kids’ Club show without it! 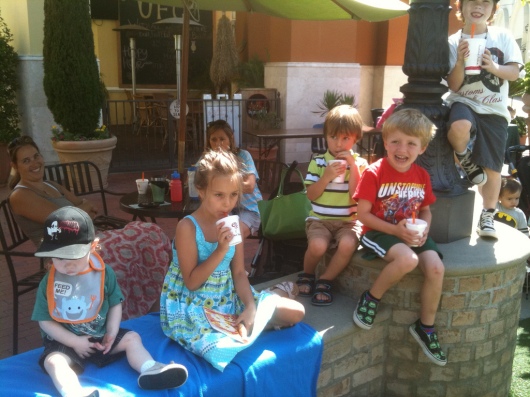 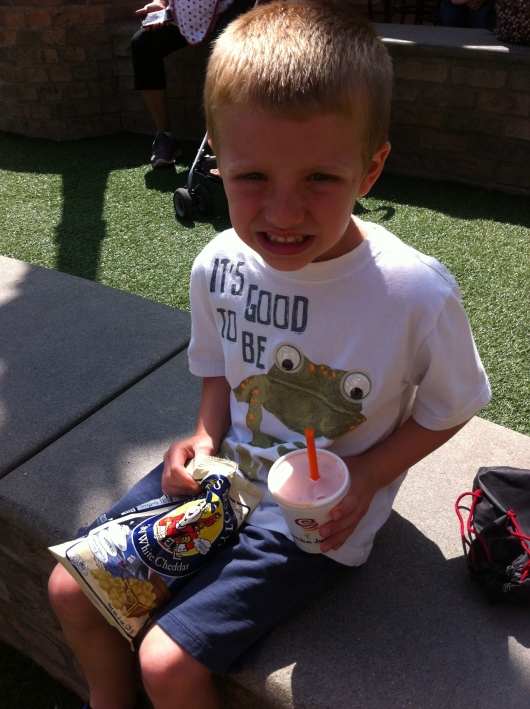 The schedule for Bella Terra Kids’ Club for August as it stands currently is as follows:

Aug 5 (TODAY)
Russian Circus
Our personal circus is back in town! Tim and Boris are father and son with decades of center ring experience. Your entire family will thrill to their juggling, magic and classic clowning!

Aug 12 (NEXT MONDAY)
Singer Dan Crow
Dan has travelled the world singing songs to children in US military bases, schools, libraries and more. His songs are filled with fun and interactive surprises.

Aug 19
The Soozie Show
Perhaps one of our most unique shows, Soozie uses balloons to twist and turn her performance into something special. Get set for a fast-moving and clearly fantabulous morning!

Aug 26
Magician Stoil Stoilov
We’ll all find out if Stoils has some new tricks up his sleeve since coming back to the US after 9 months in China. He’s always been a Kids Club favorite and we’re excited to have him reappear at Bella Terra!

(If I can find links to the acts, I will add them for additional information later.) 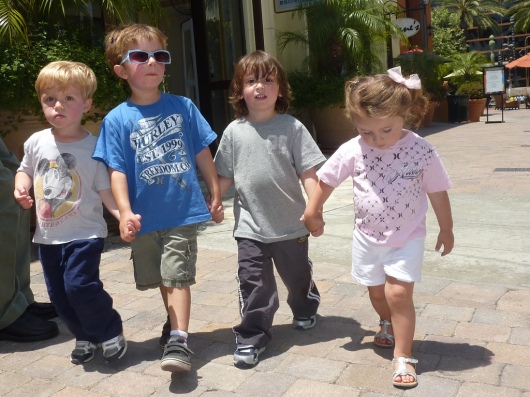 Enjoy your Mondays this summer at Bella Terra, RMT’ers!

So don’t let Mondays get you down, RMT’ers… get up, get out, and get on with the show! Have a great week!

Not near Huntington Beach, CA? No problem! For more information on finding a Kids’ Club show in another area of the LA-OC region, or if you are a mall manager interested in bringing a Kids’ Club production into your facility, then please contact “Mr. Ron” Merkin at Center Ring Productions at 818.783.3277 (Office / Fax); 818.427.9056 (Cell); or ron@centerringproductions.com (Email). Mr. Ron’s successfully produced Kids’ Club shows for area malls since his first at Topanga Plaza in 1989! For more information on Bella Terra entertainment and events, please contact Marketing Director Pat Rogers at rogersmarketingservices@gmail.com .