As many American school children do during the month of November, T began a unit at school devoted to Native American facts and history. For a few weeks, the Kindergarten students learned some basics about the different tribes, lands, customs, and cultures related to our land’s original founding fathers and had a blast doing it. His teacher included an introduction to traditional pictographs so that when time came to decorate their vests for their upcoming Thanksgiving school events they were able to do so in a more authentic way.

T with his Native American name for the month of November! All the Kindergarten kids received a specially chosen name from their teacher. I think T’s is on point.

Just a few of the pictograms (I call them pictographs) T learned during his Native American unit in school this month.

When we could see how excited T was day after day about all of his new-found Native American knowledge, just like how he was excited about the bats, C and I hunted and gathered information to help us move his learning beyond his classroom. That’s when C came across a small but incredibly relevant museum that sounded like the perfect way to spend an hour or two of our time toward extended education not just for T but for all of us.

A few weekends ago, we visited The Autry’s extension campus at Mount Washington, The Historic Southwest Museum of the American Indian. This is home to the second largest collection of Native American objects in the United States, and it is widely regarded as one of the finest collections in the world.

The ceramics and pottery gallery at the Southwest Museum of the American Indian. Sorry about the lighting; it’s a no-flash photography place, RMT’ers.

T really enjoyed looking for the pictographs and other artwork on the ceramics at the Southwest Museum. 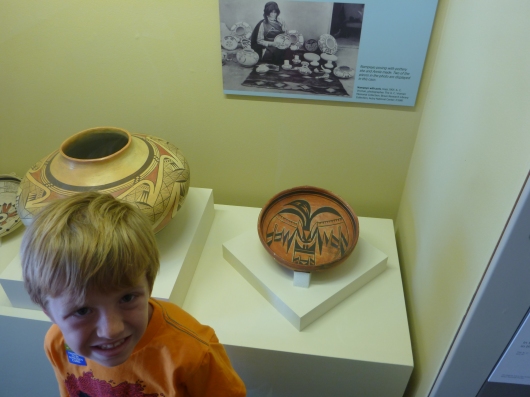 The collection’s main attraction on display at the moment is an amazing array of ceramics from the southwestern United States. Upon entering at the main doors at the top of the hill (where you can also find free off-street parking adjacent), turn right to enter this gorgeous gallery that’s home to some of the best preserved pottery I’ve ever seen from various tribes and time periods. We definitely spent most of our time here during our visit.

Archaeological tools from some of The Autry’s own sponsored excavations. 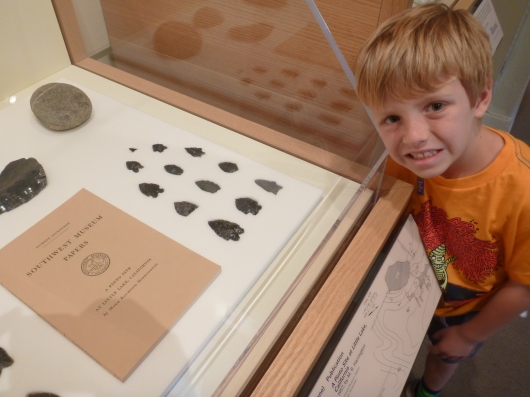 From the website: “(Museum) artifacts range in age from prehistoric to the present, documenting Native history and culture in the Americas. Some of the earliest pieces in the collection include archaeological materials from museum-sponsored excavations, including those led by notable archaeologist and curator Mark Raymond Harrington.” 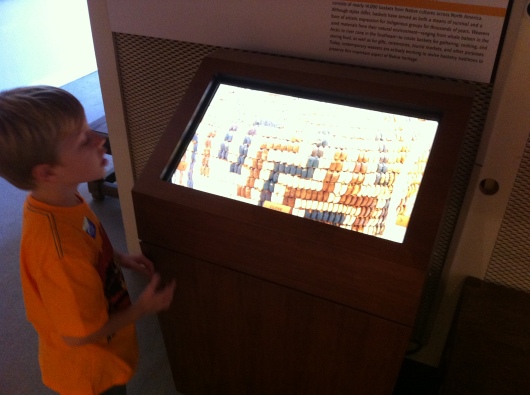 T touchscreens his way through a vast library of Native American baskets and textiles.

In the same archaeological gallery downstairs, visitors may browse a digitized catalog of textiles and baskets (currently off display due to building improvements and other structural updates) and take a short stroll along the museum’s historic time line, from its founding in by Charles Fletcher Lummis in 1907 through present day. You can read more here for additional history related to the museum’s journey over the last 100+ years. 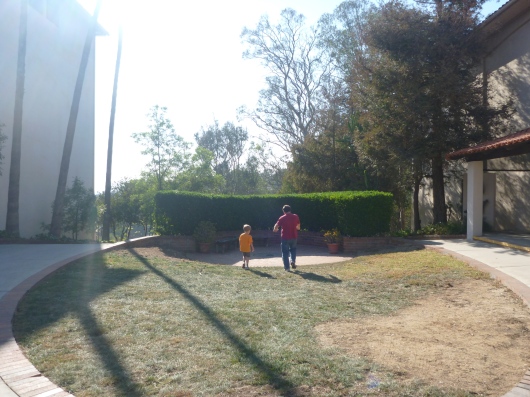 Before entering through the main doors of the Southwest Museum, C and T took a closer look at this rainwater harvesting basin, a model based on one like many Native Americans might have used. 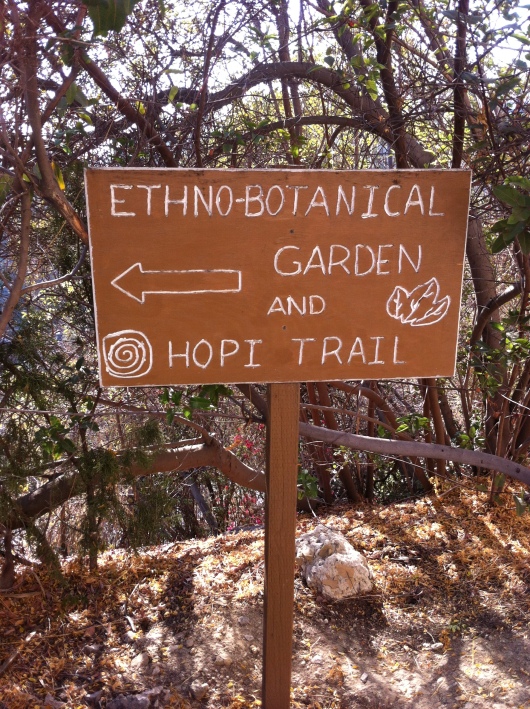 The Southwest Museum’s garden and trails are out back. Visitors are free to explore as long as they like during hours of operation.

Of course, T found a canon. He always seems to do this! 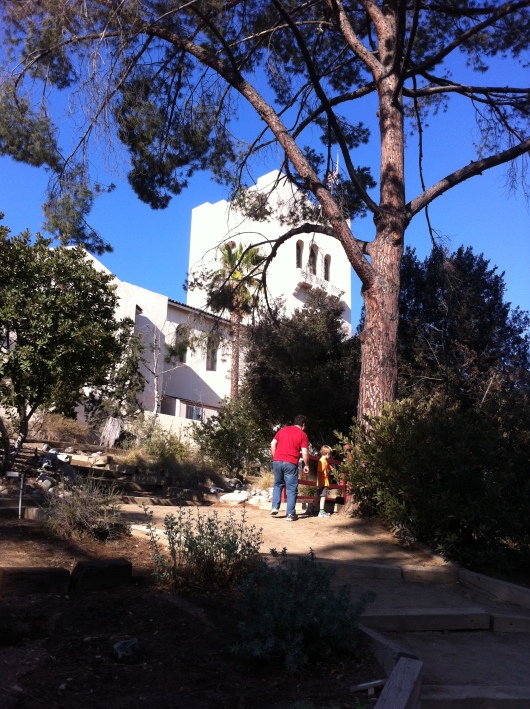 View from atop Mount Washington and the Southwest Museum. 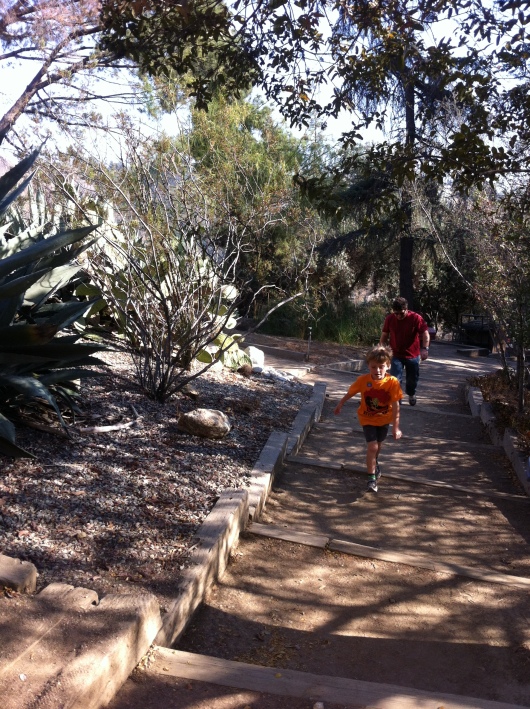 The boys hike back up from the lower area of the gardens out back of the Southwest Museum.

And the experience doesn’t end inside. The Southwest Museum boasts an extensive garden and other outdoor space. Here, guests may sit or walk (and in T’s case, run) and enjoy the views offered from the vista atop Mount Washington location. In fact, when approaching the museum by car or Gold Line (yes, it’s Metro accessible with a stop right across the street!), the tower of the building is visible from afar, which helps with getting there.

T also found an elevator. Let’s see where it goes!

Signage for the lower entrance of the Southwest Museum of the American Indian, part of The Autry collection located at the Mount Washington campus in Los Angeles.

An elevator and now a tunnel?! T hit the jackpot!

Lower entrance for the Southwest Museum of the American Indian. The Metro Gold Line is just steps from here, making this small museum accessible and easy to find for anyone looking for a unique way to spend an afternoon in Los Angeles.

Speaking of getting there, I already mentioned the main entrance at the top of the hill, but the entrance at Metro-station level shouldn’t be missed either. T’s grandpa tipped us off to the tunnel below the historic building, which is accessible from indoors via elevator. The tunnel then leads to the other entrance down below. Of course, T loved the tunnel, but what six-year-old doesn’t love a tunnel (or an elevator for that matter)?! 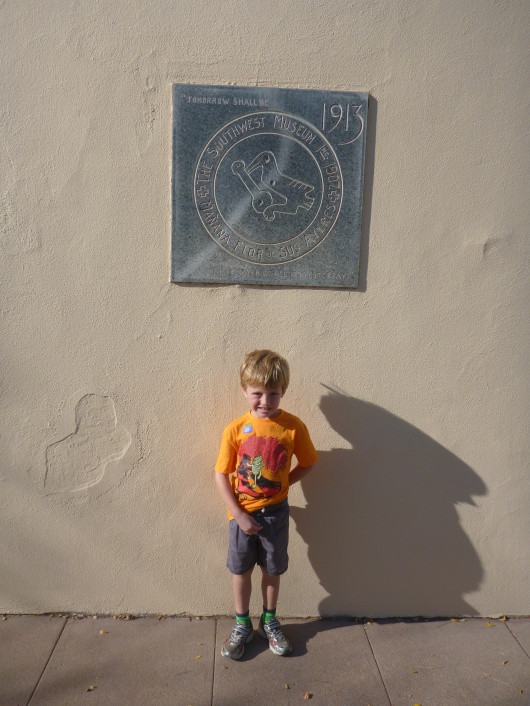 While the Southwest Museum is on the smaller side compared to most others in the Los Angeles area (which is due to building construction and closures and/or other financial setbacks related to earthquake damage over the decades and/or other management-related issues depending who you ask), it’s important to note that it is the oldest museum in Los Angeles. That alone deserves all of our attention, attendance, and accolades. We were happy to have discovered the Southwest Museum; despite their current challenges, it was the perfect size for us and for our needs, and we enjoyed our visit very much. It’s hard enough to keep a young child engaged during a vast museum experience, even when they are excited about the topics on display, so we can appreciate these smaller, off-the-beaten-path venues right now (though we do wish the museum well with its future plans and ventures, of course!). Oh, and did I mention that it’s free admission for all? But do note their limited hours of operation. The Southwest Museum is open to the public just one day a week, Saturdays from 10 a.m.-through-4 p.m., so be sure to plan your outing accordingly.