T during a Running Back (RB) drill at flag football practice. He took this one in for a TD!

While on defense, T snagged a few flags, afterward declaring, “Victory is free!” I don’t know exactly why he was screaming that, but given he was playing Free Safety, I guess it was appropriate (?!).

We led up to the game Saturday with our usual Tuesday practice, which consists of a variety of throwing, catching, and running games and drills. In addition to those, Coach Chris teamed up with the other Rookies’ league coach at our rec center and arranged for us to have a short scrimmage in preparation for game day. Yes, we have two Rookies’ teams AND two other older teams also just at our rec center alone!

During the scrimmage, T got a little turned around. Our practice field was a wee bit narrow to play 8-on-8, forcing the kids to run back before heading forward.

Coach Chris sent T in with a play during the scrimmage. The play never really panned out (wah-wuh).

T did well during the scrimmage! Coach Chris pulled him aside before a few plays to review specific plays as either QB or RB, and he also played Free Safety (FS) each time the defense took the field. He absolutely loves playing FS, so he was most excited about that!

Game on! T’s first flag football game gets off to a crashing-good start, with T (red shirt, green shorts center of the photo) putting up a nice block on the O-line!

I love Coach Jonathan’s stance with his hands on the back of the head. Yes, oftentimes it was difficult to see what was going on, but it was still oh so very fun to watch! Hi way back there on FS, T!

Saturday was the real deal: The Wardlow 49’ers (named for our local college team) played the El Dorado Jets. All our games this season will be at Marina Vista Park on Saturday mornings, which is the perfect location (close to our house) and a perfect time (10 a.m. or 11 a.m., not too early nor too late!). The field itself is about 40 yards long and about three times as wide as his practice field, allowing for better game play. While we don’t keep score in park league play, I do know that T had two touchdowns (TDs), one while he was playing Quarterback (QB) on a reverse (no, really, his team runs the reverse!), and the other was on a hand-off to him as Running Back (RB). SO awesome!

T gets a play call from Coach Chris. It’s not at all obvious who’s going to be in on the next play… no, not at all! Ha! 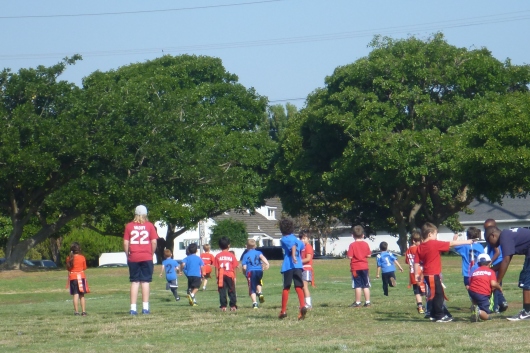 T running the ball around and through the other team’s defense.

And T takes it in for a TD!

Even better were T’s moments on defense at FS. I am telling you, I think T’s found his niche in the sporting world to date; this kid seems programmed for the FS position (I think we need a Weddle jersey, Grandma Beep!). Then again, T’s a six-year-old who loves to play tag and chase other kids, so it’s likely that most kids this age are made to play flag football’s last line of defense, I suppose. 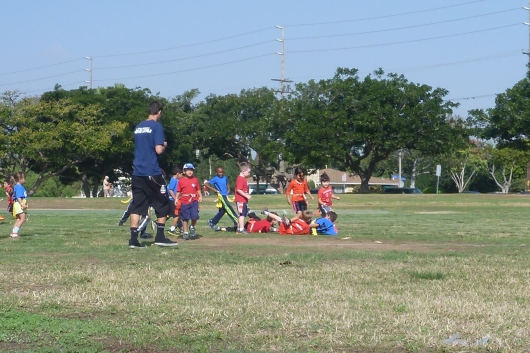 T’s first awesome “tackle” that should have stopped at the flag coming off but T couldn’t really get the flags off!

On T’s next defensive play, he stopped this opponent from scoring!

At FS, T had two amazing open-field “tackles,” one that actually prevented the other team from taking the ball down and scoring during their possession! Though he didn’t really stop at just taking the other players’ flags, he didn’t hurt anyone during the two plays, so it’s all good (for now). Though his more, um, aggressive style of defense did prompt one or two of the other team’s players to try to block him out of future plays as the game went on. 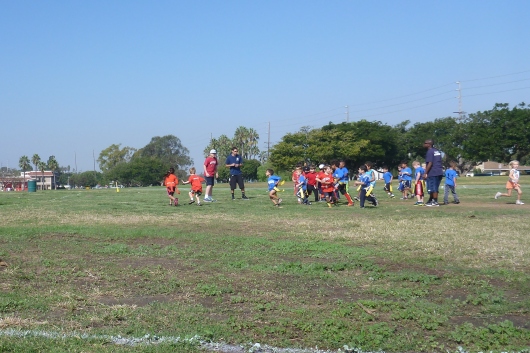 T hands off for a reverse run! They have a little work to do on the “fake” part of the reverse, but for the most part they are executing these plays pretty well for their age!

And T’s off and running again with the ball! He had two carries that resulted in TDs!

I can’t say it enough: I am thrilled that T wanted to play flag football. I love the game at all levels; I love the season (that crisp fall morning air!); I love that T’s games are on Saturday mornings (making me feel like a real “football mom”); and I love that he loves playing the game, too. I even brought snacks to the game Saturday for T and his teammates (another real “football mom” moment realized!).

Their team had 14 players show up on game day; our count was a mere eight in comparison. Thankfully it’s just flag football, but still the other team could have rotated a few of those kids in and out to make it a more man-on-man match-up than a two-on-one rout.

Great game all around, 49’ers and Jets!

After seeing a recent Frontline on football injuries, football, while a fun and entertaining game to watch, football probably is not going to be a game that C or I will push for T to keep playing long-term as the flags come off. Of course we won’t discourage him either. We will just have to see how the season unfolds and if T keeps up the on-field enthusiasm he’s had so far. Score!

RMT’ers, what “natural talents” are you starting to see coming out of your early-elementary aged kid(s) as they mature and try out and become exposed to more activities and experiences?