On Mondays at T’s new school, all of the classes assemble on the playground after morning bell for weekly announcements. It’s a wonderful opportunity for the school to gather together – teachers, students, administration, and parents all – as a community for 10-15 minutes a week. Most of the announcements are already written in our online and printed newsletters that come home, but it’s the very idea of the gathering that is just a lovely way to start off the week. Remember what I wrote Monday about finding inspiration where ever you can, RMT’ers? Yep, that. 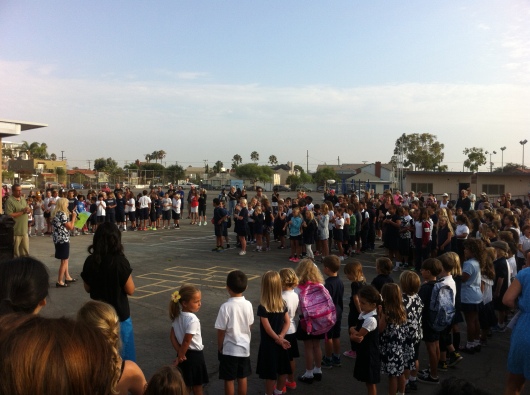 Parents are welcome to stay an extra few (several?) minutes after drop-off on Monday mornings for our school’s weekly assembly.

The kids also get their hand at participating in such morning classroom rituals out in front of the entire school, such as leading the Pledge of Allegiance, a patriotic song, the school motto (set to the tune of, “You’re a Grand ol’ Flag”), or the PeaceBuilder’s Pledge, with a couple of children responsible for holding the American flag. A few students from throughout each grade (or maybe it’s certain members of the school council?) get specific responsibilities week to week, or at least that’s what I can tell from two weeks into the year anyway. The Kindergarteners’ place of honor, you ask?

T’s first in line, which means it’s his turn to hold the flag for Monday assembly! 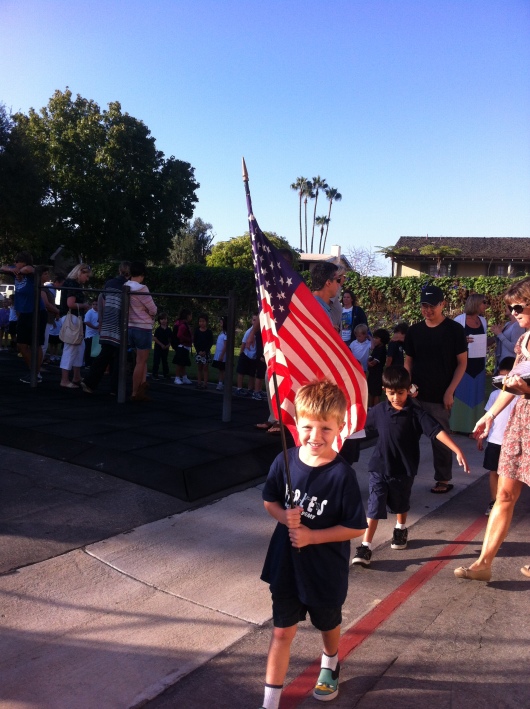 Yep, holding the flag! And look who got to hold it this week? And, yes, he was very excited. 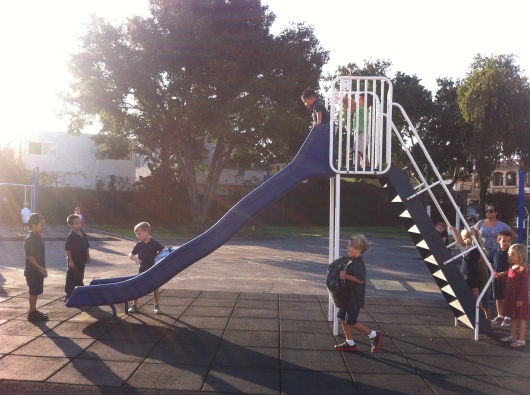 So that all of the kids can play before school, T made the executive decision that it’s our job to bring a towel so he can dry off the playground equipment. This means he rides down the slide a few times on the towel, and then he goes around drying off some other bars here and there, too. Way to take responsibility rather than just passing the towel, T!

How this happened… last week on the first Monday of the year, T noticed that the person who was first in line for their class got the job of holding the flag at assembly, along with another student from the other K class. This week, he told us that he’d really like to do that. To help him with a chance to do so (a chance because who knows if that was all just a random happening, after all), all I did was gently remind him as he played before morning bell was that the bell was going to ring in two minutes.

Mrs. K guides T and his class through the crowd toward the assembly area on the playground.

“Stare at the hair” is the motto that Mrs. K uses to get the students to stay in a nice, straight line. I love that! 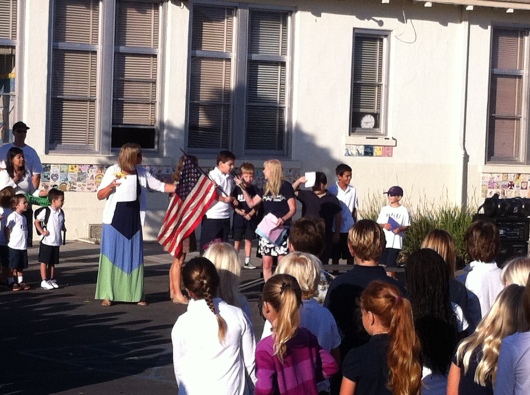 I was one proud mom Monday morning!

That was enough. He stopped what he was doing (drying off playground equipment of the morning dew with a towel we’ve decided to bring with us daily so the kids can actually play on the equipment) and promptly hustled over to the head of the line well before most of the others. One classmate was standing nearby, but she quickly stated she didn’t want to be first in line nor did she want to hold the flag. Lucky for you, T, and long may it wave!

We shall see who gets to hold the flag next Monday, but my guess is that it won’t be T, and that’s OK. Taking turns and sharing is what Kindergarten is about, right, RMT’ers?

One response to “T Gets Flagged for a Most Important Task at Monday Assembly!”