Today is T’s first day of Kindergarten. While this is our sophomore year of public school, today is his first day at a new school that we hope will be his school for the next six years.

T’s too cool for Kindergarten.

T on the front steps of his new school. 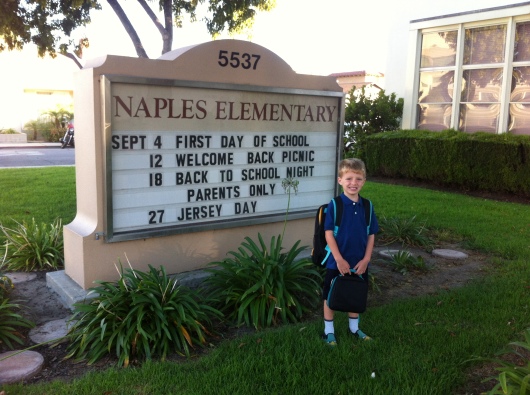 Regardless of the change and newness that is, I didn’t cry. In fact, I was somewhat confused and anxious (and hot as we were crammed into the classroom, 85 degrees and humid in our area at 10 a.m. as I write this, folks) as to why we were asked to stay so long (20 minutes) in-class before leaving. Then I quickly remembered as I looked around the room at the other teary-eyed Mom and Dad faces: This isn’t everyone’s second year of “big kid” school. Just because it’s old hat for us, and the first day of freedom for me with the promise of more than 100 more for a long run of it (woo hoo!), there are many parents today who are packing up their precious ones for the first time of Monday-through-Friday almost all-day schooling, and their new reality just hasn’t sunk in yet.

T’s “whatever” first day of K breakfast. He ate it all, minus part of the pancake that he took in the car with him.

Why would anyone cry if they went to school this close to the beach?! This is directly across the street from T’s school. Yes, these homes have boat slips. No, we don’t live in this area (though I wish we did!).

T making his way to the Kindergarten play yard.

First one to arrive! 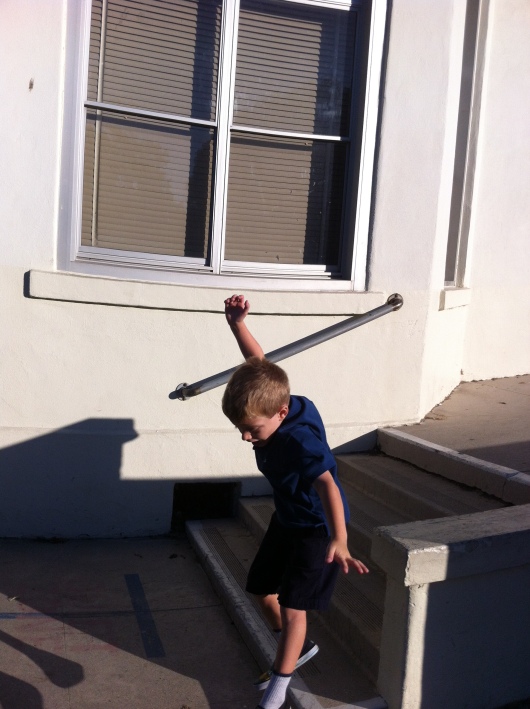 T jumps right into his first day of Kindergarten!

T’s the king of the playground!

All lined up and ready for Kindergarten! 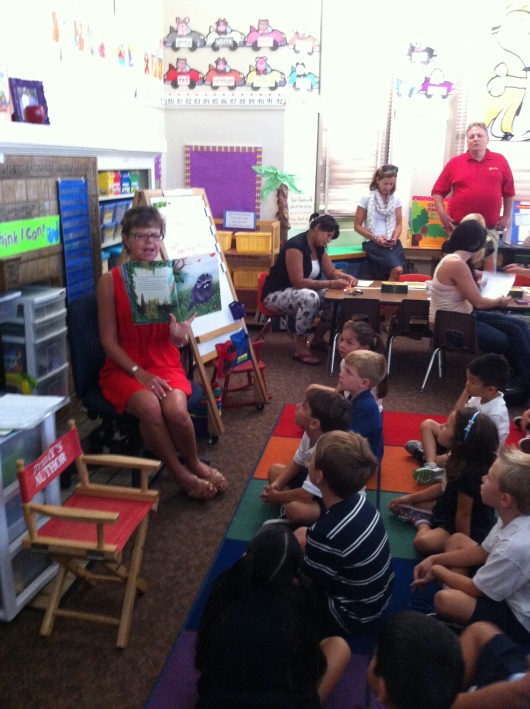 T front and center and on an orange square. I really REALLY hope that is his place on the rug for the entire year. It would make him so happy to be in the front row AND on an orange square. By the way, his teacher Mrs. K read a book called “The Kissing Hand” about a raccoon who didn’t want to go to his first day of school. All I kept thinking as the story went on was why even put this idea into their minds. However, it was a lovely, comforting tale that ended in a lovely way. After she ended the story, we parents then kissed our children’s hands before leaving them on their first day of school. And surprisingly that didn’t even get me choked up (though just thinking about it now sort-of is, aww).

Reality of the new school year has sunk in with us. Deeply. In fact, last year, T bounded out of bed while I was in the shower, bright and early, dressed, and ready and raring to go. This year, I had to rouse his sleeping self to life five minutes past when I’d planned to wake him up and ask three times what he wanted for breakfast, which eventually ended in, “I don’t care, just make whatever!” 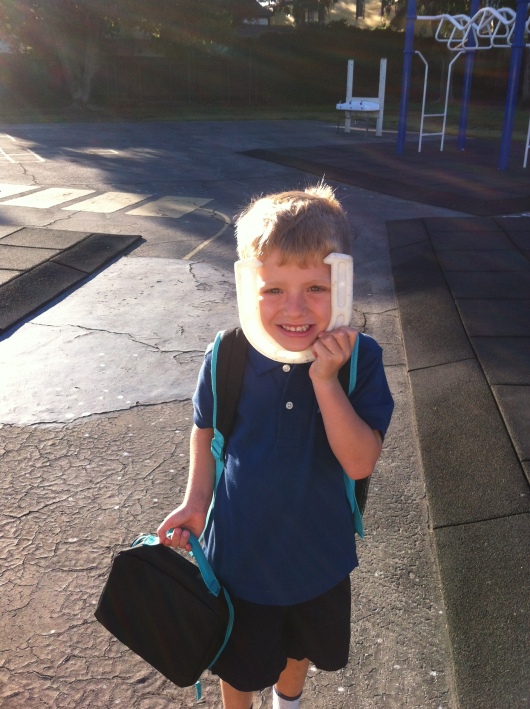 T found a horseshoe on his way into his first day of Kindergarten this morning. Good luck this school year, RMT’ers!

Yep, T’s an old pro at this school thing already at the ripe age of 5-1/2. Watch out, Kindergarten. T’s got this.

Happy first day of school to everyone in the Long Beach Unified School District! And happy school days (daze?) to the rest of you, RMT’ers! Now, time for some coffee… a lot of it. Six-Thirty a.m. wake-ups are something new for us this year, and if anything shall make me cry this school year, it’s that.

3 responses to “First Day Of Kindergarten, Mostly in Pictures”