Our time in London – and my time devoted to writing about our recent family holiday in London – comes to a close today. But before I go, let me share a couple more of our museum stops with you, along with the future five sites we plan to see the next time we visit. 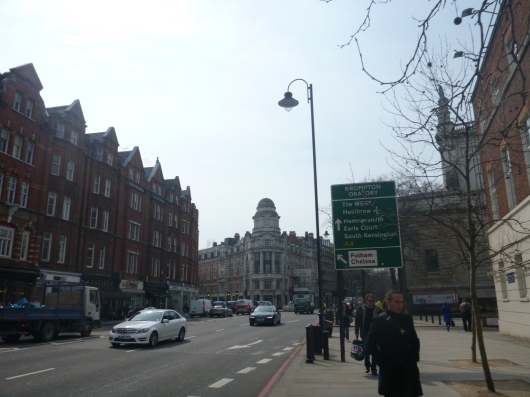 C and T en route to the Natural History and Science Museums in London.

C and T in front of the Natural History Museum in London. 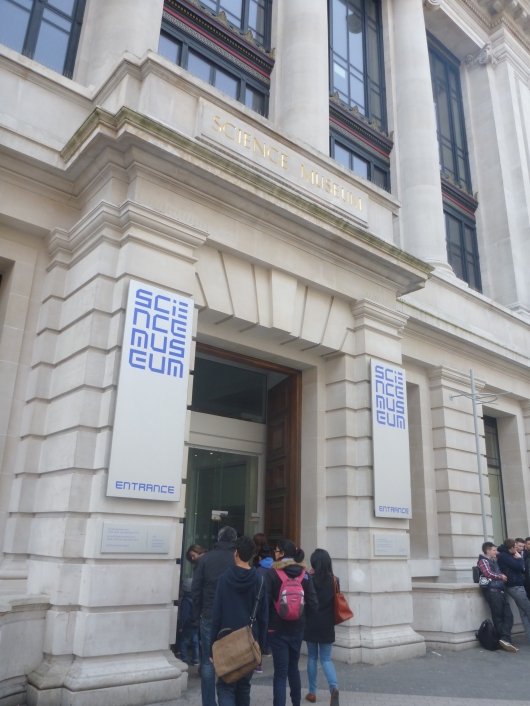 On our last full day in London, we managed to take a quick trip through two of London’s more well-known museums, the Natural History Museum and the Science Museum. We should have dedicated more time toward visiting each of these wonderful family-friendly places, but alas with so much to see and do in London, we were lucky just to pop in for short visits at each during our final afternoon of the trip.

The “Visions of Earth” entrance to the Natural History Museum, London. 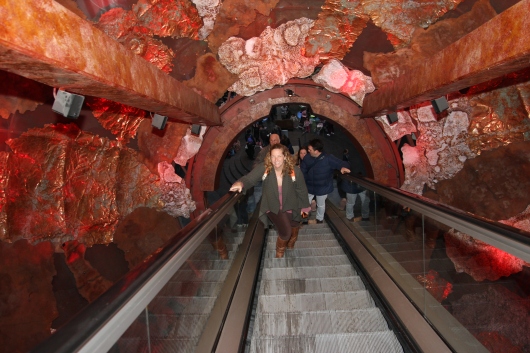 Me on the “Visions of Earth” escalator at London’s Natural History Museum. 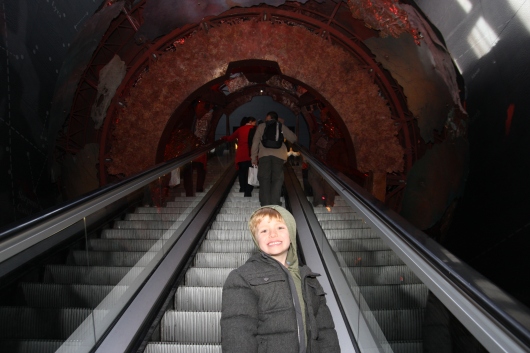 T on the “Visions of Earth” escalator at London’s Natural History Museum.

T in front of an extinct mammal skeleton at NHM, London.

Dinosaur foyer at the Natural History Museum, London. Visitors queue here for the larger dinosaur gallery (entrance is to the left in this photo). 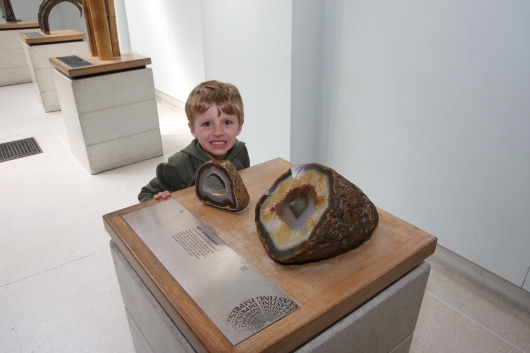 T and a couple of geodes. Our family likes geodes. A long story for another time, perhaps. 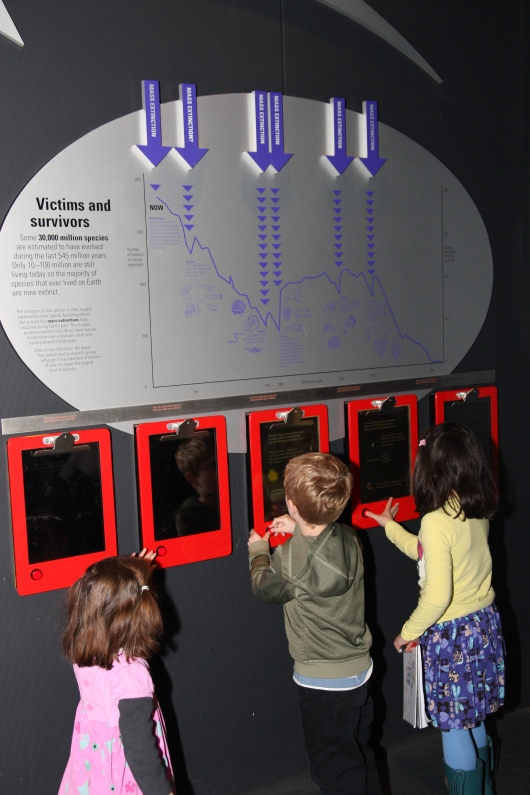 Hands-on activities for everyone at NHM, London. 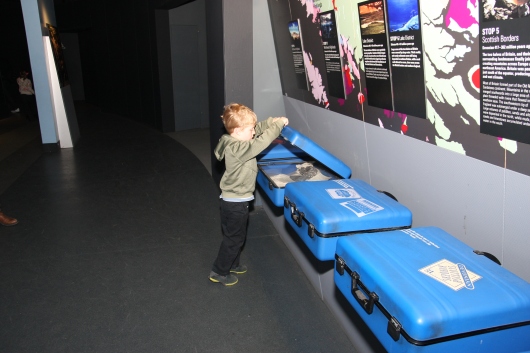 T checking out the suitcases in a geology gallery at NHM, London.

First up, the Natural History Museum. That’s quite an entrance, isn’t it?! Though this area was pretty out of this world, NHM London is better known for its dinosaur exhibits. Sadly, we didn’t get into the larger hall (there’s quite a queue without advance tickets, FYI), but what we did see in the other museum’s entrance foyer was pretty gosh darn magnificent. T also got to put his hands on a number of kid-friendly displays and activities throughout many other museum galleries. I know we missed a lot, but we’ll catch more next time. Here’s NHM’s top 10 recommendations for your own (and our) future visit.

T cracking codes at the Alan Turing exhibit at the Science Museum, London. 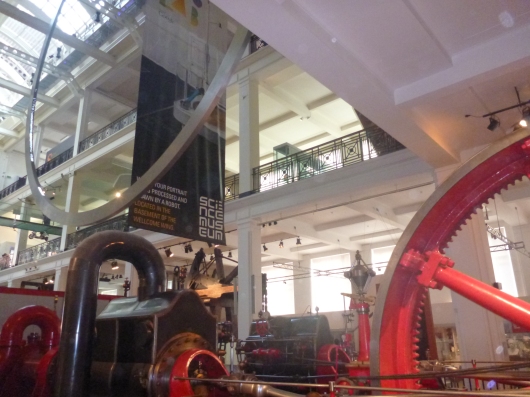 Wide view inside of the main gallery at Science Museum, London. 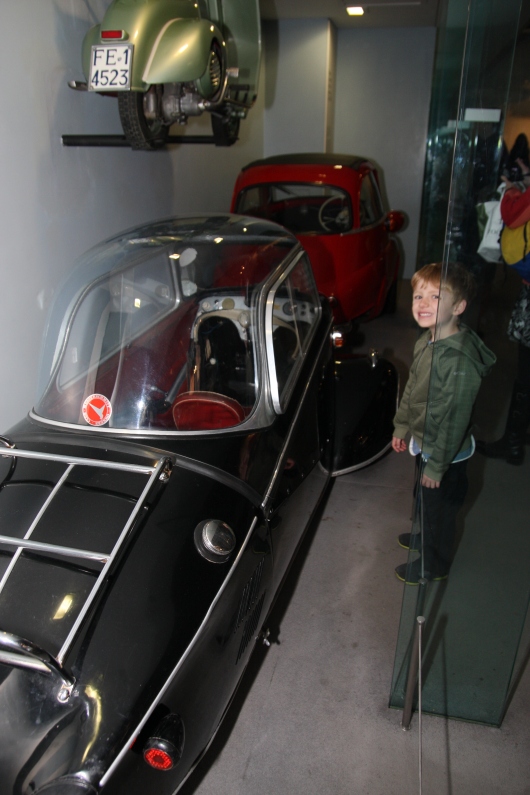 T with one of the model cars inside of Science Museum, London.

Given our limited time inside of these two awesome landmarks, it got me thinking about a few other places that we just ran out of time for during this trip to London. I’ll give you my top five places we hope to visit next time around.

1. Victoria & Albert Museum. The V&A is the top textile and decorative arts museum the world over. I visited here in 2001 and simply adored it, but we just didn’t have any time left on our holiday to go here. I also knew that perhaps this wouldn’t be at the top of T’s list of most interesting places to see in London (C’s either). However, I think I’ll insist we put this on our itinerary next time. It really is a world-class museum and for that reason alone deserves a quick-stop if not an entire afternoon. It’s also right next door to the NHM and Science Museums, too.

2. Kew Gardens. Also known as the Royal Botanical Gardens (not to be confused with The Royal Parks), Kew Gardens was on our long-list of day-trip options, but we wound up choosing Greenwich and Isle of Wight, which really left us no other days for day-tripping without cutting even further into our central London sightseeing. But Kew makes the cut next time. It’s about as far to the Southwest as Greenwich is to the Southeast of Covent Garden, so not too far out-of-town, but just far enough to require at least a half-day for the trip down and back out of city-center.

3. London Eye. I don’t think I need to talk much about this one as it’s only one of London’s most popular tourist attractions. I already mentioned in this post the reasons we passed the London Eye up on this trip, but I think if we go back to London and don’t go on it again, people will start to wonder if we really have a young child and if we’re truly American. After all, don’t kids and Americans love a good Ferris wheel?! It is one of the best after all.

4. National Maritime Museum, Greenwich. You can read all about our time in Greenwich here. Next time we go to London, we’ll definitely “make time” (get it?) and return to Greenwich just to go to the Maritime Museum. It’s one of if not the top-rated maritime museum worldwide, which at least deserves a walk-through.

5. Windsor Castle, Stonehenge, Bath (Day-Trip). For our all-day excursion out of London, this tourist trifecta is our top pick next time. Apparently, it’s many others’ top choice as well. We’ll just need to get a few recommendations first-hand of a tour group or guide to hire given all of our options. Any rec’s, RMT’ers? 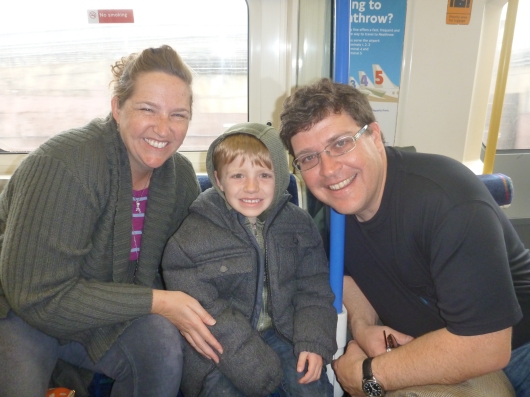 As we said goodbye to London… 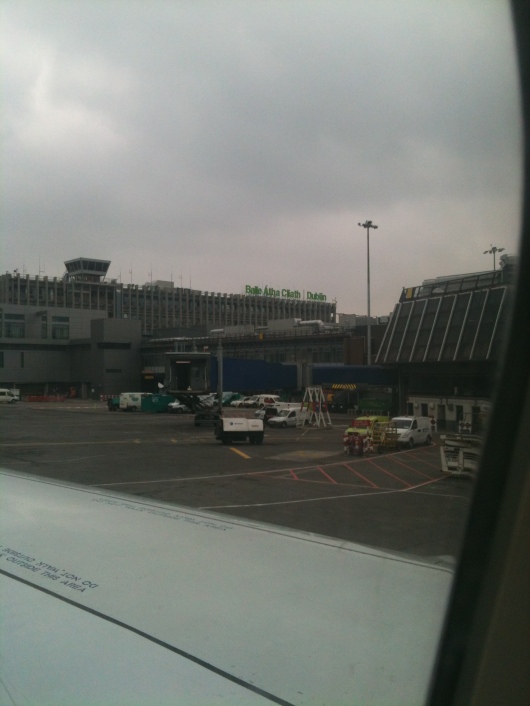 … we soon bid hello to Dublin! I’ll be back on the blog soon with stories from our time in Ireland!

So ta-ta for now, London. We had a jolly ol’ time, and we can’t wait to do a return trip. Laters!