While T says goodbye, he also says hello… or in other words, it’s time for some out with the old and in with the new around here lately. 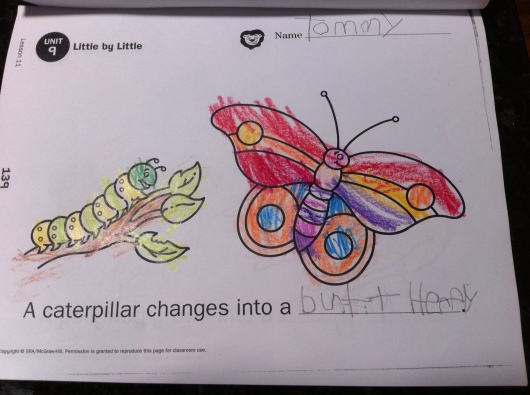 I love phonetic spelling, don’t you? And what better picture to illustrate the changes of the season, and the fact that T’s coloring has improved so much over this school year. Happy spring, RMT’ers!

T clearly is growing up. We have been doing a lot of spring cleaning around here since returning from our vacation, and with that has come great change. Not just change related to “stuff” but change meaning that T’s making it quite clear that he’s growing up and growing out of various activities, clothes, and themes. He’s five-and-a-half now, don’t you know (and please do not forget the half around him, lest he remind you!). 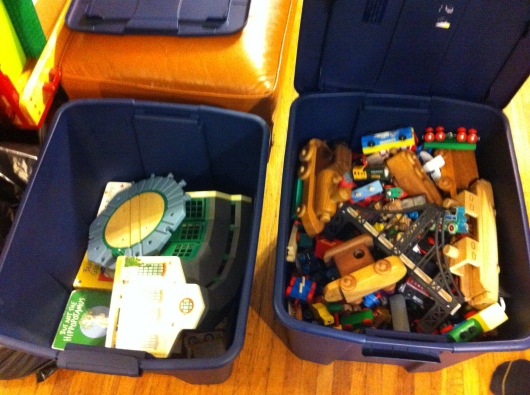 Bye-bye, Thomas. Thomas and Friends, that is. Yep, T’s done with his toddler trains, and up to the attic they shall go. These are all keepers for the time being anyway. I can cull and donate another day once we’re further from this particular milestone. Sniff.

The biggest change by far was the other day when T declared it was time to put away his Thomas Trains to make room for other, more “interesting” toys. When I mean he declared it, I mean he said it and immediately after that declaration asked where the empty bins were for the attic. Yep, this was one milestone moment for the RMT household in that Thomas and his Friends have had a home here for years now; I mean YEARS. He got his first Thomas item when he was just one-and-a-half-years-old or so, so that’s a four-year run for a set of toys. Not bad, but still a bit bittersweet to say goodbye to this era of T’s childhood. It doesn’t mean he’s done with trains exactly, but he’s most def. done with Thomas and the other younger toy train sets and themes. So bye-bye, Thomas. Enjoy the attic with the rest of T’s beloveds. 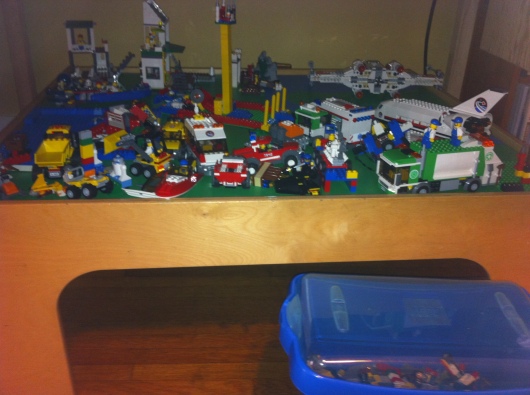 A common view of our living room these days. It will be nice to relocate some of these LEGOs to T’s room now that he’s made space for them.

Oh and what is T making room for exactly? How about this pile of LEGOs? It’s our goal in the coming months to gain a portion of our family/ living room back and move some of T’s “Legoland” into his room. Now that he has some freed-up space in there, it’s more realistic to fulfill this goal sooner than later. 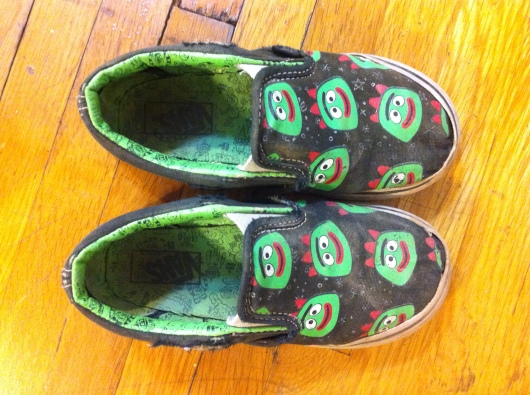 T’s Brobee VANS were well-loved and -worn. This final Yo Gabba Gabba goodbye was long overdue, yet still bittersweet.

Another thing T is way over is Yo Gabba Gabba. He hasn’t watched the show in I don’t know how long, was over the toys a year or two ago, and he’s worn out these shoes (and wore them far longer than he should have, oops). But don’t worry; of course T had his own idea of a replacement pair. 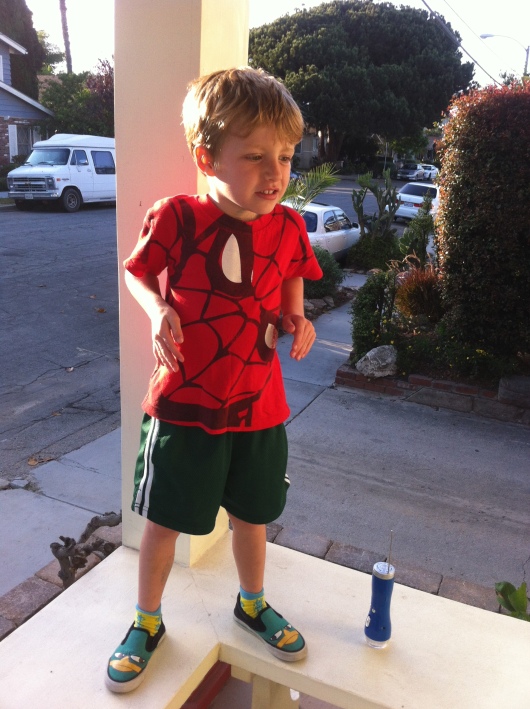 T doing the “robot” while listening to the song “Bust a Move” while wearing his new Perry the Platypus shoes. I still remember my transistor radio from around five-years-old, so this is an awesome tradition I feel I am passing down. However, do note that transistor radios now are called emergency radios and come with built-in scanners and flashlights. Ah, changes!

PERRY! Yes, T’s very into Perry the Platypus around here these days and Phineas and Ferb. I know this is one of those love-it-or-hate-it shows and subjects, but we LOVE Phineas and Ferb and the rest of the Danville folks in our house. It’s a show about creative kids who, yes, might get into some (and fantasy-based) trouble, but for the most part the ideas portrayed are very harmless. That and if T is ever able to replicate any of the “-inators” and/or “big ideas” that these characters manage to construct, I’d be a pretty proud parent. So would C.

T with his great-grandma H at her house last Sunday. 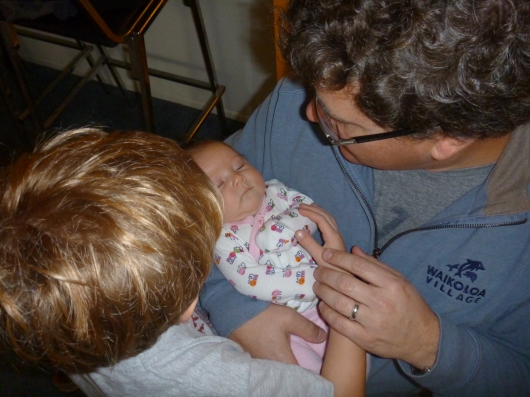 T and C say hello to the newest baby on our block (or in our world anyway)… Baby K!

We also had a few visits over the weekend. We went to visit with T’s great-grandma (who was in great spirits, for those wondering), and we also got to welcome a new friend into our lives. One of C’s best childhood friends and wife had their first baby while we were on vacation, so we made time last weekend to go say hello. Welcome to the world, Baby K! 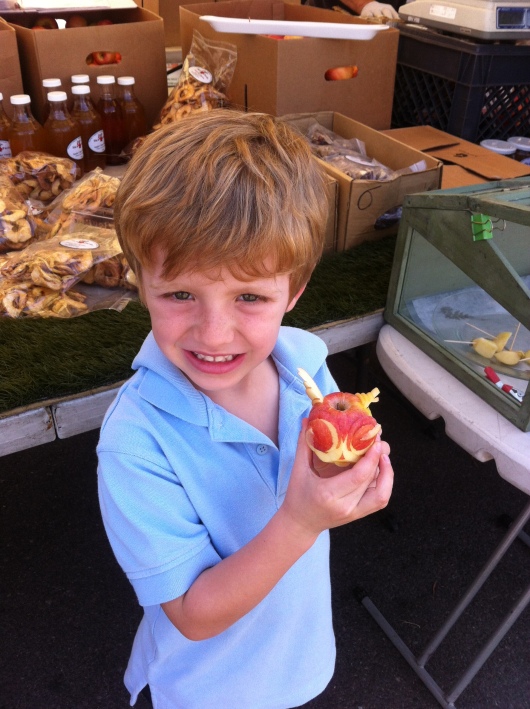 T with a sweet and delicately designed apple from the “Fuji Apple Man” at our local farmers’ market. Best apples anywhere!

Another change in general that happens every spring is the return to our local farmers’ markets for produce that tastes like nothing in the local supermarket (i.e., food that tastes like actual food). Our closest one is held every Wednesday afternoon, which makes it the perfect meet-up place for a play date or for a nice dinner with friends and family al fresco as the weather warms up into the summer. We love buying seasonal, and this time of year is simply scrumptious. Peaches are even returning this early, which is very sweet!

T’s personal depiction of me and his first contest entry. This is a keeper if they mail it back to us. Thank goodness I remembered to take a picture before we dropped it off!

I also wanted to share a new activity T’s been into more and more as he hears about them: Contests. He drew this for our local weekly paper, and we’ll hear in a few days if T’s picture made the cut. At first he thought if he just drew the picture he got $20 or $25. Ha! If winning contests were that easy, T… but I do love his positive attitude. Good luck T!

T hasn’t ridden in the wagon for a long, long time (couple of years at least), but he wanted us to take him out the other night, and it was a gorgeous evening, so we figured why not! What I don’t know is if this was a “goodbye ride” or a “hello to more rides to come” for T.

Anyway, as promised I’ll break up the London trip reports from time-to-time with a more local update. I am sure I’ll have another update very soon. After all, this is the season of ch-ch-ch-changes!

We had quite the mix of weather earlier this week. A Santa Ana with temperatures in the 80s, backed by rain storms, and now we’re back to the “usual” partly sunny and 70s. Must be springtime!

What big changes or milestones are you going through now with your kids, RMT’ers?