T’s “share day” at school is every Thursday. And it’s been so incredibly fun watching T choose what it is he wants to bring to share with all of his friends every week these last few months.

There are only a few rules about sharing in T’s class. Per Mrs. W, the item must fit inside of a standard-sized grocery bag, must be one item (collections count if self-contained), must not be alive (i.e., no pets please), and no weapons (play or otherwise). All seemed like decent, doable parameters to me! Of course, there are the times that the item just doesn’t fit in a bag well; thankfully, exceptions can be made (like last week when we had to pack it in a box for fear of breakage and/or frustration). 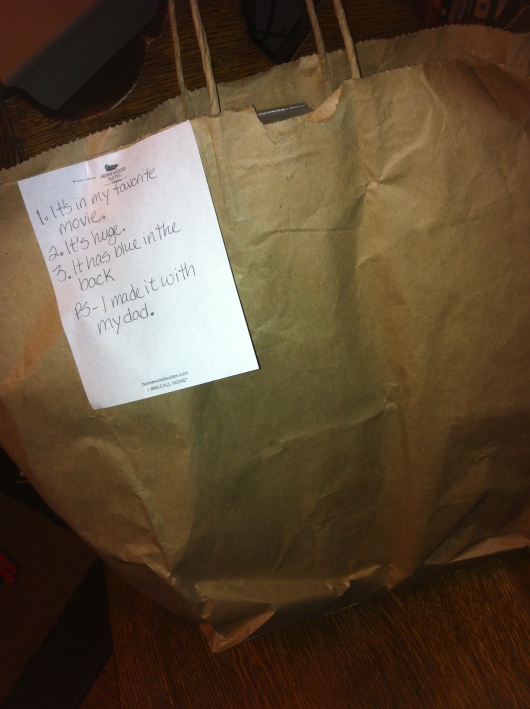 Also, all sharers must put together a list of three clues about the item that Mrs. W or the child reads aloud before the “big reveal.” Then after the sharer shows his/her item to the class, peers ask three more questions about the item. Usually these questions are something like, “Where did you get it?” and “Where do you keep it?” No, actually two of the three questions are ALWAYS those two exact questions. The third varies between, “Do you play with it?” and a true wildcard question that can never be predicted. Ah, kids! 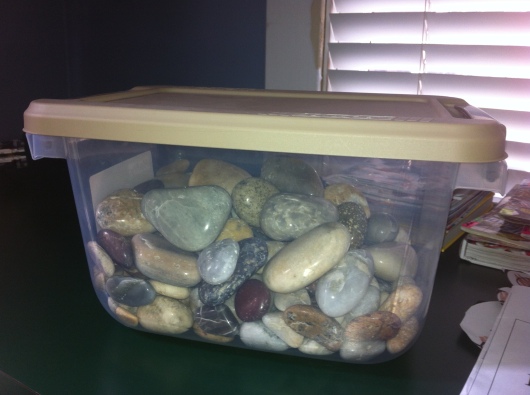 T’s box of rocks. It’s heavier than it appears in photographs. Oh and, yes, for those keeping track, this box is much bigger than his previous box of rocks, which ran out of room in short order.

In October, T kicked off his sharing with… his box of rocks. Yes, the polished rocks from he and his Dad’s rock hunting adventures. This one was a heavy haul, and truth be told it was one that never came around again. And not because I didn’t want to carry it, but I think because T didn’t want to (or couldn’t) carry it! 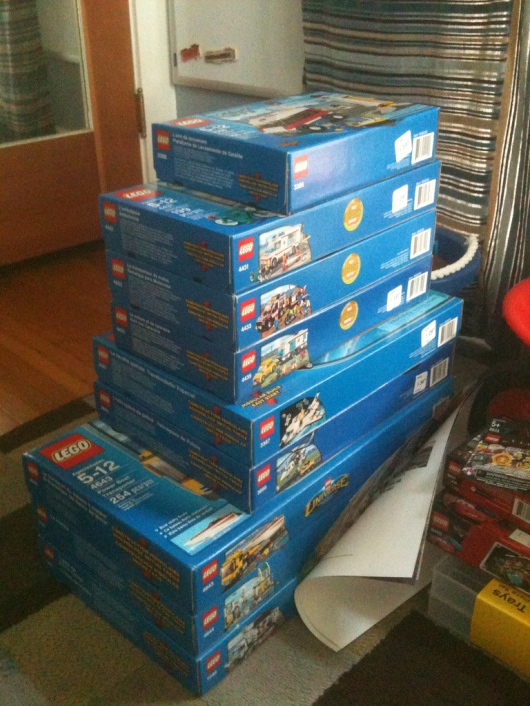 T’s LEGO haul from his birthday. Seriously insane, but surprisingly he’s built them all!

We then entered into the string of LEGO shares. T received quite the pile of bricks for his birthday a few months ago. So many LEGOs in fact that he built one kit a week up through Christmas… and still didn’t get through them all before Christmas! Anyway, T became known as the sharer who always had a LEGO in his bag, and for several weeks running he didn’t disappoint.

After New Year’s, T finally ran out of official LEGO kits to build. However, he did receive a large bucket of bricks (a 700-or-so count bucket to be exact) along with a few bases, so he’s been concentrating mostly on making new “toys” with those. It’s been amazing to see the things T can build from a true pile of bricks without any “constructions” (that’s T’s word for instructions when it comes to LEGOs). He does use some books and catalogs as inspiration at times for his creations, but mostly he’s getting all of the ideas “from his brain” as he likes to put it. Or perhaps he means… The Force. 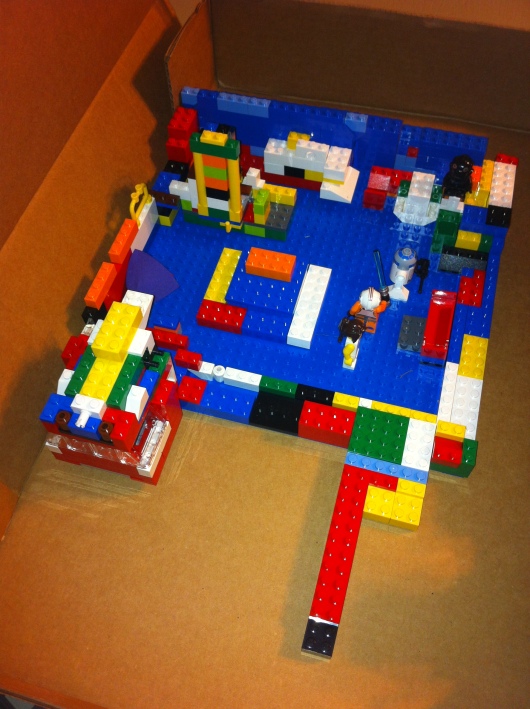 The “Millennium Falcon” all ready to go for last week’s share day. 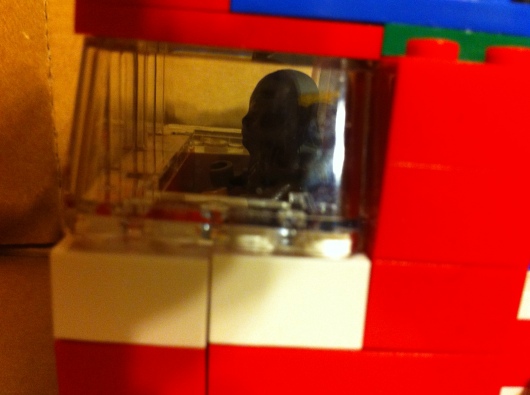 Chewbacca in the cockpit and at the controls of T’s version of the Millennium Falcon.

The latest LEGO brain creation of T’s was this “Millennium Falcon.” Oh yeah, T’s recently gotten WAY into Star Wars and all that entails, including a couple of branded LEGO kits that he got over the holidays, so it’s no surprise that he built this space ship to go along with his X-Wing Fighter and other smaller character sets. T even included such details as the cockpit (where Han and Chewbacca can both sit and see out), the “blue fire” in the back of the ship (including it being built on a blue base), and a sitting area that is supposed to be where Obi-Wan and Luke Skywalker hang out on the ship together. He also tore apart a few LEGO guys to make ones up that looked more like “Han Solo” and “Princess Leia” (he has actual Luke, Chewbacca, and R2-D2 LEGO characters from his X-Wing Fighter and Advent calendar builds). 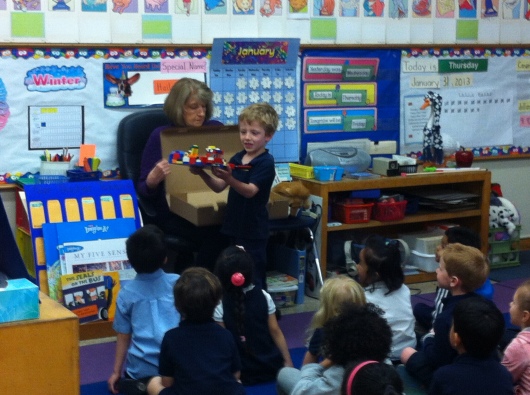 T shares his “Millennium Falcon” with his TK class. This item required us to break the “fits in a grocery bag” rule. While it would have, it definitely would have broke into a few dozen (hundred?) pieces.

The Millennium Falcon build was all T’s work, and he couldn’t have been prouder. And C and I were so proud that he wanted to go to school and show it off to all his buddies and his teacher, too. In fact, I went to school a few minutes early so I could see this particular share day because it was just that awesome. Turns out his classmates agreed. After the “big reveal” they ooh’ed and ahh’ed loudly. When asked where he “got it,” T proudly proclaimed, “I didn’t get it, I made it!” When asked where he “keeps it,” he said he has it with all his other LEGOs but that it will probably be torn apart once he gets home. He was right. The second we got home he sat down and tore that ship apart. 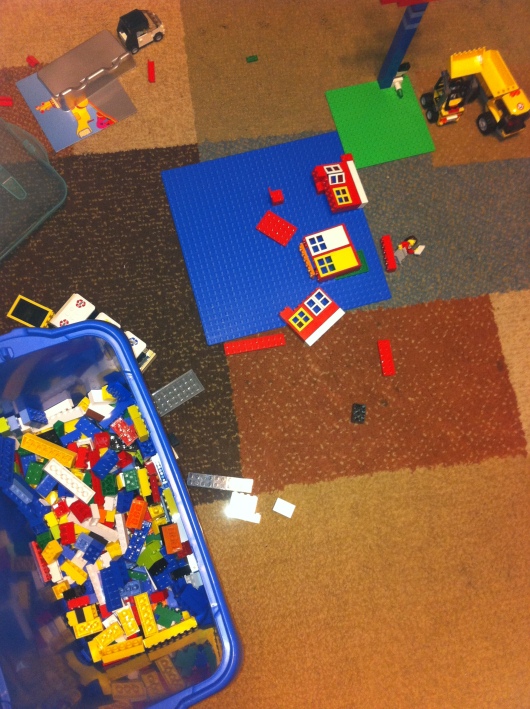 T is hard at work on his next LEGO creation. The Millennium Falcon is no more… for now anyway.

Oh yeah, that’s the other thing. While T is very particular about keeping his official LEGO kits built and plays with those more as toys than sets of blocks, when it comes to his “brain builds” those have a very short lifespan. Probably it’s because his brain is churning out more ideas as to what he can build next and, in turn, what new creation he can take to share with his classmates. 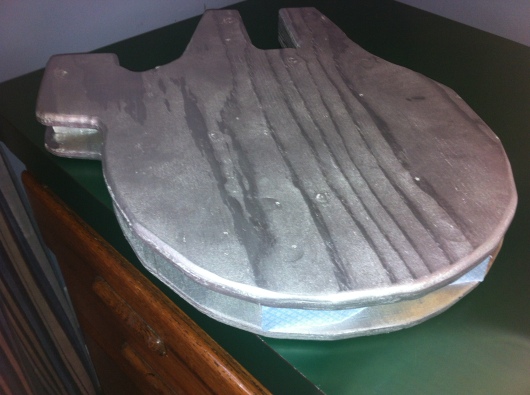 For those who follow me on Facebook, you might already know that this is T’s Millennium Falcon that he built with C in the garage last weekend. It’s since been spray painted silver and it’s been fitted with “blue fire” along the back (the lining of an envelope inset and pasted between the two body parts). It’s also what he took for share day yesterday. I am shocked one of his clues wasn’t, “It’s not a LEGO!”

QUESTION: Do your kids have “share days” or “show-and-tell” (what we called it when I was a kid anyway) at school? What’s the most memorable item they’ve ever brought in?