NOTE REGARDING PRODUCT REVIEWS: OK, RMT’ers, I’m going to take a stab at this product review blogging thing. Meaning, there are now companies who appear to be happy (and eager) to send me free products in exchange for a fair and balanced blog post of my and/or our family’s experience with said products. And I mean a fair and balanced post. These will NOT be phony, positive reviews just because I got something for free; RMT has never and will never be “that blog.” These posts also will be clearly labeled as a “REVIEW” in the post’s title, complete with the product’s official title or name. I’ve also created a new and dedicated Category called “Product Reviews” to keep these posts separate from my unsolicited praises of other products and services (such as my RoomMates post, which was born from entirely organic origins). Finally, REVIEW posts will contain an extremely clear – and legally appropriate – disclaimer at the end of the posting so you know whenever I’ve received a product for free in exchange for my review. OK, enough of that, on with the first REVIEW….

PRODUCT NAME: 100 Wacky Things (You Have to Do While Playing This Game!)
PRODUCT TYPE: Board Game
AGES: 7 YEARS AND UP
MANUFACTURER: PATCH Products,makers of “Hangman” by Lauri Toys and these great magnet activity boards by Smethport (we bought the “Solar System” one ages ago)
RETAIL PRICE: $21.99 USD (manufacturer’s catalog and website price)

100 Wacky Things comes off as an idea of combining a board game with the traditional children’s game “Simon Says” along with a healthy dash of verbal and physical charades. There are four props – a feather boa, silly glasses, elephant trunk nose, and play echo microphone – with four accompanying prop cards, and 96 “wacky” cards (hence, “100 wacky things”). Cards contain point values from 1-12 (the higher the number means the higher the wacky factor), and the player who has the highest point total from their drawn cards at the end of the game “wins” (though a win here is a completely arbitrary victory; players do not have a chance to exercise strategy as card draws are random).

The prop kit from the game 100 Wacky Things.

One of the prop cards from 100 Wacky Things.

At the start of the game, each player draws a prop card and its accompanying prop until they are distributed. In our case, C, T, and I are just three people (you need a minimum of three people to play this game), so T got two props to start. As you can imagine, T loved the props as much as any kid would. However, don’t worry if you have more than four persons playing as the props are rotated through players as the game progresses depending on what the prop card tells a player to do with it (use the prop once and immediately pass it; only use it when a certain action occurs; pass it left or right after someone else does something; etc.). Yes, if you think there’s a lot to keep track of, you’re right… but wait, there’s more!

An “Always” card in 100 Wacky Things means a player always does that act as directed at the start of their turn.

A “Whenever” card tells a player in 100 Wacky Things to perform a certain action whenever something else occurs during the game at any time.

The wacky cards are divided into two categories: “Always” and “Whenever.” If a player draws an “Always” card, that player must always do what that card says at the start of their turn (i.e., T had a card that directed him to ask a player for the exact time at the start of his turn every time). If a player draws a “Whenever” card, they must do what the card says  whenever another player does something specific (i.e., T had a card that told him to shout “BINGO!” whenever another player talked to him during game play, even when not his turn).

Players take turns drawing cards, and cards accumulate equally per player (complete with all their instructions and directions) as “rounds” are completed (a round is one card draw for each player). Players are encouraged to set a limit on rounds before starting game play depending on the number of players involved (the less players, the more rounds, and vice-versa). Why, you ask?

As I said, there’s a LOT to keep track of. C, T, and I only played three or four rounds, but that was plenty of wild and wacky things to keep us happily entertained and not TOO whacked out! C and I not only had to keep track of our cards, but we had to help T read and remember his own cards, too. And we also had to keep watch on prop directions and rotations as well. Also, given that I’d drawn two fairly physical “Always” cards of “crawling around in a circle on the floor” (on a hardwood floor, mind you) and “jumping high in the air five times”(while barefoot on said hardwood floor), yeah, well, I could only do that for so long. Sorry, but I guess I’m getting old… ouch.

I know that I mentioned that the age of this game is 7+ years, which technically puts T two years out from officially being ready for the game and all of its complex directions (see above comments about our having to keep track of his turn, too). However, we made an exception and gave it a try anyway. One, because PATCH Products was so kind to send me the game, and two, because of those darn props. I knew T would absolutely love the dress-up portion of 100 Wacky Things, and I was so right. But he also loved to see his parents playing “that silly game” (T’s nickname for 100 Wacky Things), and really who can blame him for that?! If I were five-years-old, I’d want to see my mom crawling in a circle and jumping in the air, too… over, and over, and over again… no matter how much Mommy might have been in pain doing so.

My wild and wacky T wearing a couple of the props from the game 100 Wacky Things. 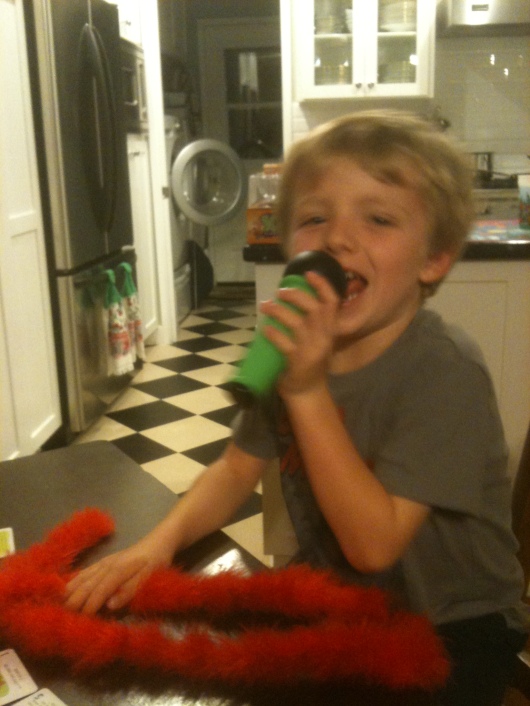 T taking his turn on the mic while playing 100 Wacky Things.

Having said all that, however, even despite my own physical, erm, limitations (i.e. old-assed’ness?!), I was able to easily laugh it off (and medicate later), and T had a goofy good time through the game start to finish both acting his turns out and watching his parents perform, too. He didn’t even care that he didn’t “win” in the end, so that was a win as well! C had fun being a wacky and crazy guy, too (not too much of a stretch there though, RMT’ers). I wish I had more photos of us playing together and having so much fun, but it was hard to stop and photograph all the wackiness without losing track of our turns (seriously)!

The back of the box for 100 Wacky Things. As advertised, the more the merrier BUT also much more to keep track of by way of personal performances! That is why I had to resort to sharing this photo rather than more photos of us playing together.

I think that the next time we dig out this game, we’ll do it when T has a few of his friends over to play, preferably older kids, and definitely ones who have started reading (this game is definitely for readers, RMT’ers, and T’s just not quite there yet). Even better, I can see us pairing each younger child with an adult to keep the game on a faster – and even more fun – pace. Kid-adult pairs also would allow one person to act while the other is the rule keeper of their turn, two brains being better than one and all that. Kids also like to boss adults around with rules, so there’s that added bonus to it also. Hmm, kids bossing adults… now THAT’S wacky!

Disclosure of Material Connection: I received one or more of the products or services mentioned above for free in the hope that I would mention it on my blog. Regardless, I only recommend products or services I use personally and believe will be good for my readers. I am disclosing this in accordance with the Federal Trade Commission’s 16 CFR, Part 255: “Guides Concerning the Use of Endorsements and Testimonials in Advertising.”

One response to “PRODUCT REVIEW: 100 Wacky Things (Board Game)”