And we’re off… to Transitional Kindergarten! Sept. 5, 2012! While we do not walk to school, we do park a ways away and get a tiny stroll in before heading to the school campus.

Well this was the big morning – T headed out the door and off to Transitional Kindergarten! As I only have  – literally – two hours by the time I drop him off, get home, then have to head back out the door for pick-up, this is going to be a short-ish and mostly pictorial post. 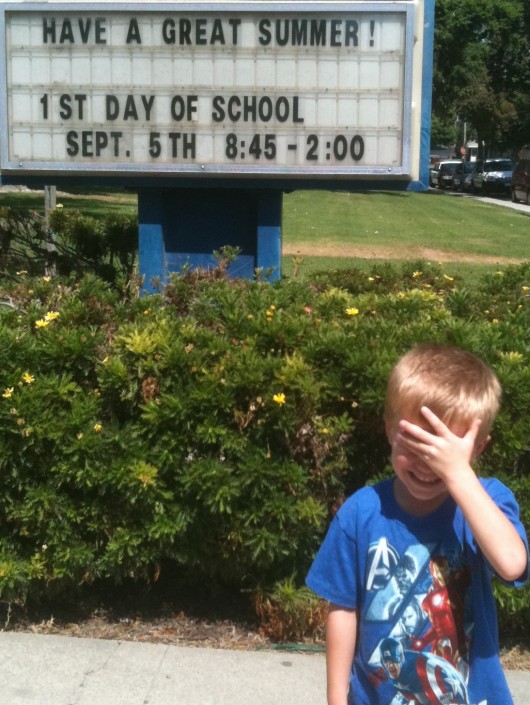 Mom, it’s hot, take the picture already! T in front of his school before heading inside for T-K orientation yesterday (Sept. 4, 2012). 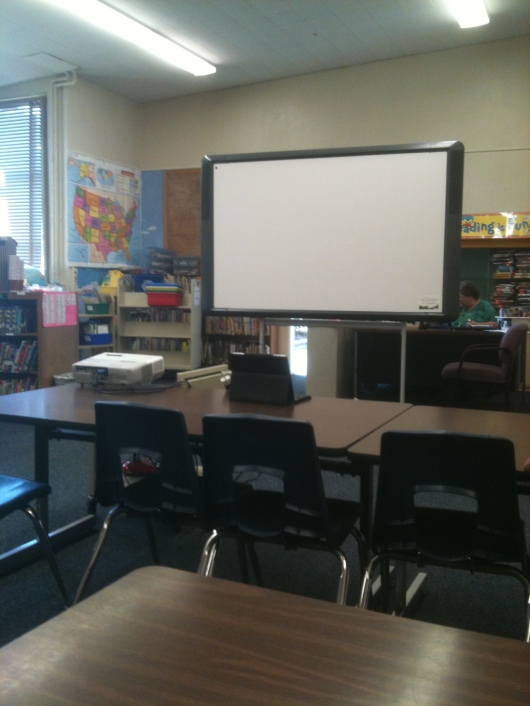 Patiently waiting for class, er, I mean school T-K and K orientation yesterday. Thank goodness we got there early to get a seat; this little library was PACKED with parents and students standing room only and into the hallway outside. Did I also mention it was hot?!

T really is ready for school! Here he is taking “notes” at his T-K orientation.

Yesterday we started our T-K adjustment with orientation. Let me just say, to all school districts, if there’s any way to budget for A/C, please try. Shoving 100+ folks into a school library for an even brief meeting in the height of summer (and humidity) isn’t the best way to get introduced to our new school. But all the same, I am glad we had the 15-20 minutes to meet-and-greet with some key administrators and PTA folks; it always helps to get some faces in the memory before the big days ahead. 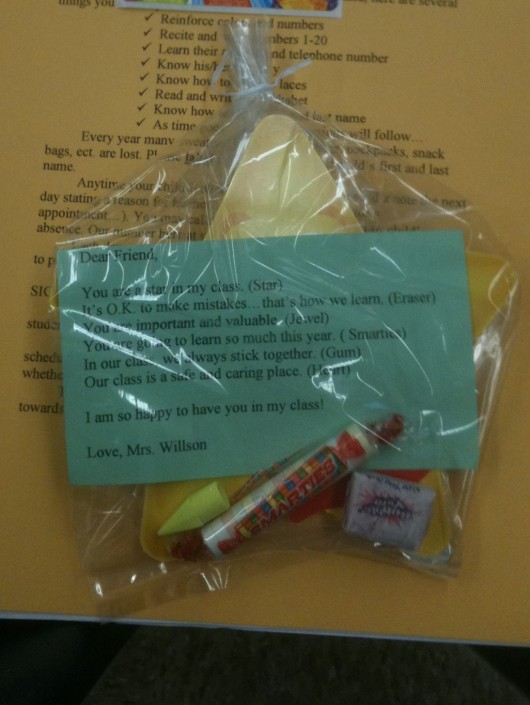 What a great way for a new teacher to welcome a new group of students! Thanks, Mrs. W! 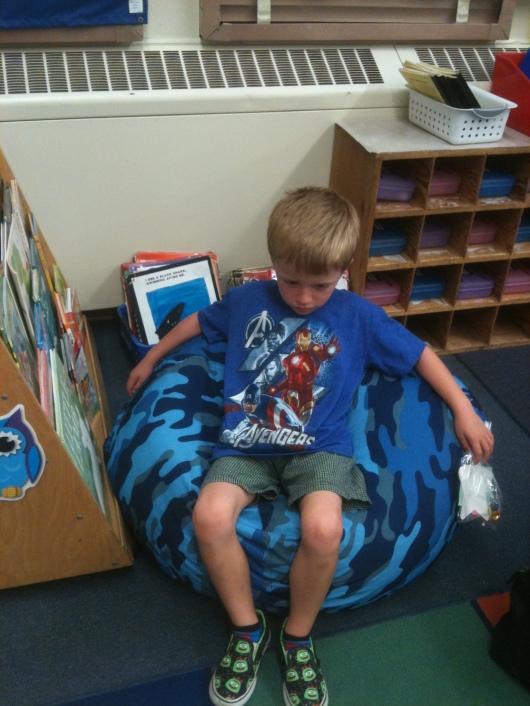 T in his classroom for the first time during T-K orientation day. While he saw the LEGOs and the other little manipulative blocks and such (which we parents encouraged the kids to look at with their eyes not their hands, ha), he plopped right down onto this bean bag. Make yourself at home, T. Oh, and his uncooperative photo attitude was that of a HOT little dude (I, too, was hot and PMS’ing, so we made quite the pair attitude-wise I’m sure).

T playing outside yesterday during the end of our orientation time at T-K. And those planters back there? Well, it’s a little garden for the T-K/ K kids – so lovely! And can I have a tomato, please?

After 20 minutes or so, we were dismissed from formal orientation, and from there we headed on down to our child’s new classroom. T explored a little inside, including picking up a small welcoming gift from his teacher (VERY sweet!), but what T wanted most was to head outdoors and check out the playground (good because, well, it was HOT inside!). In whole, we stuck around about an hour yesterday, just long enough to get acquainted with his new teacher and with lay of the land, and so we knew exactly where to go and who to meet up with this morning.

And with that, I bring you to this morning…

Good morning, T! Yep he was raring to go right away bright and early! I wonder how long this enthusiasm will last, RMT’ers. I hope a long, long time, but I am also realistic. 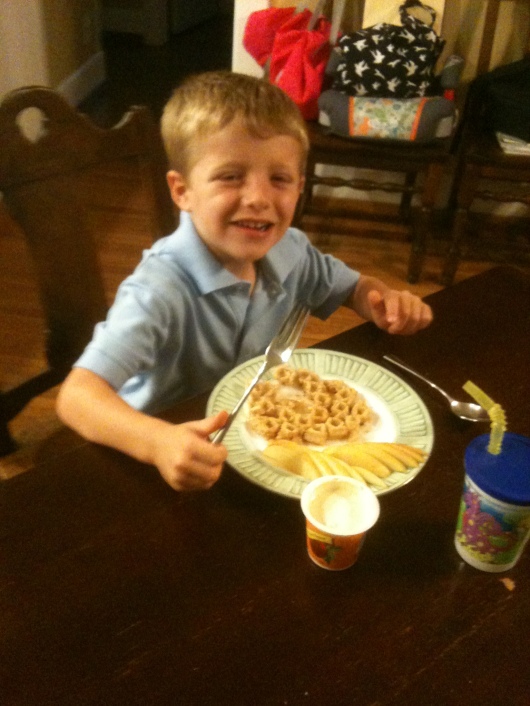 YUM! So at least he ate a little better this morning compared to yesterday. We got some whole grain waffle with “the best syrup I’ve ever had, mom!”; apple; and yogurt.

I packed a lunch, as T requested one and I thought he might need one, but I don’t know if he really needs it now given he’s only at school for three-and-a-half hours. That and school told us that they are offering “breakfast and nutritional snack” times instead (?!). Well, anyway, I’ll check the return contents over the next few days to see if I am overpacking or underpacking food stuffs.

Heading out the door! Yep, it RAINED this morning. So odd, but with how humid it’s been, it’s not totally surprising I guess (?!). Yeah, no raincoat; it let up as we were out the door, so I just shoved one I had in the car into his backpack (he needed something in the backpack other than the emergency kit he was dropping off anyway, right?).

T arriving in front of the school before heading inside! I am so glad we got there early enough to not have to rush or park a half-mile away (oh, I’m not kidding!).

T heading inside school on his first day of T-K. 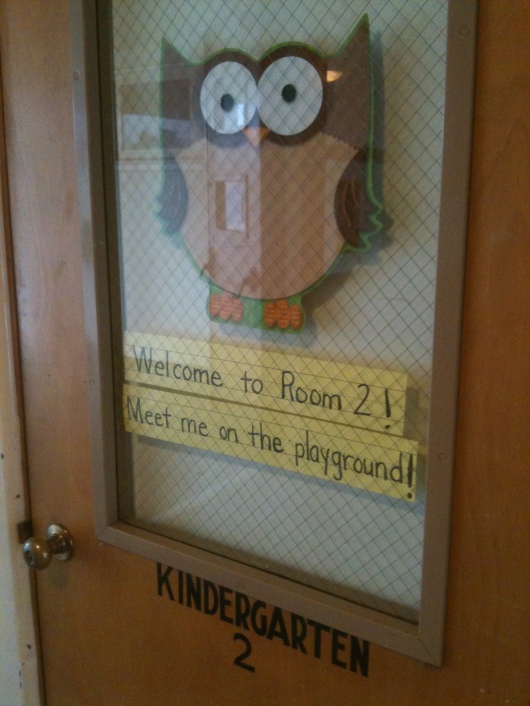 Welcome to T-K, T! And it’s funny… though there’s no photo evidence, I totally wore one of my owl shirts today.

T on the “big” playground before his first day of T-K. Though this play area isn’t officially open to him for a couple of more years, it just shows how “big boy” my T has become.

OK, here’s T outside the fence of the T-K/ K playground. 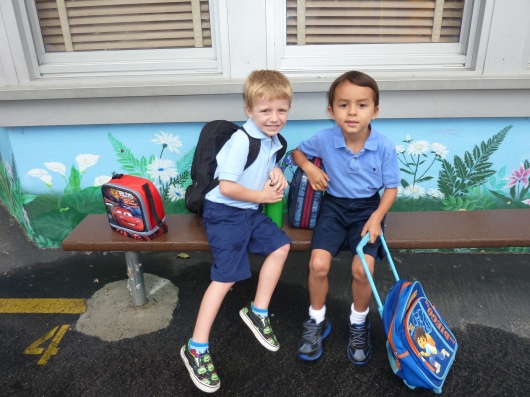 We ran into a few friends this morning, which was nice. This other guy is starting first grade this morning. Big Time! When I said that, his mom laughed. Happy first day to you, too, J!

The playground was wet but in the end, I let him go anyway. This is T with a friend of his from preschool; he starts K in another class down the hall. Nice to have familiar faces around! 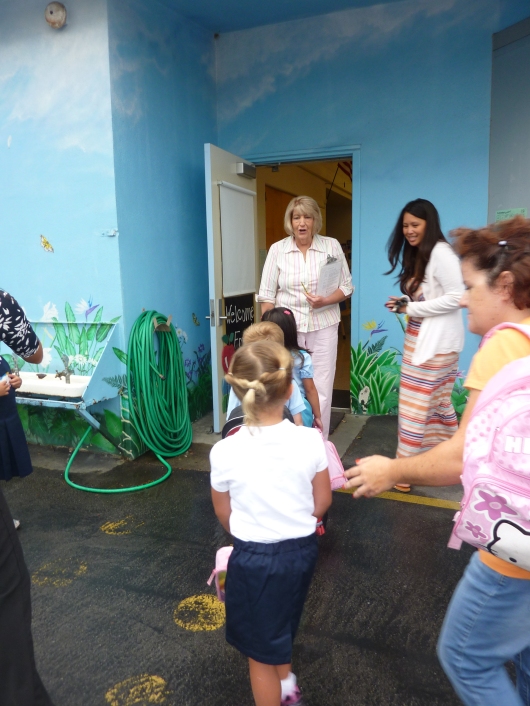 Just like she said she would, Mrs. W. opened the door at 8:45 a.m. sharp! Kids started to line up to head inside for their first day of T-K!

Parents were allowed to come in and take a few photos on the first day of T-K, but then we were asked to head out relatively quickly. No long goodbyes here from T either; T merely waved to me as I headed out the door.

I am going to admit, I botched a few things, the main one being that we were given this name tag to put on our child this morning at the orientation yesterday; I’m going to tell you that I have NO IDEA what happened to it, but it didn’t matter in the end, thank goodness. I forgot that T had told the teacher he didn’t want to be called by his formal first name anyway, and she was at the ready with blank tags and pens to fix the situation not just for T but other parents who failed their first homework assignment (whew, guess that was my free pass!).

Next, after dropping T off, I wandered aimlessly in the halls of the school. I had this pile of paperwork and forms from the orientation yesterday that I was thinking I’d drop in the office, but decided nah I’ll drop it at pick-up if at all possible. Then I was just, well, wandering. I wanted to go back to see what the kids were doing and what the teacher was doing with them, but I didn’t. I then wandered slowly out the double-doors away from the Kinder classes looking back as if I was going to see the kids at the gate or something, but I already knew that they were safe (and dry) inside their new classrooms. The morning bell had rung several minutes before, and yet there I was, along with many other parents, just, well, lingering, almost as if we were lost like we had no clue what to do or where to go from there. Maybe it was a metaphor for how our own kids were feeling, but then again I don’t know if it was that either. T was so sure of the fact that he belonged, so certain in fact that he didn’t even come to hug or kiss me goodbye but just waved from his seat there on the rug of Room 2 (another fail on my part – not getting that hug or kiss before sending him INSIDE, but how was I supposed to know?!).

This morning truly was bittersweet; I almost cried, but didn’t (but I did get a little teary). I was uncertain of my own feelings, but also focused on the fact that T was going to rock this first day of big-boy school. I have a baby boy who’s now this real, live, big boy going to public school. 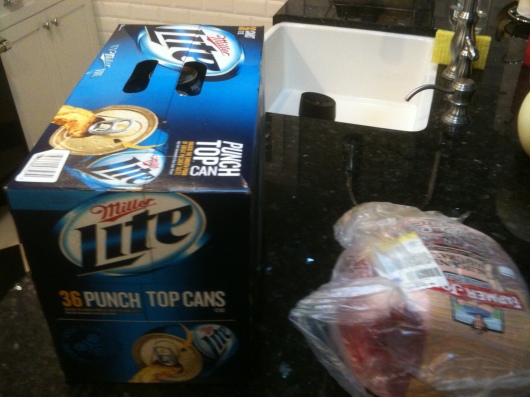 Pork shoulder and a 36-can suitcase of Miller Lite. Happy first day of school AND NFL season, RMT’ers!

So how did I spend the first free hours to myself this morning? Well, writing this blog post for one, and second, stopping at Stater Bros. for a pork shoulder and 36-count suitcase of beer. With NFL and school season both kicking off today, I think this is entirely appropriate.

And now that I’ve finally finished this blog post, sounds like the rain’s come back just in time for me to wind things up here at home and head back into the car to go get T. Well, that was fast!

Happy first day of school, RMT’ers (and if it’s raining where you are, drive and walk safely, and stay dry)!

4 responses to “Our First Day of Transitional Kindergarten, Mostly in Pictures”