A Honu – or Hawaiian Green Sea Turtle – swims in the shallow waters of the Pacific Ocean near the Hilton Waikoloa Village Resort. We swam and snorkeled with several Honu during our latest visit to the Big Island of Hawaii. Honu is sometimes referred to as the second most beloved word in the Hawaiian language (first being Aloha), and after observing these majestic creatures on several visits to the Islands, it is easy to see why that’s the case.

One of the best things about visiting Hawaii is seeing a variety of animals that you cannot find out in the wild anywhere else in the world. Many of the species that live in the islands are endemic to the island chain and not found anywhere else on earth, which makes their sightings just that much more spectacular.

When I noticed several of these “fancy” snails slinking along the sidewalk where we dined one evening, I asked the waitress why the shells were so fancy. She told me she’d never really noticed them before I pointed them out. While they were not the very rare Pūpū kani oe, or tree snails endemic to only the Hawaiian Island of Oahu, they still were very interesting to watch. They were everywhere at dusk!

A Hawaiian Red Crab rests cliff-side along the Kohala Coast of the Big Island of Hawaii. 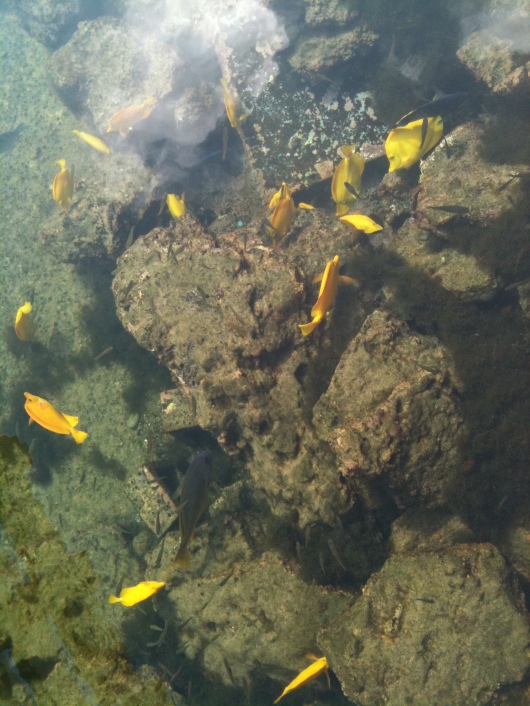 A school of Lau‘īpala, or Yellow Tang. The translation of the Hawaiian name is “yellow tea leaf.”

A lone Threadfin Butterflyfish wanders through the shallow waters of the lagoon at the Hilton Waikoloa Village Resort. The hotel’s lagoon is open to the Pacific Ocean and provides a natural, protected cove for several endemic tropical reef creatures.

We came across small schools of these small, thin, silver fish many times at the surface of both shallow and deep waters while snorkeling around the Big Island of Hawaii. I don’t know if they are Needlefish (A’ha) or something else… do you know, RMT’ers? 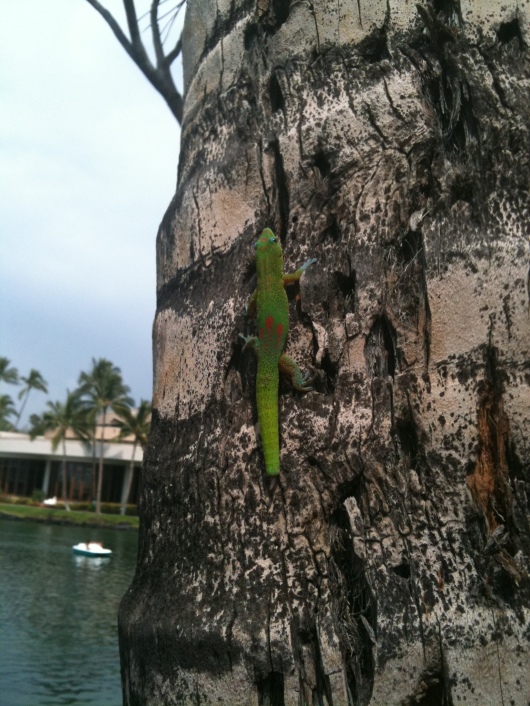 A Green Guardian Gecko, or Gold Dust Day Gecko – also referred to as Mo’o locally – clings to a tree. While these Madagascar immigrants are not the endemic brown geckos of the Islands, these green guys still hold a special place in the hearts of locals and visitors alike.

Look closely and you will see a Manakuke, or Indian Mongoose, running through this miniature golf course. While it seems natural for a mongoose to call a golf course home, the species isn’t native; it was brought to the Islands in the 1880s to control rodent populations in sugar cane fields. Since mongoose don’t really have any naturally found predators in the Islands, nor were they very successful in controlling the rat populations (whoops on both accounts), their population is rampant and not very welcome throughout the Islands.

A pair of Saffron Finches grace us with their brief presence at the Hilton Waikoloa Village Resort on the Big Island of Hawaii.

And then there are the animals that were introduced to the islands anywhere from just over a century ago to just a few decades ago. For example, the Indian Mongoose was brought to Hawaii from Jamaica in the 1880s because of their success in controlling the rat populations in the sugar cane fields, something that probably sounded like a great idea as Hawaii rose as a popular sugar producer to the world. Sadly, that idea didn’t work out so well since rats are nocturnal creatures while mongoose are not. That and it turns out that mongoose have quite a taste for bird eggs, which isn’t a good thing for an island chain with a rare and declining bird population. As to why the Saffron Finch (originally from South America) started appearing in the islands during the 1960s, I do not know (do you know, RMT’ers?). But regardless of where these creatures great and small are originally from, even they have become natives-by-proxy due to their longevity (and abundance) in the islands. 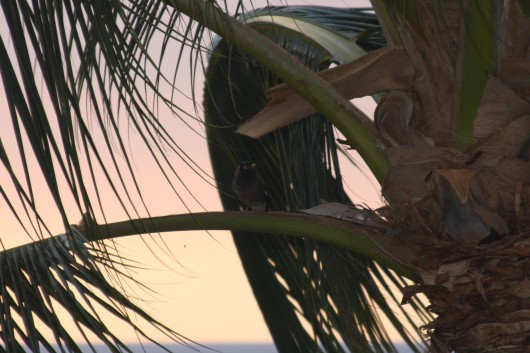 A Common Myna Bird rests on a palm tree at dusk at the Hilton Waikoloa Village Resort. Originally from India, mynas were brought to the Islands to control worm populations in the sugar cane fields. Now one can find (hear?) hundreds of these birds flocking together from dusk until just before dawn. Visitor tip for non-natives: Bring earplugs or you will get a 3 a.m. wake-up call from these beautiful but noisy boys. 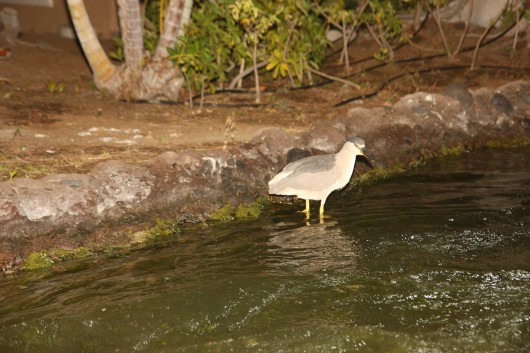 An Aukuu, or Black-Crowned Night Heron, takes shelter along the canals of the Hilton Waikoloa Village Resort. I spotted these birds in the evening just after dusk most nights on our visit to the Big Island of Hawaii.

A Kolea, or Pacific Golden Plover, at dusk on the Big Island of Hawaii. This is a long-distance migratory species that spends late-spring to early fall in Alaska and most of fall and all of winter in Hawaii, so this guy (girl?) should be set to take off for his 3000+ mile, several-hour non-stop journey back to Alaska soon if not there already.

An African Crane named Thumper poses for the camera from his private island home at the Hilton Waikoloa Village Resort on the Big Island of Hawaii.

A small flock of Nene, or Hawaiian Geese, call the Hilton Waikoloa Village Resort their happy home. With a wild population count of just under 1,000 throughout the islands today, it’s still a vast improvement from the lowest count on record of just a few dozen back in the 1950s. Through conservation efforts and the Nene’s reproductive success in captivity, numbers have grown back slowly but steadily over the last several decades. Despite this recent success, however, the Nene remains the rarest goose breed worldwide.

Though Flamingos scream tropical paradise to most, these are the farthest-from-native bird species to the Hawaiian Islands. Some rumors trace the flamingo’s link to Hawaii back to more modern-day luau stories… stories with no traditional accuracy whatsoever.

Two of the Macaws perched in the lobby of the Hilton Waikoloa Village Resort. A rotation of more than a dozen birds greet visitors here on a daily basis and are readily available for a close-up photo opp with you, too.

We are also lucky that we stay at a resort that is so committed to the conservation of Hawaii’s animal residents, endemic and otherwise. The Hilton Waikoloa Village Resort is home to a number of animals, from the bottle-nosed dolphins down at the Dolphin Quest lagoon to a small flock of native Nene, and a short boat ride through the hotel property will introduce visitors to African cranes, dozens of tropical fish, and many migratory birds.

With no true predators on the Hawaiian Islands, feral cats run rampant, with many taking up residence near the larger hotels where there’s never a shortage of food or shelter. Then again, on islands where bird and marine life are in healthy abundance, life’s pretty good for a cat!

Aloha from Hua, a four-year-old bottle-nosed member of the Dolphin Quest family at the Hilton Waikoloa Village Resort. More on all of that – and Hua – later, RMT’ers!

Aloha, my little animal friends… until our next visit!

One response to “The Animal Kingdom of the Big Island”