T hangs out in C's former college town, Davis, CA. Bike racks are rampant throughout Davis due to the city's dedication to being one of the bike-friendliest cities in California, if not nationwide.

While on our road trip earlier this month, as mentioned we stopped along the way to visit Davis, CA. This is a small-ish city (though much bigger now than when C lived there 15+ years ago – !) about 10 miles West of Sacramento along I-80. It also happens to be home to University of California, Davis, which is where C attended University (Go Aggies!). 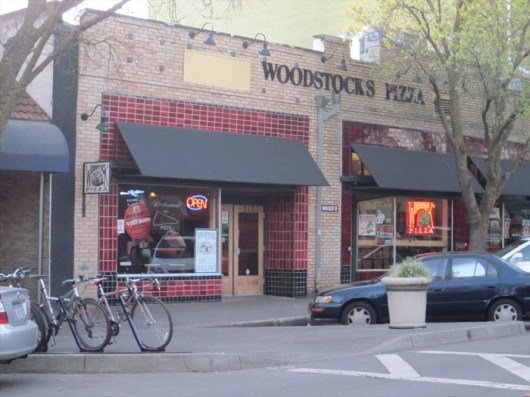 We spent a little time in its downtown area upon arrival, stopping in for lunch at Woodstock’s Pizza, a chain of pizza restaurants here on the West Coast that sets up parlor mostly in college towns. Always good for a dependable slice of ‘za, Woodstock’s delivered yet again with their all-you-can-eat lunch special of endless slices, including the daily special of spinach-artichoke (yum). We didn’t get the drink since they had Sudwerk on tap (more on that tasty deliciousness later), but for around $6.50 per person for just the pizza it is a great deal if you plan to eat two or more pieces (which of course we did… we were hungry from our 7-hour drive!). T even finished his (huge) slice and begged for more of ours, so we know it passed with him as well.

C and T make their way up the steps to the top of the concrete slide at Slide Hill Park in Davis, CA.

After that we headed out on the search for Slide Hill Park, also known as Manor Park but better known as the home of Davis’ concrete slide. This spot was a favorite of C’s while in college, but we had to resolve a couple of challenges first. One, C’d never been to the slide in the daytime, and two, he’d never been asked to find the place sober. Hmm. Anyway, after a little searching around (and a stop in another park first where C thought it was), we finally located an address for it on the Davis Wiki page and headed over.

The full-length shot of the concrete slide at Slide Hill Park in Davis, CA. Hi C and T (look up top)!

Once we arrived, I immediately understood the slide’s draw. This concrete slide was something else: Tall, steep, and semi-dangerous. I already knew at first sight that I was going to play photographer on this mission and that this was all about some quality Dad-and-son time sliding together, and that was a-OK with me!

C and T headed up the steps with the cardboard sheets left behind by other sliders. They took their position at the top, then headed down the entire height of the slide. 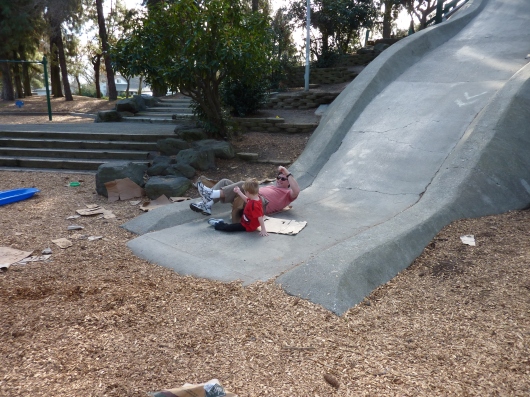 Oops! Yeah, the end is a doozy over at the concrete slide in Davis' (CA) Slide Hill Park. 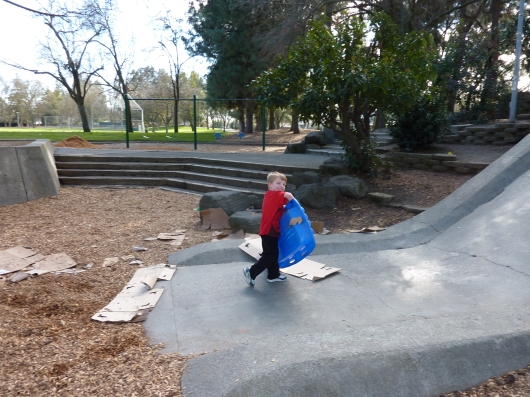 T's smile shows it all: He loved the concrete slide at Slide Hill Park (Davis, CA)!

All the cardboard (and one plastic slide) left at the bottom of the concrete slide at Slide Hill Park in Davis, CA. 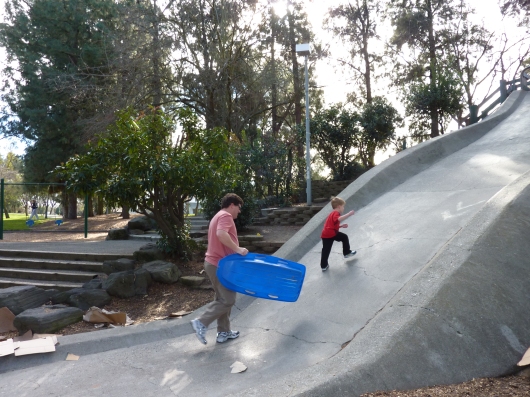 C and T head up the concrete slide for another ride down at Slide Hill Park (Davis, CA).

But look, someone else was even kinder and left behind a much sturdier plastic snow-sled. C knew immediately that compared to the cardboard that taking this sled from the top of the slide would be waaaaaaay too fast for T, so the two of them hauled it about halfway up from the bottom of the slide instead. 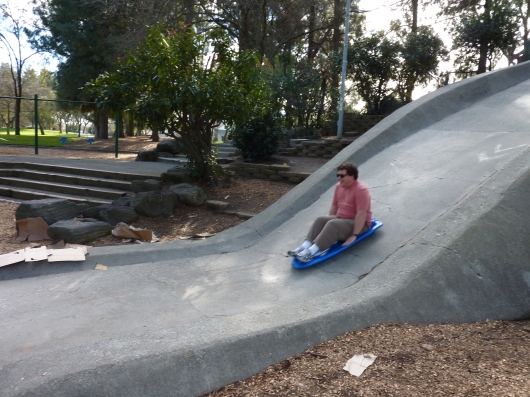 That was a perfect idea because from that point on, T was pretty self-sufficient in grabbing, hauling, and sliding all on his own, only requiring minimal assistance with getting on the sled to launch. 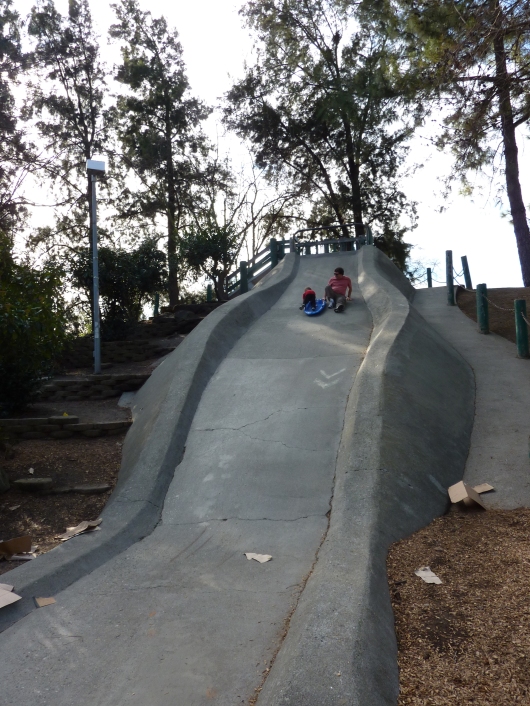 More good times at Slide Hill Park (Davis, CA). It's funny though... as friends of ours enjoyed their annual "snow weekend" in the mountains for sledding and other wintry playtime, here we were enjoying our own version of winter sledding. Notice no jackets required, RMT'ers! I love California! 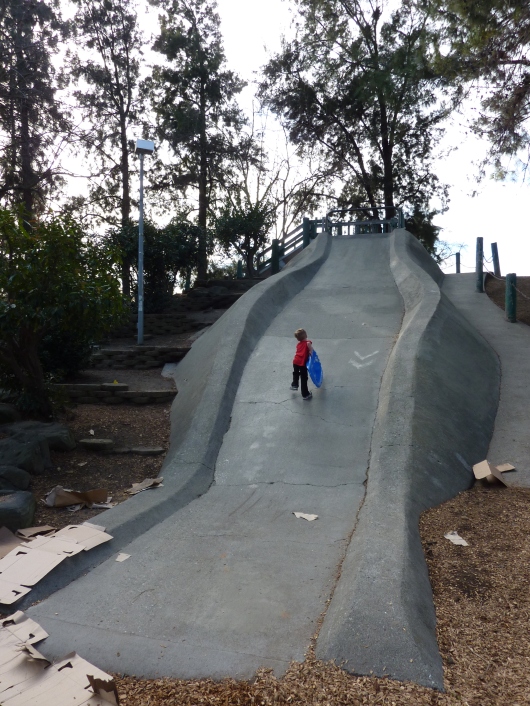 T getting his slide on down the concrete monster at Slide Hill Park (Davis, CA).

The end of the run for T at Slide Hill Park (Davis, CA).

For about 20 minutes, the boys had a blast, shooting down the concrete hill one at a time over and over again. I am so glad we persisted and C was able to re-discover Slide Hill Park. Albeit C’s most recent experience there was from a very different point of view, I’m fairly certain it was just as good as he semi-remembers it from years ago, maybe even better.

A liter of Sudwerk Märzen at their namesake restaurant and brewery in Davis, CA.

Finally, no trip to Davis, CA, is complete without a stop at the Sudwerk Restaurant and Brewery. This was another favorite of C’s while attending UC Davis, so we made time for a dinner here while on our little journey. Honestly though, we weren’t going for the food but for the brew; one of C’s favorite beers of all-time if not his ultimate favorite is their Märzen, and it was just as fantastic as he remembered. Sudwerk is also infamous for serving liter-sized steins of beer, as pictured above.

A Sudwerk Taster Set offers one each of a miniature (L-R, from what I remember) Seasonal IPA, Märzen, Hefeweizen, Lager, and Pilsner.

I however opted for Sudwerk’s Taster Set. I was undecided on what I wanted, so what better than a few swigs of five different varieties? And look how cute these teeny-tiny mugs are? Cheers – times five! 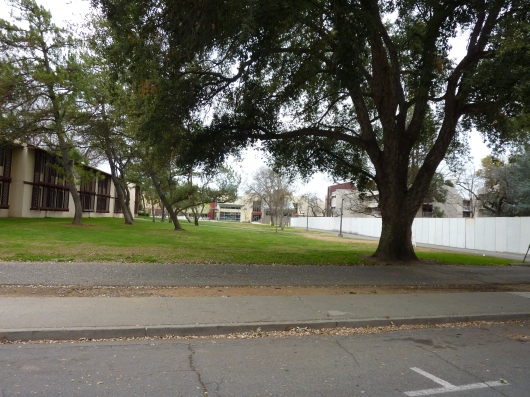 We did drive through the portion of UC Davis' campus where cars are allowed, and that allowed us a drive-by view of C's former Freshman-year commons (there back in the distance, center-photo).

Next time you and your family set out on a road trip, keep your Alma Mater in mind for stops along the way, and not just for the usual walk around campus. Visiting parks and kid-friendly restaurants in the college town where you grew up so-to-speak are just a few of the wonderful ways to introduce your kids to a lovely part of your own history without boring the pants off them. And you get to relive a little of the good ol’ days, too… well, relive what you can semi-recall anyway.